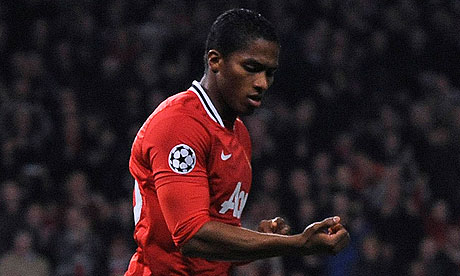 One early goal and one late deflected strike were enough for United to see off Otelul Galati at home and move to the top of Group C. A turgid display had few positive points but a win and a clean sheet mean that the bare minimum standards have been met.

Here we discuss the talking points and invite all football fans to join in the discussion.

It had been mooted in some circles for a little while but tonight we got a 90 minute glimpse of Wayne Rooney, the central midfielder. With Carrick and Cleverley injured and the decision to rest Fletcher taken it left either the unfit Gibson, versatile Park or inexperienced Pogba to battle it out with Rooney for a CM starting spot alongside Anderson. Jones could have played there too but he was needed at the back.

As an experiment it was fine. It’s hardly surprising that Rooney was able to perform the role with ease – incisive passing was combined with good defensive positioning. Only Nani ran further than him on the United side (12km vs. 11.6km); he was as tireless as ever.

There is something criminal though about having to play your best player out of position. Fortunately Fergie said post-match that it is just a short-term measure. Rooney’s far better higher up, linking the midfield with the forwards and getting into dangerous goalscoring positions. He’s simply wasted in the midfield although it would appear to be an option later on in his career when he’ll no longer be able to charge around the pitch all game.

Boring game… where was the big score?

The BBC record that United had 63% possession and 17 shots on goal which sounds like a Barcelona-type performance. The reality couldn’t have been more different. Slow football with few good chances meant for a really dull display. Too often United were comfy on the ball simply pinging it in triangles before it was inevitably given away and then won back and the process would start again with another triangle.

A win’s a win and some fans would rather play rubbish and win than drop points playing well – I put myself in the category of the former fan but even so and with all due respect to Galati, this is a team United should have put five or six past in some style.

Seemingly the days of killing off ‘weaker’ teams are over, this is how we used to do it:

There are more examples but you can see how United used to be ruthless. One argument may be that the standard of our opposition has improved but Otelul Galati were fluke winners of the Romanian league and were expected to get destroyed at Old Trafford tonight, even by the Romanian press.

It’s another reason why I always prefer the league over the Champions League. There’s never a league game where you’d see United look as lethargic and cocky as they did tonight; it was almost as if they knew they’d win tonight so they didn’t have to try. It makes for predictably unspectacular viewing. In my match preview I suggested that tonight would be “routine but ugly” – I didn’t think it would be quite that ugly though.

The good and the bad (or in Anderson’s case, the awful)

Rooney’s performance has already been touched upon; aside from him the two players to stand out in a positive manner were the fullbacks, Jones and Fabio.

It’s quite scary how natural it looks for Jones to be an attacking fullback. On a night where he didn’t really have to defend he was allowed to roam down the right hand side linking up with Valencia and other players to good effect. On a couple of occasions he was unlucky not to get his first United goal. He also provided the cross from which United scored their opening goal.

Fabio, like Jones was exciting in the final third. He was able to play a full game injury-free and whilst his defending still leaves unanswered questions at times, there’s little doubt how good he is going forwards. His direct running and eagerness to get to the ball before anyone else make him hard to stop – he provided some good crosses off the back of telling runs. Evra, whose form has been inconsistent may now find his left back berth under some pressure if Fabio can stay fit long enough.

There are four players I wish to level some kind of criticism at after tonight’s showing. The two wingers, Valencia and Nani both had poor games. Valencia scored the early goal but aside from that he looked scared to take defenders on and his crossing was erratic. Whether he has confidence issues or he needs a run of games to get fully fit or he’s still suffering from his injury, he wasn’t of a good enough standard tonight. Nani was hardly involved in the game but when he was his output was poor. There was too much unwarranted show-boating and not enough of the simple things done well. He’s a good footballer but has had a poor few games and badly needs to get his mojo back. If there’s one thing he did well though, he tracked back and helped the team out a lot.

Saving the worst till last I’ll quickly cover Berbatov now. For a player who was yet to start a game at home this season and in fact had only played 30 minutes of Old Trafford football in over two months, this should have been a wonderful opportunity for him to show off and give Fergie something to think about. After his good performance at Aldershot he was poor again tonight. His build up play was often too slow as he took too many touches or ran the ball away from his team-mates into pockets of Galati defenders. He did play as per usual a couple of magical passes but his involvement was disappointing. He had chances to score too but his failure to hit the net now means it’s 1225 minutes in the Champions League since his last goal – that was over 3 years ago. Not good enough at all from a top striker.

Finally, Anderson. I’m not sure I’ve seen a worse central midfield display. Maybe I was a bit quick to label his performance “amateur” on Twitter but it was the shocker of all shockers. I can excuse shots off target and the odd ambitious pass that is over-hit but being unable to play either the right ball or a pass just a matter of yards is inexcusable. He seemed to always be one second behind play and despite Rooney’s holding of a deep position, he chose his forward runs poorly.

This graphic sums up Anderson’s lack of attacking impetus: 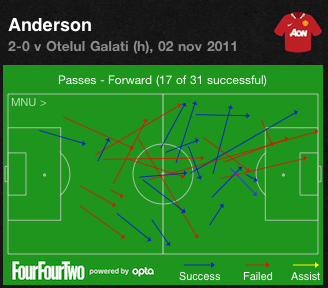 Stats don’t show the whole picture but less than 55% of Anderson’s forward passes found a United player. For so long Anderson has been waiting for his chance in the first team on a regular basis. Despite his good start to the season his form has tailed off and arguably tonight he only got in the team because of injuries to other players.

Fergie’s problem of not having players in form is an issue, particularly as most of the out-of-form players are midfielders. It’ll be interesting to see if he does decide to go into the transfer market in January but he’s still left with the same old problem – he has some very talented kids but they’re just not quite ready yet. Does he buy a player and maybe stunt their progress? Or does he try and keep it as it is for another year until the kids are ready?

For a team that a Romanian journalist commented on by saying…

“If I could give some advice to their coach it would be to recommend they don’t even try to attack and score a goal – it could get ugly, really ugly if United play at full speed”

…they weren’t all that awful. They created almost nothing but their approach to the game was surprisingly positive. They set up to press United high up the pitch, creating little space or time for United to play their normal game. As it happened, United found ways round this, playing triangles around Galati’s players but there were numerous occasions where Evans and Ferdinand or Rooney and Anderson looked up to see a blue Galati shirt right in front of them. The turnover of possession was therefore quite frequent in the game and it took some rather scrambled United defending to get the ball clear.

Galati are yet to get a point in the Champions League this season but their desire to attack every time they got the ball suggests that if they have the same approach in their final two games they may yet get a historic point.

At the end of the day, all that truly mattered was that United won and moved to the top of Group C. Valencia’s early tap in from a Jones cross was the only goal until late on when Rooney’s long range shot was deflected in and awarded as an own goal. Plenty of players showed that they’re really out of form right now but there were, amongst some of the younger faces on show, some slight positives. Michael Owen’s injury to his thigh early on may see him out of action for a short period of time but expect to see plenty of unenforced changes to the side when Sunderland visit this weekend.