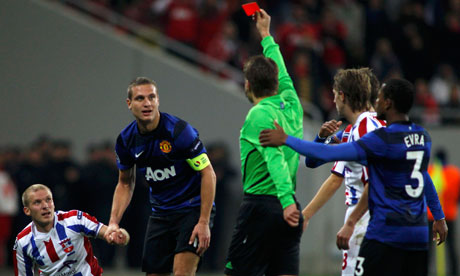 Man United can extinguish Otelul Galati’s slim chances of qualification beyond Group C tomorrow night. Galati, yet to get a point in the group play in arguably the biggest game in the club’s history.

It’s two weeks since United travelled to Bucharest and beat Galati 2-0 thanks to two Rooney penalties. Since then, the Romanian side have been in good form, notching up three wins in a row. A double header, away then at home against Târgu Mureş finished 2-1 to Galati on both occasions whilst most recently they beat Gaz Metan Mediaş 1-0 on Friday night with a goal from Cristian Sârghi.

United infamously followed up their win in Romania with a derby day defeat against Man City. The 6-1 mauling though was followed up by two wins and two clean sheets – first away to Aldershot in the League Cup and then on Saturday lunch time away at Everton.

United will be without captain Vidic who’s suspended for two games after his red card in the last Champions League game. Smalling, Cleverley, Young, Carrick and Giggs also miss out through injury but Rafael and Gibson both return to the squad after long lay-offs. The BBC also report that Evra is not a part of the squad despite training today (I think they may have missed him out by mistake though).

Youngsters Zeki Fryers, Larnell Cole and Paul Pogba are all included in the squad for the game.

Galati are missing Filip, Sălăgeanu and Buş through injury, and also have defender, Perendija suspended. Fergie’s team selection is made fairly easy in many ways given who’s not available. United must win the game so although the opportunity to rotate a few players will probably be taken, a team strong enough to win will be picked.

It seems about right for Lindegaard to be rotated back into the side for a game. Ben Amos played last week at Aldershot so Anders may well get another chance. The back four pretty much selects itself. Rafael needs games but may not be ready to start, so Jones should continue at right back with Ferdinand and Evans in the middle. At left back, Fabio could be given a chance ahead of Evra who continues to come in for heavy criticism from fans for his recent showings.

In midfield the central pairing should offer no surprises with Carrick and Cleverley unavailable. Anderson needs to regain some early season form whilst Fletcher’s still trying to find some consistency. Barring a Gibson return or Park/Rooney deployment in the CM area it should be those two. Out wide, Valencia needs minutes and Nani needs to find his top form again after a couple of disappointing games.

Up front Fergie has the luxury of six fit strikers out of seven. Only Macheda is missing but any two from Owen, Diouf, Welbeck, Rooney, Berbatov and Hernandez should be ok. I’ve gone for Berbatov and Rooney – the latter isn’t easy to drop whilst the former needs minutes and has probably earned a start.

The two sides have only met once, that was two weeks ago. Vidic was sent off for a high tackle but United still pulled through with Rooney scoring twice from the penalty spot to seal a win for the Reds (who played in blue/purple and black that night!).

United fans have surely learnt now that this season the unexpected should be very much expected. On paper this came has ‘comfortable win’ written all over it but no doubt it’ll be harder than it should. Still, I fully expect United to win and I shall predict a routine but ugly 3-0 win.

Marijo Strahonja – it’ll be his first ever Champions League game.

Sir Alex Ferguson on Cleverley: “Tom won’t play tomorrow. It is not serious. He got a little tweak on Saturday but we have to take the long view. We need to make sure he will be available for a long period, rather than play him again and the decision comes back to haunt us, so I think he will miss the Saturday game also.”

Galati coach, Dorinel Munteanu on the Man City result: “That game was an accident. A result such as that can happen to anyone. Manchester United are still a very big team and we will have the utmost respect for them.”

Galati coach, Dorinel Munteanu dreams of a draw: “A draw would be a dream. If we look our group, the biggest rival we have is Basel because we are trying to finish third. We have to keep going until we play them because that is when our fate will probably be decided but you never know what might happen before that.”

Want to learn more about who Otelul Galati are? Then read our Q&A with Radu Baicu, a Romanian journalist and football scout . If you’re on Twitter, he’s worth following for his regular insight into Eastern European football and much more. Please take a few minutes to check out and read his blog too – Scouting Romania – it covers all the bases of Romanian football.