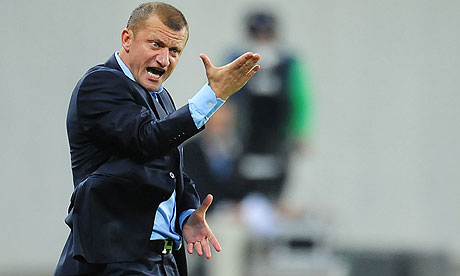 After a tough weekend’s draw at Liverpool, United fly out to Romania to play Champions League newcomers, Otelul Galati. Aside from being new to the competition, they’re new to Man United and very much new to most fans (myself inclusive). In order to get some background information about the team, we’ve spoken to Radu Baicu, a scout and journalist based in Romania. Here’s what he had to say…

1. If you can, summarise Otelul Galati’s history – what kind of a club are they?

Formed in the 1960s to represent the steel factory from Galati, the biggest in the country, the club rarely managed to compete with the best from Romania, only breaking into the 1st division for the first time in 1986. Before the ultimate surprise/performance last season, they had managed a top four finish once in 1988, with the UEFA Cup offering them the chance to play against mighty Juventus. Otelul even won the home game 1-0, before getting hammered in Torino (lost 0-5), but in central midfield there was a certain Marius Stan who is now acting as the chairman and has to take a lot of credit for the recent success.

2. The rise of Otelul Galati is quite astounding. How did their first title come about and how expected/unexpected was it?

It was a huge surprise as there were no less than six title contenders and, if you can imagine – Otelul weren’t really among them. But they went top and with the others focused on each other and only waiting for Otelul to stop winning and return to mediocrity, they were only really challenged in the last third of the season. By that time, Munteanu’s tactics were played to perfection by a bunch of otherwise mediocre players and the discipline, the hard work and the enthusiasm cancelled out the superior quality of the other title-chasing teams.

3. How do Galati play domestically and are they likely to change their approach for United?

In Liga I they are playing below what they showed they were capable of last season. It’s not surprising as everyone’s not only aware that a repeat of last year is unlikely, but also the team are back to their usual level of play. The enthusiasm is gone and, after a few bold statements, they realise that getting a single point in this group would be a small miracle.

4. How can United hurt them? Where are their weaknesses?

Applying a fair amount of pressure should be enough to make their defence commit a mistake and with United’s flowing passing game it shouldn’t be a problem. Sir Alex Ferguson could easily rest a few players and still comfortably win.

Gabriel Paraschiv needs to be stopped as he’s intelligent enough to capitalise on any weak United moments, although he’s not a problem if kept away from the goal as he lacks pace. I’ve noticed that John Ibeh has been getting more minutes this season; as inconsistent as he is, he can produce extraordinary moments with central striker Marius Pena, already scoring a nice goal in the Champions League and looking a threat with his physical game.

6. Do you think they can surprise United and get at least a point?

Not a chance. In fact, if I could give some advice to their coach it would be to recommend they don’t even try to attack and score a goal – it could get ugly, really ugly if United play at full speed!

7. Give us three reasons why Reds should visit Galati!?

Three? That’s a bit tough, we’re talking about a small industrial town, I would have difficulties identifying one. The good thing is that the home game will be played in Bucharest, so that should make the trip more interesting for the fans. Some of them will have been there quite recently, United played Dinamo Bucharest a few years ago.

8. What has happened to the likes of Steaua and Dinamo București in recent years?

Well, the blame goes to the club’s owners/shareholders who always try to interfere too much when the reality is that they seriously lack any expertise in strictly football matters. They are now facing a lot of pressure from their own fans, who have inevitably turned against their own teams, making the comebacks even more difficult.

9. Just how good was Gheorghe Hagi?

To me he was really fantastic, having grown up watching him play, football’s best always meant Hagi as far as I was concerned. But I have to admit that I had a soft spot for a certain Gheorghe Popescu as I watched more football and learnt more about the game, he was an elegant type of centre back able to command the defence and push the entire team forward, surging through the centre of the pitch with the ball at his feet. Let’s not forget he used to captain Barcelona, which to be honest, is something no other Romanian player will be likely to do!

10. Finally, tell us something useful to say in Romanian at a football match?!

I can’t think of anything that could be useful, maybe only a few words to taunt Otelul, but let’s not add to their misery, ok?!

Alright, if you say so!