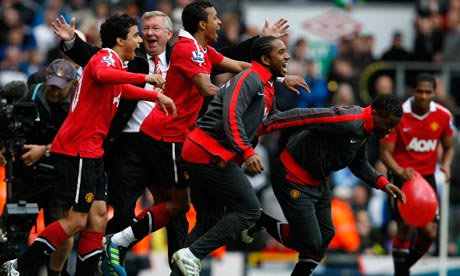 As Sir Alex Ferguson celebrates his 25th anniversary in charge of the club there are hints once again that he’s not ready to retire yet. Is it possible that the great man may yet deliver one final present to United fans, his best yet?

A scary thought, Ferguson will be 74 at the start of the 2016/17 season. Personally I think five years may be a stretch too far but suppose he’s still in charge in four years time, is it really possible that his final team could be his best yet?

During his time at United, Fergie’s forever preached about squad cycles – how established players must be moved on to make space for a new generation of talent to take over. Building a good squad is hard enough but rebuilding is even harder. Fortunately it’s something Fergie has seemingly mastered over the years with each new squad winning some kind of silverware.

Last season’s squad at the end of a cycle, but some cycle it was. Three Champions League finals in four years and four league titles in five years and two League Cups represent possibly Ferguson’s peak years in terms of success. Attempting to follow that up is the kind of challenge no manager wants to have bestowed upon him however as the team start a new cycle this season, Ferguson may be on the verge of one of his finest ever teams.

Granted, that’s hard to imagine right now with the team playing some ugly football and a midfield that looks rather dysfunctional, but bear with me.

United’s current squad is far from complete, the start of a new cycle doesn’t mean that the phasing out of players is over. Indeed in this squad there are a few players who are being phased out right now – Berbatov, Carrick, Vidic, Evra, Giggs, Park and Ferdinand – not bad players at all but over the next 24 months it seems likely that a younger player will take over from them and keep a spot in the side for some time.

For all the doom and gloom surrounding recent showings, consider the talent coming through: Cleverley, Smalling, Jones, Welbeck, Da Silva x2, Morrison, Pogba etc. What makes this start of a cycle different from many others is that there are so many young talents in one batch and they’re truly young, they’re not 22-24 and starting to reach their peak, they’re in their late teens or early 20s and already getting exposure and being recognised on an international level.

In four years time, at the start of the 2015/16 season imagine a team like this: (ages in brackets) Of course it’s all hypothetical and based on current progression but that side to me is scarily good and yet not overly unrealistic. It has everything – grit, flair, pace, power and experience. No player is older than 29 but it’s possible that most of them will have already racked up 200 first team appearances at least for United.

We may not be able to compete in the transfer market any more but we have a manager with incredible vision. Given the experience those players would have by that point and that many would still not have reached their peak, it is seemingly possible that Fergie’s final team, the side he’s gearing us towards now may just be his best yet.

In the time between now and then we need to patient. That’s hard as football fans; managers and players are more often than not judged on their present achievements and failings. If Ferguson has taught us anything though it’s that hard work and a bit of faith pays off. This current side may not win the league this year – if they do it’ll be a fantastic achievement given the changes going on; however years of potential dominance again are not far off.

I for one cannot wait to see what the next few seasons bring and if we kick off in 2015/16 with a team like the one I’ve suggested and with Fergie still at the helm, then fun times may be ahead. Bring on year 25 of Fergie, and 26 and 27 and the rest…