“Where did it all go wrong?” George Best was once asked by a waiter delivering champagne to his hotel room, whilst standing next to Miss World (on a bed) and a big pile of money. You may think that is a ludicrous question to ask one of Manchester United’s most gifted footballers of all time, but – if you think about it – his mind was elsewhere and not on football and that glorious God given talent he had previously showcased to the world. Ok, so Miss World involved may have made the story up (no doubt George Best was in a number of those situations over the years!), but the moral of the story is that even though you’ve obtained something that you perceive to be superior to what you once had, it isn’t always that way. Take Mr Eden Hazard earlier in the week and his Twitter announcement that he would be signing for the European Champions. Twenty odd years ago you’d be amazed to think that you could stalk, sorry I mean follow, your favourite footballers via a computer/phone app – but, if you think about it, its all a bit naff really.

In the wake of Sneijder’s doomed move to Manchester United last year, many ‘Reds’ pleaded with the Dutch playmaker, via Twitter, to move to pastures new in M16. Has this moved on much from the 70s and 80s where fan mail would be sent? Back then you’d be excused if you were a ten year old kid who had a weekly subscription to Shoot magazine, but nowadays, you’ve got grown men (and women) pleading with ‘transfer targets’ to come and sign for ‘your’ team. Its mental. Even the lovely Mrs Sneijder was sent abusive tweets when her husband decided to stay at Internazionale last August. I’m sure these hard nuts would say the exact same if they saw either of the Sneijders out on the street or in a trendy bar. No? Too busy eating pot noodles and playing Football Manager I suspect.

This leads me to the rise of the ITK (in the know, you know the ones), exclusive chasers and one of the big problems on Twitter within the football community. Some journalists should hang their heads in shame for attempting to pass off ‘news’ as their own without checking any relevant source of authority. The need to ‘break that exclusive’ and to be the first Twitterer to Tweet something about it – no doubt hoping your penis will grow from the shrivelled acorn it sadly is. What is this phenomenon? Am I out of the loop? #GGMU? #BELIEVE “I follow back”. Sorry, what am I suppose to do with this? This is the main reason I’ve shunned Twitter for a number of months now.

Don’t get me wrong. I think its a great invention and I loved debating about football with mature, sensible likeminded fans when I joined in 2008. But then it got a little weird. You didn’t have to have ever played the game (at whatever level) to be an expert in Korean second division football. You can spout passing statistics (that you’ve just taken off goal.com) around like it means something. Lastly, you can of course use as many ‘cunts’, ‘bollocks’ and other pointless expletives to show how manly you are – a complete contrast to your ‘real personality’. Reinvention via Twitter.

So to Eden Hazard. I’m sure I’ll get the odd “You’re jealous” moronic comment from a Chelsea fan in his bedroom, cock in hand waiting for the latest Kate Upton video to finishing downloading – something that completely backs up my points above. The whole thing with Hazard is that I preferred the old days of looking at the latest backpages and seeing who you were linked to – or the gossip columns on the BBC. ‘United linked with Kluivert’ screamed The Sun. ‘United lose interest in Kluivert’ shouts The Mirror. Not to sound like a Granddad, but I preferred those days. Now you have thousands of potential ITKs trying to be the first to claim “Hazard turns down United” – yep, I’m an official source. Some buffoon had claimed he’d seen Hazard at Manchester Airport, and people believed him – constantly refreshing their Twitter to see whether or not the news was actually true! Then Twitterers venting their frustration at the rejection (no doubt underneath their United duvet).

To be honest, I sound quite grumpy and – like I said – I’ve had a number of superb footballing debates over Twitter and I do think its benefits far out weighs its flaws. I just don’t like the need to be loved, to be followed to be listened to! Even Hazard should be lambasted for his cock-tease Twitter flirting. The egotistical clown. But like we saw with the ‘Glazer dead’ fiasco earlier in the week, many high profiled journalists and ITKs retweeting and commenting on the events live on CNN (there were no events live on CNN) should be ashamed of themselves. Not simply because it was inaccurate. Not because it was untrue and totally made up – but because their ego got the better of them in this virtual made up world. 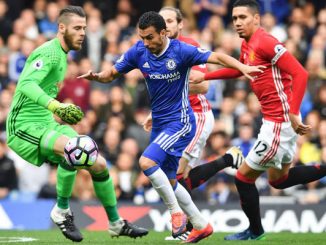