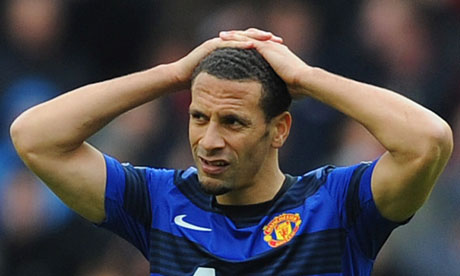 Rio Ferdinand is back in the England squad to face San Marino and Montenegro as Roy Hodgson finally rewards United’s number five for his tremendous form this term. This time the news wasn’t announced to passengers on the London tube, nor did the England boss not want to hear questions about Ferdinand, as he remarked following England’s victory over Brazil last month – but its official, Rio is back playing for his country.

Although I thought it was mind numbingly obvious pre Euro 2012 as to why Ferdinand was so ridiculously omitted from the squad, some of the contributors in the comments thought otherwise. Everyone is entitled to their say (although I’m not sure how many of them turned a computer on to angrily type their response), but surely now, it is obvious, Hodgson was wrong not to include him in the first place?

Ferdinand’s qualities as a defender are obvious for anyone who has watched the game. When he was younger he was exceptionally quick, but was criticised for being too lethargic, at times, gifting the opposition the ball. As he matured as a player, you rarely saw him give the ball away and his confident stride to step from the back into midfield was commonplace up and down the grounds on a Saturday. His reading of the game is exceptional and he makes interception after interception due to his immaculate positioning. I’ve spoken to many reds over a pint that have placed Ferdinand as one of their two central defenders in an all time United Xi. Surely a player of his calibre, still playing for a big club at the top level, would be considered for a place in the national squad, no?

Keeping in mind this is a United blog, 75% of you felt that John Terry was the main reason for Ferdinand failing to make the grade for the national team. This poll was run before Euro 2012, so these voters were obviously oblivious to any future omissions following the Chelsea captain’s retirement from International football. Ferdinand has never been shy in admitting that he has always wanted to play for the national side, despite the snubs over the past eighteen months and has regularly vented his frustration over Twitter. He tweeted “What reasons?” just after the announcement last summer in response to Roy Hodgson claiming it was indeed “Football reasons” for his omission:

But if we take a look at appearances last season, Rio made more than Steven Gerrard who would captain the national team at Euro 2012. Some critics may claim that you can’t compare a midfielder to a defender, although – for me – I think that is irrelevant in the point I’m trying to make. You want your best players at major tournaments and based upon last season’s performances, Ferdinand was one of England’s top defenders. Many of the comments in that previous blog were surely due to the fact that they didn’t like the player or the club he plays for, unfortunately – thats the Internet nowadays! If Rio Ferdinand was playing poorly, getting caught out of position – giving the ball away and getting out paced, then there would be a case – however, he has been superb yet again this term. Gareth Bale gave him the run around in the 3-2 defeat to Tottenham at the beginning of the campaign, but to be fair – you’d expect that to happen on the odd occasion from the class that Bale offers.

Ferdinand has played in 21 Premier League fixtures so far this season, thats the same amount of appearances as Danny Welbeck, one more than Wayne Rooney and two more than Tom Cleverley. All three players started in the Brazil match last month. Yes, yes – again people will cry (again) “but Ferdinand is a defender” – you’re telling me he wouldn’t offer more quality than Gary Cahill, Phil Jagielka, Steven Taylor, Joleon Lescott, Ryan Shawcross or Chris Smalling? All of whom have been branded about as better players than Ferdinand. But remember, the likes of Paolo Maldini and Alessandro Costacurta both played into their 40s and still won trophies at a late age – not to mention they’re both defenders! Maldini may have retired in 2002, but that was his choice – I’m sure the Azzurri would have welcomed his qualities even in his late 30s, no?

You need to plan for the future, in every walk of life – but surely combining both experience with youth is key in football? Evans has developed extraordinarily well this season playing alongside Rio Ferdinand, so much so – Evans started the game against Real Madrid in the Bernabeu ahead of Vidic (who was carrying an injury, it has to be said). His development is obviously down to his own ability and club coaching, but you do play better when you’re playing with better players – anyone, even at amateur level will tell you that. Obviously, we want Rio Ferdinand to steer clear of injury as we embark on the infamous squeaky bum time title run in, and we want Ferdinand to appear in all of Manchester United’s remaining fixtures, but surely it is quite clear the real ‘reasons’ as to why Ferdinand was originally omitted from the squad. Little to do with football, I feel.