The La Liga champions are long-time admirers of the Red Devils’ number one and came within a whisker of signing the star stopper on transfer deadline day in 2015.

Reports that Madrid will return for De Gea this summer have been widely circulated in recent weeks.

The latest development sees Balague provide inside information that states United could let the goalkeeper move to the Santiago Bernabeu if the Spaniards offer Morata and €25 million (£22 million) in return.

Mourinho (strangely) willing to sell De Gea for €25m and Morata. Chelsea divided betwn Lukaku & Morata. He would like to play in the PL 2/2 pic.twitter.com/72qyjCUwkJ

The Premier League side’s search for a new attacking star has been a hot topic of conversation in the press of late, with plenty of names linked with a move to Old Trafford.

Morata is repeatedly touted as a possible target for Jose Mourinho, while United have also been linked with Andrea Belotti, Antoine Griezmann, Kylian Mbappe and Alexandre Lacazette.

The Spanish centre forward has found himself behind Karim Benzema in the Madrid pecking order this season, starting only 14 La Liga games this season.

Morata made a further 12 appearances from the bench, scoring an impressive 15 goals in the capital city side’s domestic title triumph.

However, with the 24-year-old desperate to play more regularly and recently admitting that his future is up in the air, a move to United makes sense.

The former Juventus striker has all the attributes to be the Red Devils’ attacking talisman and a star capable of firing the club towards major silverware.

Despite this, sanctioning a move to send De Gea the other way would surely be a risky ploy for the English side given the goalkeeper’s importance to the team.

The former Atletico Madrid custodian has proven himself as the Premier League’s most-consistent stopper over the years and has saved the Old Trafford side countless points.

As such, should the swap deal happen United would gain an exceptional striker but need to replace one of the most-able goalkeepers in the world game. 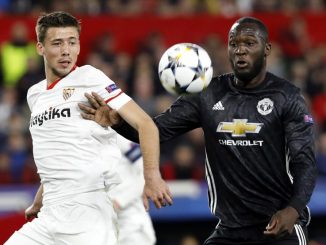