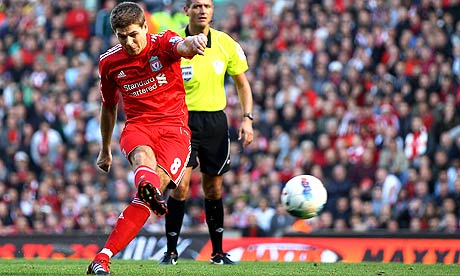 There was a typical Fergie surprise when the teams were announced before kick off – no Rooney, Nani, Hernandez or Anderson were starting. Instead, Jones played in midfield for the first time and Welbeck was asked to play up front alone. Steven Gerrard made his first start in 7 months for Liverpool and his goal saw them take the lead midway through the second half. Hernandez’s equaliser with nine minutes to go meant the sides had to settle for a point each. Here we discuss some of the key talking points from the game and welcome discussion from both United and Liverpool fans.

The absence of Rooney, Nani, Anderson and Hernandez was intriguing but casting that aside, Fergie got it spot on and appears to be learning from past mistakes at Anfield. For once he matched Liverpool in playing a 4-2-3-1 or 4-5-1 or 4-4-1-1… whatever people are calling it these days.

To understand why it was the right decision to name a team in possibly a defensive set-up one has to remember that United have been outplayed in the past three years at Anfield and overrun. Today was not like that though – United turned up and showed guts and grit ensuring that the opening 45 minutes were boring. Boring’s good as it meant Liverpool weren’t on top and weren’t finding space easily. 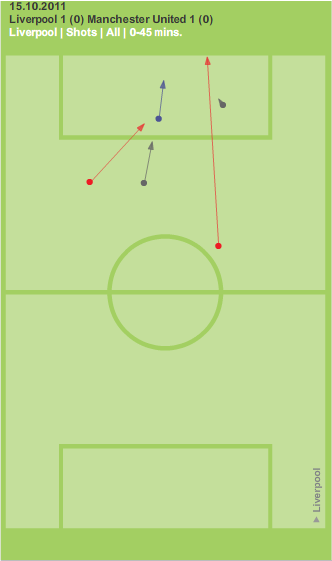 As can be seen, Liverpool were restricted to only a few shots in the first half – only one of which was a good chance which Suarez in the end hit straight at De Gea whilst under pressure from Evans. In previous years, United have been too bold and left too much space particularly between their midfield and defence – something Liverpool have exploited.

The second half though produced a much more open affair as both sides tried to up the tempo. The beauty of Ferguson’s selection was that his bench contained frighteningly good ammunition – Nani, Valencia, Hernandez and Rooney. The aim was surely to keep the game tight until around 70 minutes and then start to take some risks to try and win it. As it happened, a goal from a set piece meant that the subs became enforced changes. Up to the goal though, Liverpool were still restricted to having the majority of their shots from outside the area and only managed one on target from inside the box. Ferguson’s plan had worked – in open play, United had stifled Liverpool and the subs came on to produce a goal – sadly it was an equaliser rather than a winner.

For all the wins so far this season, one thing has been grating on fans – the insecure defence. Not helped by injuries, United have been often lethargic at the back, allowing too many shots and opposition players too much space. Today though, Smalling, Ferdinand, Evans and Evra were excellent as a unit and as individuals. 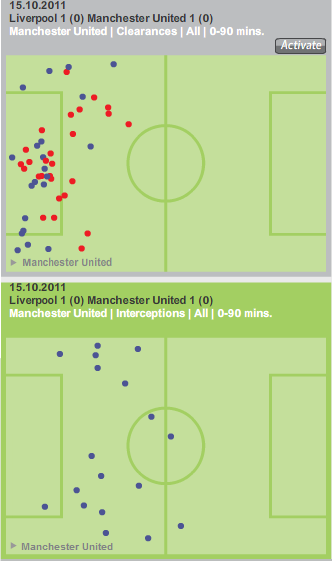 Kept busy all afternoon, United’s defence rose to the challenge. Smalling returned from injury to offer a classy option down the right and repelled Enrique and Downing excellently. Ferdinand had a couple of scary moments but ultimately his quality shone through – calm in possession and he handled Suarez superbly. Evans continued his outstanding form, reading the game well and regularly nipping in front of Liverpool players to cut out crosses. Evra’s form had dipped but he was back to his beastly best ensuring Kuyt had an anonymous game. Of the 18 interceptions United made, 10 of them were made by defenders. Liverpool’s team made only 17 clearances all game – United’s defence alone accounted for 39 of the team’s 48 clearances.

A better defensive performance meant a slightly less-busy-than-usual David De Gea which in turn provided a new challenge for him – concentration. He’s been kept busy in previous games and passed the test of having to make regular saves. Today though, he had only five shots to save – one, he couldn’t, the goal however he made fine saves for the other four. All were spread out over the game and he was merely a spectator for long spells as the game was battled out in midfield. David’s all-round game appeared much more fluid as he caught, punched and kicked well. For a change the media were praising him at the end rather than dissecting weaknesses.

Vidic’s return will only further boost United’s back four but he’ll have one hell of a challenge trying to dislodge Evans. It’s interesting to note that a solid back four showing coincided with Jones being removed from the defence. Now, let me make it clear, I think Jones will be a superb footballer and areas of his game are already excellent but he’s been a little bit of a liability at the back and his unpredictable nature has possibly unsettled the defenders around him. Still, his time will come.

At Blackburn, Phil Jones played in midfield in front of the back four quite a lot. It’s something I’ve wanted to see United try with him for a couple of reasons – firstly I think our midfield could do with his balls and secondly his over-enthusiastic runs and lack of positional awareness wouldn’t be as costly as they have been at the back.

However, trialling Jones in midfield is not something I’d have done at Anfield.

It was fairly clear early on that Jones was uncomfortable in midfield. He looked lost as Liverpool players moved between the lines – unsure whether to drop deep or charge up high. In fact, he ended up trying to close down Liverpool defenders for much of the first half – admirable work if it weren’t for the fact it left Fletcher on his own (Giggs never seemed to be there) against three Liverpool central players. 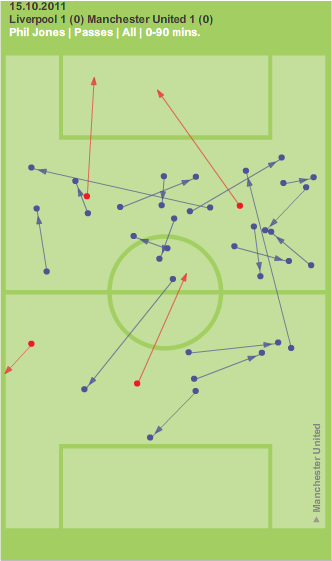 Jones was taken off after 76 minutes having played only 22 passes – not enough of a contribution for a central midfielder (at the same point Fletcher had attempted 52 passes and Giggs, 35). Potentially Jones was tired, he’s played a lot of football already this season at a high intensity; however I think it’s more likely that the game was just too big for him to be playing in midfield.

I think Jones in midfield can be a viable option but this just wasn’t the right game to try it. More testing needed.

As unpopular as it may be, I thought Gerrard had a very good game – not quite man of the match material but a very impressive showing after 7 months without a start. His energy was excellent, chasing down United players until the last minute and he showed himself to be calm and sensible in possession. Maybe the flip side of his return was that Suarez appeared a tad isolated at times but nonetheless, Liverpool are a better team with Gerrard in it. Now, where are my 19 fingers to hold up…

For what it’s worth, I think Liverpool are starting to put together a decent squad but if there’s one thing that I don’t like about it, it’s the diving which put simply is cheating. Rio Ferdinand admitted post-match he got a very slight touch on Charlie Adam for the foul from which Liverpool scored the subsequent free kick, however the faint touch certainly wasn’t enough to make all 25 stone (I’ve made his weight up, it’s probably more than that) of Adam suddenly come crashing down to earth in the way he did.

That incident is the obvious one to pick out but the diving can be extended to Downing (terrible attempt at a dive in the first half) and Suarez who is the worst culprit. I know Nani has been a drama queen in the past but Suarez drops to the ground every time he’s touched, I’ve not seen anyone that bad since Ronaldo’s debut season at United. Ferguson commented on it after the game, telling the BBC, “the boy Suarez dives all over the place” – he’s not half right.

Quick mention for Danny Welbeck. Asked to play up front on his own he put in a really selfless performance. He chased Liverpool defenders down all day and picked his times to drop deep and link up play well. His strength and determination to both keep and win the ball ensured United were able to clear their lines knowing he’d invariably get possession or force Liverpool backwards. To cap it all off he got a really important flick on from Nani’s corner from which Hernandez scored. Another really mature performance from the 20 year old, well done Danny.

A certain improvement on recent seasons – defeat was avoided. Whilst some might describe United as toothless in attack at times, they’d be overlooking the fact that the defence were superb at keeping Liverpool at bay. Gerrard’s free kick should never have gotten through the wall but at least Giggs has his testicles in-tact. The response to going behind though was excellent and Hernandez’s excellent finish ensured a hard fought but satisfying point was won. Kudos to De Gea for some good saves, particularly one at full stretch late on to deny Henderson a spectacular winner. United jet off to Romania next to play FC Oțelul Galați on Tuesday (a must-win game) – but most eyes will already be on next weekend when City come to Old Trafford. Top spot has been relinquished for now but United remain unbeaten and are finally looking solid at the back.