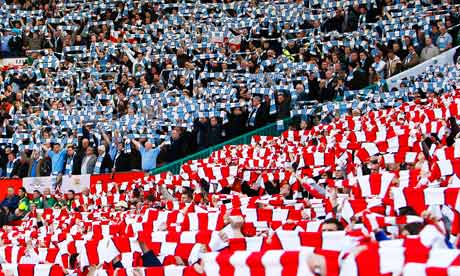 As most experts predicted the 2011/12 title race seems to be gearing up as a straight race between three clubs – the two Manchester clubs and Chelsea. With the potentially pivotal Manchester derby fast approaching, we take a general look at how each side is shaping up tactically this season, and discuss the potential areas for improvement of both.

Sir Alex Ferguson’s men had started the season with aplomb, thanks in part due to a fantastic pre-season outing in the US. Key to this success was the astute and timely transfer dealings right at the beginning of the transfer window; swiftly dispatched were the fantastic servants Brown and O’Shea and coming the other way were David De Gea, Phil Jones and Ashley Young, whilst Tom Cleverley and Danny Welbeck were recalled from season-long loan spells from Wigan and Sunderland respectively. Ferguson was thus able to try out his new players in a variety of new systems, whilst at the same time understanding the key strengths of his new side.

Though the initial enthusiasm has waned somewhat in recent performances, injuries to key players such as Vidic, Ferdinand, Cleverley, Hernandez and Welbeck have essentially forced Fergie’s hand – the rotation of personnel (as well as asking players to perform different duties at times) has increased beyond the normal amount expected, meaning that United have failed to field a consistent first 11 since the first few outings. Jones for example has played in three different positions, Young likewise; with Smalling, Giggs, Park and Nani other players to have been given a variety of tactical instruction. The fluid front four that was so prosperous at the start of the season (a slight move away from the archetypal 4-4-2) have yet to re-discover their collective mojo, and even in full-flow, Ferguson will be acutely aware of the pitfalls of such an attacking approach: a vulnerability to the counter-attack against the top sides.

It is the centre of midfield then where United seem to have the most concerns (as discussed last season at Stretford End), and is in part the reason for the sheer amount of chances the team are conceding at present (116 in the Premier League to date). Given that Ferguson did not recruit to this area of the team (an area he himself admitted needed strengthening), United have had to rotate players such as Carrick, Fletcher, Giggs, Park and Jones, in the hope that a suitable strategy is found for the tougher games in the schedule ahead. In the first five games (including the Community Shield), Cleverley and Anderson looked mightily impressive, yet were unlikely to be selected as a partnership (certainly without another midfielder in close attendance) against opposition such as Chelsea, City, Barcelona and Real Madrid – even before Tom’s injury lay-off and Anderson’s reversion to type. Fletcher is yet to get back to his battling best, having faced a peculiar viral setback in the last few months, and Carrick’s protection-possession game, whilst vital in Europe and perhaps even the ‘bigger’ teams in the Premier League (though not selected against Liverpool), is often unsuited to the fast-paced and frenetic domestic game if he is paired in a double pivot with Anderson or Fletcher. Perhaps the returning Cleverley will be the perfect foil for the England international. More importantly, if the team is to rediscover its form prior to the festive period, the midfield unit as a whole must work harder to press together, and also bring the defensive line up with them as they did at the outset of the season, condensing the playing zone just beyond the half-way line.

Part of the problem with the midfield dynamic has been brought about by default: the procurement of Hernandez’s services, and indeed his devastating progression, has meant that Ferguson has had no other option but to select the Mexican striker; and whilst this has freed Rooney somewhat (with Berbatov, he shared creative duties), and allowed him to regain some of his creative flair in between the lines, the corollary of that has been the reduced productivity in central midfield as discussed above. There is greater onus on wide play then, and Young and Nani have been superb, but again United seem to have problems attacking the box in numbers from a deep and central positions. Welbeck’s emergence too has perhaps further propelled the notion that 4-4-2 is the best way forward for the United manager. Both he and Rooney have alternated in a deep lying forward role to great effect, though it has become increasingly obvious that Rooney is not suited to the particular role in a central midfield trio; he seems to lack the discipline to do so, but more pertinently, having finally blossomed into the world class player we were anticipating, the deep position undoubtedly hinders his ability to impact the game, stifling his output.

Is Ferguson working towards a ‘total football’ system whereby the defence merges seamlessly with the midfield (Jones, Rafael, Evans and Smalling are the latest batch of Fergie’s fledglings who are confident in bringing the ball forwards) – and the midfield likewise with the forward positions? Only time will tell, and though the current predicament isn’t a crisis by any stretch, United must find a solution in the shorter term (City at Old Trafford) and as part of the wider season’s ambition as a whole.

For Mancini, the jigsaw puzzle seems to be slowly coming together. He has strengthened in the key positions of defence (Savic and Clichy), attacking midfield (Nasri) and centre forward (Aguero), and a more cohesive 4-2-3-1 seems to be the result. Though doubts still remain about the ability of the Italian to mastermind a title win given his lack of experience managing a large squad (including the many egos that accompany the task) across the course of a fixture-clad season, City seem geared up to challenge the aristocrats of the League.

One apparent flaw to the current system seems to be the balance between the central midfield and forward lines (which seems paradoxical given they are the league’s highest scorers, but bear with me). Last season, whilst Tevez took the plaudits for an outstanding individual contribution, this was largely due to the lack of cohesive attacking approach play, and the fact that as a false 9 Tevez was always likely to be the player around whom most of the attacking play revolved. Toure was given the instruction to play slightly further ahead of both De Jong and Barry in a central trio of midfielders, and whilst he did a tidy job in this position (10 goals and a handful or assists), it was clear that there was still work to do in terms of the finesse of City’s approach in the final third.

Since Tevez’s demotion (largely since the start of the season), Aguero’s impact has been devastating, which has coincided with a more central starting position of David Silva – changing the application of the 4-2-3-1/ 4-3-3 considerably: working horizontally across the pitch, seeing more of the ball, and creating goal-scoring opportunities for others (the most in the league thus far). Mancini has often gone with two forwards this term also – the pairing of Aguero and Dzeko has worked surprisingly well because the latter is able to work the channels and come inside if starting from a wider position, and the Argentine combines jinking wizardry with a deadly eye for goal. We then have Nasri’s introduction to the side, which has given the manager a further dilemma; does he play a very narrow 4-4-2 with Nasri and Silva used as inverted wingers, or does he continue with his favoured system which places such a great emphasis on the control of the ball in the central midfield area?

It is an important question, as the knock-on effect on fan favourite Yaya Toure – last year one of two central creators of the team – has been considerable. This season has seen the Ivorian pulled slightly further back, but not quite as deep as De Jong or Barry, meaning that he is typically playing as a ’90’s box-box midfielder with no real defined role (much in the same way Anderson finds himself at United). It is a role he can play, having done so at Olympiakos and Monaco, but his runs from deep often crowd the attacking zone – at times meaning that creative duties are shared between he, Silva and Nasri. It is a catch-22 for the manager, as Toure’s passing range is vastly underrated, but restricting his capability by deploying him in a similar destroyer role to De Jong is seemingly counter-intuitive. Then there is the fullback situation which is so crucial to a narrow way of playing, and an area in the team which the Italian is still yet to find a winning formula for – Clichy, despite a downturn in form in the last two seasons or so is an astute signing and if he can get the Frenchman to play, he can provide that crucial width and attacking nous in the final third, which Kolarov has henceforth failed to do. Richards and Zabeleta are exchanged according to the opposition, and Johnson is the other wide player who is struggling to offer a sustainable solution.

City are clearly working the system to their advantage at present (as their high standing would confirm), but it is a work in progress as Mancini is keen to reiterate. The imbalances in the system – both tactically and otherwise – are there for United (and other teams, as we have seen in the Champions League) to exploit as the season progresses.

Though placed first and second in the Premier League standings, it remains clear that both Ferguson and Mancini have issues to be resolved tactically. In short, United seem to be struggling with the space just in between defence and midfield and have struggled to control the middle zone post-Scholes; whereas City seem not to have found the ideal solution in the final third.

Ferguson may yet live to regret the failed pursuit of Sneijder in the summer, and even though Cleverley’s progression has been superb, we are yet to see the full fruits of his transition (via a season’s spell at Wigan), and it would be incredibly harsh to expect so in his first ‘full’ season at United. City have progressed in the last 6 months alone and the system is much changed since the move away from a static 4-5-1 system; they have benefited from clever signings, though are perhaps still a striker and a defender short.

Given the fact that it is very much a squad game in the present day, a perfect 11 is no longer the be all and end all and the league’s outcome will surely come down to whichever manager rotates the most astutely. A personal feeling is that City will just fall short given their lack of experience – with the ever-present Chelsea (and wily new coach Villas-Boas quietly going about his work with great endeavour) fighting United all the way to the finish line.

3 Comments on Manchester: A City United in ambition