Manchester United made one of the biggest transfers during the January transfer window, when they acquired Alexis Sanchez from Arsenal.

There is no question the presence of the Chilean should improve the side dramatically, but apparently The Red Devils are not done yet. Jose Mourinho is reportedly after Nice midfielder Jean Michael Seri. If you recall his name, it’s because Seri spent most of last summer linked with a move to FC Barcelona, but in the end he stayed with the Ligue 1 side.

Seri is far from being a household name in Europe. In fact, few casual fans might know him since he plays for a rather small team in France. Nice have had great success over the last two years, but they were a rather small team not too long ago. But we are here to give you a detailed description of the kind of player the Ivorian is.

First of all, Seri could be defined as a deep-lying playmaker. He does not thrive on a more attacking role, and he is better suited to play as a central midfielder. He does not thrive defensively either, but he can get the job done when it comes to positioning defensively and tackling. It is worth mentioning that Seri is not a defensive liability. In some ways, he is a similar player to Ander Herrera but a bit more gifted tactically.

For what is worth, the Ivory Coast international has registered one goal and six assists in 26 matches for Nice this season. Those numbers are not eye popping, but they show he can definitively create chances. That is what the team needs since there is already a lot of depth on the attacking end.

Where would he fit in the team?

It is a bit unclear to see where he might fit with the team right now. Nemanja Matic and Paul Pogba are the clear-cut starters at CM, and there are quality options off the bench such as Herrera, Marouane Fellaini, and even the youngster Scott McTominay. But the scenario could become quite cloudy once the current season ends.

If United can’t extend Fellaini, then the Belgian would likely leave the side during the summer, and Carrick will retire. McTominay has all the tools to be a decent player, but he needs more seasoning. At this point, going out on loan to either a Championship or a Premier League side seems like the best move for him. As such, Mourinho would only have Pogba, Matic and Herrera as alternatives for the CM role. In that scenario, Seri would add some much-needed depth and quality. After all, the Ivorian has emerged as one of the best players in the Ligue 1 over the last two seasons.

As such, Seri would fit as a perfect first-choice replacement for the CM role, but he is talented enough to start if given the chance.

Would he be a good signing?

If we put those things into context, then signing Seri certainly makes a lot of sense. But United would have to act quickly. Barcelona could easily target him once again this summer, and PSG are rumoured to be tracking him as well. And we can’t forget about Arsenal and Liverpool, as both teams usually are on the race for almost every single top European player.

Seri, 26, has a release clause of around £33 million which expires at the end of next season. If United want to sign him, they must move quickly. Otherwise, he will become either too expensive, or will be out of the market all together. 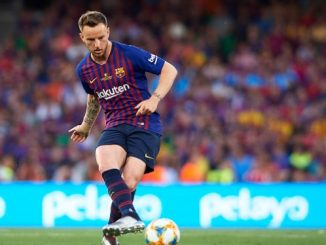 Manchester United Looking At Ivan Rakitic – Does He Fit At Old Trafford?