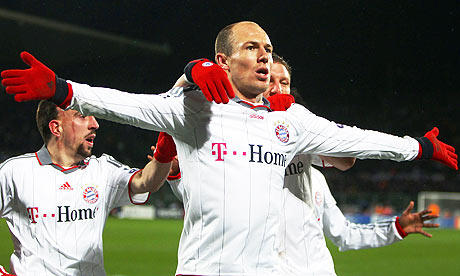 Tonight, Manchester United face Bayern Munich in the first leg of the Champions League Quarter Final – despite the media billing it as a chance for the Germans to get revenge for their final defeat of 1999, they already have that after knocking United out in 2001. The two teams played each other again the following season in the group stages, with two draws. The game tonight will be a totally different game with barely any survivors from that trio of ties. Stretford-End.com gives a brief analysis and preview of what to expect.

It is United’s first competitive visit to Bayern’s new home, the “Allianz Arena”. In pre-season, we made the visit there, and after beating Boca Juniors, were defeated by the hosts in the “Audi Cup” on penalties. The stadium is certainly an impressive site from the outside; acting as the host arena for Bayern, 1860 Munich and the national side, the ouside of the arena actually illuminates into the specific colours of the side that are playing there.

The Managers / the Line-ups

You’ll need no introduction to Sir Alex Ferguson and his methods but it’s worth noting that at the ripe old age of 68 he has yet again molded his side into a new dynamic following the exits of Ronaldo and Tevez. In the bigger games and away games in Europe, he has favoured a 4-3-3 with Rooney spearheading the attack. It is probable that this will be the line up this evening; but the personnel, Rooney aside, is anything but predictable as the manager has the most handsome complement to pick from that he has had all season. Louis van Gaal had spells at Ajax – where he was responsible for their famous mid 90’s youthful classy side featuring the likes of Davids, Kluivert, the De Boers and Overmars – and Barcelona, as well as a year in charge of the Netherlands national side and 4 years as the boss of AZ. Taking over as manager of Bayern last year, he had a terrible start, saved by an improbable win in Turin that scraped the Germans through to the knockout stages. Their form has recovered to see them currently in second place in the Bundesliga, although, with one eye on this tie perhaps, they suffered their first home defeat of the season at the weekend, having led. They usually line up 4-4-2 and have a formidable, experienced midfield.

First of all, that formation poser. Should Bayern stick with an adventurous 4-4-2 it would play into Ferguson’s hands. Bayern’s experienced two in the middle of the park are van Bommel and Tymoschuk – both combative players, and in van Bommel’s case, maybe a case of tired legs, with the veteran having played the full 90 minutes on Saturday. Clearly United have veterans of their own in Giggs and Scholes but with Ferguson using them wisely, particularly at this stage of the season, it is likely he will pick a central midfield that has plenty of energy.

When monitoring the wide areas it would be lazy and predictable, but also relevant, to mention the respective threats of Arjen Robben and Franck Ribery. Doubts persist about the fitness of both; both were subs at the weekend, though this could be just the same as our own resting of Ferdinand and Rooney. Ribery of course is probably the most sought after player in world football with most parties being aware of his probable availability in the summer, but his form earlier this season was considered so bad that he wasn’t even in the running for the Ballon D’or, finishing 28th, with United legend Ryan Giggs in 14th place. There is no doubting the Frenchman’s ability and as Sir Alex recently said, he rightfully belongs in that wide range of players behind Ronaldo, Messi and Rooney as someone who could possibly make that step. It will be a tough ask on either the veteran Neville or the inexperienced Rafael to deal with the winger, and will probably require the help of one of the midfielders or Valencia. Certainly, if Bayern start with Lahm on the left hand side, they have a solid threat down that flank and it will require all of the discipline United eventually showed in coping with Milan if the twice consecutive finalists have any hope of progressing this season.

Which brings us nicely onto United’s wide areas – Park’s recent form means he is surely a shoo-in but exactly where is another matter. Ryan Giggs played his way back into contention with a classy showing on Saturday and suddenly the shape of the 4-3-3 is uncertain. Giggs’ minutes on Saturday may resign him to a place on the bench tonight, which would probably given Nani a huge vote of confidence wide left, leaving Park to perform the spoiling role. Given Bayern’s options come higher up the park, this may result in a much deeper role for Park than usual.

In defence, United will likely have their 2007 title winning back line of Neville, Ferdinand, Vidic and Evra, at present the most formidable defence in the domestic league despite the horrendous luck with injuries. The way Ferdinand and Vidic have returned to form since being back in the side is phenonemal and a huge boost to our chances – that being said, the solid display from Evans at the Reebok against a stern physical test was re-assuring, too. Miroslav Klose, the two wingers, and Pranjic represent the prominent concern for the centre halves but given their experience, although it shouldn’t be expected to be comfortable, the task isn’t the most daunting. More than can be said for the Bayern defence – Lahm apart, Wayne Rooney must be licking his lips at the prospect of the big occasion. In van Buyten they have a hugely experienced defender but it is precisely this task Rooney relishes, and with a support line of the two best wingers – on current form (save, perhaps, for Malouda) in the Premier League – there must be great belief that the team can secure at least one away goal. That’s not to say that Bayern’s defence is particularly creaky – but given United’s ability to score plenty away from home this season, much will depend on whether van Gaal sticks 4-4-2 or reshuffles to try and contain the visitors. Even a 4-3-3 may prove insufficient, as Arsenal found out to their cost.

I’ll stop short of making a prediction for fear of looking a fool in 12 hours time, but one thing’s for sure, this isn’t the procession that the media will have you believe, and a score draw would by no means be a disaster. In the form United are in, however, there is no reason to expect them to settle for that – much will depend on the fitness of Bayern’s two wide men. If they fail to make it, Sir Alex should be supremely confident about his sides chances.