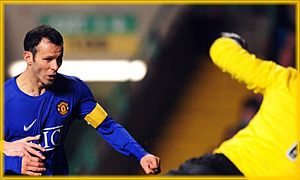 Manchester United left it late to earn a well deserved 1-1 draw in Glasgow against Scottish Champions Celtic at Celtic Park.

United had lost their previous encounter 1-0, having missed a penalty in the dying seconds of the game. However, although jubilant with the point that leaves the reds one point of qualification for the last sixteen – United really should have won this game after a spirited second half fightback.

United started brightly knocking the ball around with confidence and ease whilst be shadowed by a Celtic marker all over the pitch. United lined up in their usual 4-2-3-1 formation for away European games while Celtic started with 4-4-2 which eventually turned into a 4-5-1 as the game progressed.

United looked dangerous from corners with Celtic adopting zonal marking over man marking which allowed Rio Ferdinand to get a shot in. However, it was Celtic who took the lead with a superb goal through Scott McDonald. United had given away a freekick which wasn’t cleared and the ball dropped to McDonald on the edge of the area before the Australian lobbed Ben Foster with a deft right foot touch – a glorious goal that erupted Celtic Park.

United weren’t ruffled and continued to press and dominate possession but rarely threatened the Celtic goalkeeper. Ronaldo was drifting infield and produced a number of quality flicks and turns to open up space for himself or a team mate. Nani and Tevez weren’t as involved as Ferguson would have liked them to be and Nani was withdrawn at half time. The young Brazilian defender, Rafael Da Silva, had a torrid time defending – however going forward was a different matter and the young full back whipped in a couple of fine crosses.

The second half left Ben Foster a spectator as United piled forward to try and find that goal that would leave them with a point of the next round. Berbatov was on for Nani and United opened up Celtic a number of times on the right hand side with Ronaldo, O’Shea and Tevez getting in behind. Ronaldo was becoming increasingly more influential as the game went on and would usually cut inside to try and create something.

Berbatov should have scored after a John O’shea header at the back post wasn’t cleared and it fell to the Bulgarian. Wayne Rooney replaced Carlos Tevez who was clearly unimpressed with the decision. However, it was Rooney that tested Boruc’s athleticism when he drilled a low hard shot to the right of the Celtic keeper – which earned United another corner. The pressure was growing and growing and you felt it was only a matter of time before it came.

Ryan Giggs scored in the 84th minute after Boruc could only parry a dipping shot from Ronaldo. It was Giggs’ first Champions League goal of the season and it couldn’t have come at a better time. United felt that there was still time to get all three points out of the game and in the dying seconds of the game they nearly got it. Berbatov scuffed a shot, headed back in by Ronaldo, wide of the post as the Bulgarian found himself unmarked in the area. It would have sent the Red’s through to the next round, however the £30 Million man couldn’t quite adjust his body quick enough.

The game ended 1-1 with United completely dominating the game and will be disappointed with the chances missed. Celtic defended deep and did well against United for long period’s of the game, but sustaining that type of play is extremely difficult against the movement and creative guile of the European Champions.