The 2018 FIFA World Cup Qualifiers are nearing the end. We will have the final pool of 32 teams competing in the tournament during November, but several teams have already clinched their berths for the tournament.

Several countries involving Manchester United players have either qualified, or are on the verge of doing so. Here is the full list:

Nemanja Matic played a pivotal role in Serbia’s impressive campaign during the UEFA World Cup Qualifiers. The holding midfielder featured in seven of the team’s 10 games, and even contributed with a goal during the 2-3 loss against Austria this past Friday.

Matic has got off to an impressive start for Manchester United, and quickly settled as a starter for Jose Mourinho. As such, it is safe to say he will be part of the squad playing on Russian soil next year.

David De Gea is considered as one of the best goalkeepers in the world. And Manchester United’s star shot-stopper was at his best during Spain’s World Cup qualifying campaign. De Gea featured in nine matches for La Furia Roja, and his numbers were impressive.

De Gea only allowed three goals in nine matches for the 2010 World Cup champions. Barring an injury, he will start for Spain on Russia. There are no doubts about it, as he is one of the team’s most important players and one of their leaders defensively.

Paul Pogba and Anthony Martial were not on the French squad for the final two qualifying matches. But they are reportedly on Didier Deschamps’ radar for the upcoming challenges. But it is not a secret that Pogba has a bigger chance to play on Russian soil next year.

The box-to-box midfielder featured in seven matches for France, and the reason why he missed the final two games was due to injury. He netted two goals in those seven matches, and he should start for Les Bleus as long as he is healthy next year. Martial’s case is a bit more complicated, since he has not been able to secure a regular starter role for United, and there is a lot of competition on France for a spot on the final squad.

Martial will likely compete with Antoine Griezmann, Thomas Lemar, Ousmane Dembele, Kylian Mbappe, Olivier Giroud, Kevin Gameiro, Dmitri Payet, Alexandre Lacazette and Kingsley Coman for a spot on the final roster. It will be quite complicated for Martial to make it as long as he enjoys a breakout season for United.

Argentina were out of the World Cup after conceding an early goal against Ecuador in the final match. But a hat-trick from Lionel Messi saved La Albiceleste, and Jorge Sampaoli’s men qualified for the World Cup on dramatic fashion.

Sergio Romero was the team’s clear number one choice throughout the entire qualifying campaign. The former AZ Alkmaar goalkeeper started 17 out of possible 18 matches. And similar to Pogba or De Gea, he will start and play a key role for his country barring an unexpected injury during the remaining of the season.

Belgium were one the best teams in the UEFA World Cup Qualifiers, and had no problems to clinch a berth in the tournament. In fact, Roberto Martinez’s men were the first European side to secure a berth in Russia’s tournament next year. And both Romelu Lukaku and Marouane Fellaini played big roles on the team.

Lukaku was the team’s top scorer with 11 goals in eight matches, and in fact he was one of the most prolific forwards in the entire Qualifiers. He further proved he is one of the top forwards in the world right now, and most of Belgium’s chances to make a deep run in the competition will be on his shoulders.

Fellaini did not have a role as big as Lukaku’s one, but he still featured on a regular basis for Martinez even if he missed the last game against Cyprus due to an injury. Fellaini ended playing in six out of the team’s 10 matches, and considering his tactical versatility, it is safe to expect him as part of the 23-man squad for Russia next year as long as he is healthy.

As one would expect, England are likely to have several Manchester United players representing The Three Lions in the World Cup. Gareth Southgate’s men won Group F with 26 points, and there were four players among the squad for the final two games. Jesse Lingard, Phil Jones, Chris Smalling and Marcus Rashford got call-ups.

All four players should be in contention for a spot in the final roster, but they might not be the only one. Ashley Young and Luke Shaw could become alternatives for the left-back role, although much of that will depend on how they perform during the season. Young has looked impressive so far, and he should get a chance to get back to the National Team sooner than later.

Lingard and Smalling have mostly come off the bench during the Qualifiers, and their role should not change in the foreseeable future. Jones will likely battle with Gary Cahill and John Stones for a centre-back spot as long as he is healthy. And Rashford has settled as a starter of late. If the youngster continues to progress, then he is likely to become a starter in an attacking line that could also feature Dele Alli and Harry Kane.

Sweden held on in their final match against the Netherlands, and they secured a playoff berth. Their opponent is yet to be announced, but Sweden will have two matches to prove they belong in the 2018 World Cup.

Victor Lindelöf played in nine matches for the Scandinavian side and contributed with a goal. He has not looked impressive for Manchester United so far, but he is a key member of the National Team. And will play an important role on the team’s defensive line.

Similar to Sweden, Italy also secured a playoff berth after finishing second in the group behind Spain. But Gli Azzurri are one of the top teams during the stage, and they certainly appear as favourites to clinch another World Cup berth.

Matteo Darmian has played a key role for the Italian side, and that is not likely to change. Despite struggling to secure a starting spot for Manchester United this season, the former Torino full-back started five games in the qualifying campaign – including the last four. If we take Darmian’s recent call-ups as reference, then it is safe to say that he will once again feature for the Italian side during the playoff run.

Eric Bailly has been one of the leaders for Ivory Coast during the World Cup campaign. And the former Villarreal defender will play a key role on the team for the final matches of the African qualifying run that will come in November.

Ivory Coast have one game left on their schedule. They will visit Morocco on November 6, and have no margin for error. They need to win to punch their ticket to Russia. Any other result would eliminate them. 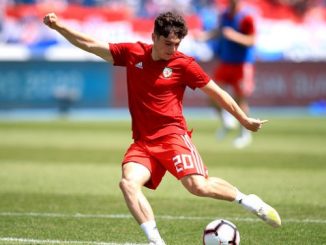