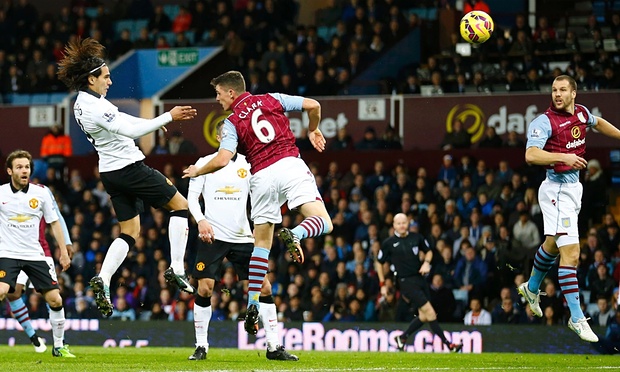 Falcao scores in the 1-1 draw with Aston Villa last season.

Manchester United look to continue their winning start to the season as they travel to Aston Villa. The home side are also buoyant after beating newly promoted Bournemouth on the opening day. All the talk before the game will be whether David De Gea will remain at Manchester United following the revelation from Louis van Gaal the goalkeeper is “not eager to play”. The Spaniard’s future is uncertain following interest from Real Madrid all summer and with his contract up next summer, United could look to cash in – if the price is right. Romero, who started last weekend against Tottenham, will replace De Gea tonight in goal. Marouane Fellaini is still serving a suspension following his sending off against Hull City at the end of last season whilst Phil Jones is still out injured.

United picked up four points against Aston Villa last season, drawing 1-1 at Villa Park and then beating Villa 3-1 at Old Trafford in the return fixture. Can United improve their performance from the opening fixture against Spurs OR will United’s slow start continue?

We have a superb view from the opposition with Damian Dugdale, who blogs over at The Villa Blog. We caught up over Jack Grealish, the sale of Benteke and of course, ex-Manchester United and Aston Villa defender Paul McGrath. You can follow Damian and the lads on Twitter @avfcblog.

1) Villa got off to a great start on Saturday. How do you think your season will pan out?
Other than not winning the league or finishing in the top four, I don’t know and not many people can have an opinion that would carry much weight about us this season. The truth is it’s Tim Sherwood’s first full season as a Premier League manager and he’s in the middle of his first transfer window. I think we’ll do better than last season, if that is a good enough answer.

2) What have you made of your transfers into the club over the summer?
There have been a few and I’ve only seen some of them once. Micah Richards holds some promise as does Rudy Gestede and him scoring at the weekend has inspired a few. As for the others, time will tell and I think they need to get 10 to 15 games under their belt before we even think about passing judgement. But I’m sure, if they work together and the manager can communicate his desires, we’ll be okay. Not sure yet if we have any world beaters, but there is every chance we’ve unearthed a star.

3) Christian Benteke was a big player for you. If you had the choice (obviously Liverpool met the release clause), would you have accepted the fee or kept the player How do you think he will perform?
He was a big player and there isn’t an Aston Villa that didn’t love him, but there isn’t an Aston Villa fan that thought we’d get £32.5m for him. I think hand on heart, I’d say happy to have had the money, but I’d have been happier for the player had he gone to a proper top four side. He’s taken a step up yes, but it’s also a sideways step joining Liverpool. We were not going to win the league or get Champions League and neither are they.

Chances are he would have had another good season with us and then he’d have been able to pick his Champions League club. Going to Liverpool means he’s wasting time. If he has a good season, he’ll pick his club, but if the club don’t and they probably won’t, he’s stuck fighting for Europa League place. Not what a player of his calibre should be doing.

4) Out of the top four from last season, who has strengthened the most in your eyes and who will be the victor come May?
You guys have strengthened the most, I think that’s clear for the world to see but I’m not sure it’s enough to win it for you and I think some of the new players either have something to prove and the Premier League is a different beast to other leagues. I think with van Gaal you’ve got someone that can structure a team to play a certain way and that in itself will win you a lot of matches, but I think to win the Premier League you need to have players that have the freedom to do that something special and I’m not so sure van Gaal will allow that or if you actually have that player. If I had to pick a team today to be victor in May, it would have to be Chelsea.

5) Jack Grealish came under fire for what appeared to be him out cold on the floor on a lads holiday. What did you make of the incident and how good a player can he become?
We’ve all had one or two too many and ended up like Jack Grealish and many of us more than once. The thing is, for most of us, it happened when everyone didn’t have a cell phone. I’ve got no problem with it as long as it doesn’t happen too often. As for the player he can become, only time will tell but he’s got something special about him.

6) If you could take one player from United into the Villa team, who would it be and why?
Let’s be realistic and write off the obvious because they wouldn’t come to us. But Ashley Young might. If you brought in someone to replace him and he was told that he’d be a squad player more than likely starting on the bench and you’d accept offers for him, there is a chance he’d come back. He was great for us and we gave him a platform to get into the England side. He’d start every game for us as Captain and he could lead. He’d be the big fish in the small pond and he would shine. But he played well yesterday and I suspect he wont be leaving.

7) If you were in the United hot seat and had the choice of selling David De Gea to Real Madrid for a cut down price or keep an unhappy player at the club for one more season and then lose him on a free – what would you do?
You’ve got to sell, it’s just the modern day game and why it’s broken. But you can also keep him and let him rot in the reserves. It’s not as if you really need the money. But it’s the smart thing to do. If his heart isn’t in it you might as well get what you can.

8) Who is your favourite Villa player of all time and who is generally considered to be the best player of all time?
My favourite player was Alan McInally, basically because I was about twelve or thirteen years old when he signed for us and he’s the first player I really remember just wanting to be in the playground. I met him at the FA Cup final last season and it was awesome. As for the best player of all time; you’ll get a few names from different people but the likes of Paul McGrath, Gordon Cowans and Brian Little will be mentioned. It’s too hard to say and I don’t feel I have the right to name one.

9) What do you think of Louis van Gaal as a coach? Do you think he will win a trophy at United?
I think he can win silverware and anyone that says different is a mad man. But my general impression is that he’s going to be too strict for the Premier League. I think in Spain or Italy you can win that way, but here you need something else. He’s like the headmaster of an all boys boarding school that still have the cane and he’s the man that dishes it out. And I think he actually enjoys it too.

10) What is your prediction for the match?
I will never predict a defeat for Aston Villa and I think we’re the type of match that Manchester United will slip up on. Sherwood is still, to some extent and unknown quantity and there are very few people in football that can talk about our players. You’ll come prepared and you’ll play your way but you’re not going to know our way. We can draw this match but there is also a chance we can win. My prediction is we don’t lose.