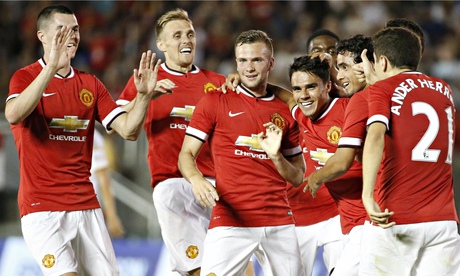 Given how tour has panned out for the trio of young defenders – Blackett, Keane and James – it felt necessary to provide a little bit of background and context as to how they each took differing paths to their current position in the first team squad.

More commonly found at left back, Blackett’s inclusion on tour was slightly surprising. Not because of a lack of talent but rather how the last 18-24 months have panned out for him.

Having been part of the 2010/11 FA Youth Cup winning squad – often playing ahead of the inconsistent McGinty and injured Fryers at left back – he continued to excel in the U18s in the following season, culminating with a place in the first team squad for the 2012 summer tour. Tall and athletic but lacking in some maturity, particularly defensively, Blackett continued to show promise that had seen him rewarded with England call-ups at almost every youth level. However, that summer tour kick-started two years of tough learning rather than continuing the upward trajectory that he’d been on.

The 2012/13 season proved to be tough as few opportunities in the Reserves came his way. When he played it was sometimes as a left winger and occasionally as a centre back but the lack of regular football meant there was little opportunity to continue his progression and his performances were both brief and inconsistent. He could have been forgiven for being in the doldrums given how the season panned out.

Warren Joyce offered Blackett a few more U21 opportunities in the 2013/14 season but the club felt his development was best suited with a loan move and so in November he joined Blackpool for what turned out to be a 2 month period. He made just 5 appearances in that time, playing at left back and generally doing little to impress. At the end of January he joined Birmingham City for three months but again struggled to play regularly, making just 8 appearances and again failing to impress the fans there. He was however praised by Lee Clark for his willingness to learn and attitude in training. After two excellent years in the U18s, Blackett’s career seemed to have stalled.

His inclusion in the tour squad was therefore somewhat surprising. If he was covering the left side then it was surprising he’d been picked ahead of the versatile Vermijl and if he was covering centre back then it seemed bizarre that Thorpe hadn’t been selected first. When it became clear that van Gaal wants to use Blackett as one of three centre backs his inclusion made a bit more sense – if there’s one thing Blackett has over Thorpe it’s pace and that appears a vital attribute for our defenders.

His performances have been impressive. He’s always been quick, strong and good at bringing the ball out of defence because of his time at left back but there are signs of maturity and focus, something he’s lacked in the past. Although his loan spells were unsuccessful in terms of performances he has clearly grown up as a player. Unquestionably he’s been one of the biggest surprises on tour, slotting in so comfortably as the left sided centre back. Judging how close he might be to the first team for the coming season is tricky. Before tour he’d not have been close but after a few weeks in America he’s done himself no harm at all. If Van Gaal manages to bring in one or two more centre backs then it could be that it’s another loan spell but that he could also cover the left wing back area will go in his favour.

If Blackett is proof that performances in loan spells aren’t the be all and end all then Michael Keane makes a convincing argument that they are.

Originally a right back and the perceived weak link in the 2011 FA Youth Cup winning side, he made rapid progress the following season after a significant growth spurt and a move to centre back. His time at right back ensured he was more than comfortable on the ball and with a new found confidence both in the air and challenging for the ball on the group thanks to his physicality, he went on to win the 2011/12 Reserve Player of the Year award. That season also saw him make his first team debut, coming off the bench away to Aldershot.

He followed up the 2011/12 season success the following campaign with a first start for United before a loan move to Leicester City. A regular at centre back, he helped them reach the playoff semi-finals and his performances didn’t go unnoticed as he was rewarded with his England U21 debut. He also made a shortlist of three for Leicester’s player of the year.

Under David Moyes there were no first team opportunities for Keane but he had a couple of two month loan spells at Derby and Blackburn – the latter particularly impressive and upon returning to United in May he was named on the bench by Ryan Giggs for a Premier League game against Hull. Keane is held in very high regard by the club and has been praised on numerous occasions by first team players.

Blackett’s performances on tour have been better than Keane’s which makes it tricky to judge where the pair are in terms of the first team. Prior to the last few weeks there would have been no doubt about which player was closer. Keane’s performances on tour have still not been bad, he’s looked more than capable alongside the other first team players and given how highly he’s thought of and how well he’s done in recent years, he has a strong chance of keeping a place in the squad come September.

Of the three players his inclusion on tour was maybe the most surprising but also proof that on the whole, good performances will be rewarded at United.

The younger brother of former United player Matty James, Reece joined two years ago after impressing on trial. Aged 18 he’d been strangely released by Preston North End and United decided to give him an opportunity. In the 2012/13 season he was seldom used by Warren Joyce and his small stature didn’t help with the fact he appeared a bit timid on the pitch. As the season went by he gradually took advantage of injuries and finished the campaign in the side.

He joined Carlisle on loan in the summer of 2013 but after just two appearances he returned to United due to injury. He stayed at United for the remainder of the season and became a crucial player for the U21s, playing more minutes than any other player. Although mainly used at left back he showed his versatility by playing left wing and a holding central midfield role too. Surprisingly for a fullback he didn’t claim any assists but his performances were incredibly consistent, never lower than a 7/10 if a rating system had been used. He balanced defence with attack perfectly, never shirking from his responsibilities as a defender but still managing to use the ball as well as a midfielder. By mid-season, Warren Joyce had handed him the captaincy and he was unlucky to lose out in a fan vote to Saidy Janko for the Reserve Player of the Year award – Janko almost certainly winning it on the basis that his name was more familiar to fans than James’.

Despite performing so well over the 2013/14 season, with little exposure to league football it was hard to know how he’d fair stepping up a level, not least because he’s so small. As such, his inclusion on tour was a surprise – in fact he was a late addition to the touring squad and not in the list originally drafted. His performance against LA Galaxy will be remembered for his goals – amusing given that he’d not scored for 8 years! He then started against Roma and did fine before picking up a small injury. One suspects that another loan spell will come his way this season, particularly given Ashley Young’s form in the wingback role. It’ll keep him on course with what was probably expected after he did so well last season.

Plenty of United fans would have never known about Reece James at the start of July but now it’s the minority who don’t know him. Few foresaw Tyler Blackett impressing to this extent but he’s shown impressive mental strength to reach a point where he’s seriously being considered for the first team after a couple of disappointing years. That Blackett may be out-performing Michael Keane does not mean that he is necessarily more ready – Keane’s development and performances in recent seasons make him the obvious candidate (along with Lingard) to step up to the first team full time. The three players have taken very different routes to reach this current point in their careers and with all three on the cusp of the first team, it goes to show that that sometimes, all a young player need is an opportunity and some encouragement.

Hopefully Van Gaal is pleasantly surprised by the quality of our younger players. There are others who are unlucky not to be on tour but with a bit of luck he’ll take an interest in them at some point over the next couple of years. All this tour has done is reinforce his belief that trusting young players is never a bad thing and that age is sometimes irrelevant. It’s a good outlook for him to have at a club with such a strong history and tradition of producing its own players; long may our young players continue to get opportunities to uphold the club’s values.