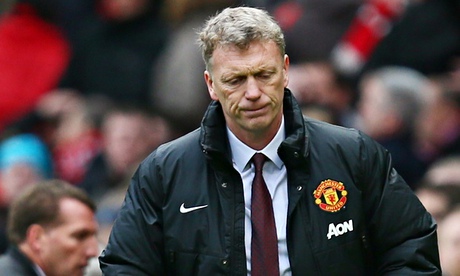 David Moyes has been sacked as manager of Manchester United following an awful season.

This morning Manchester United confirmed the departure of David Moyes. We reflect on that news, the man and what might happen going forwards with two short blogs rolled into one…

Football supporters on social media, those highly-charged and impassioned individuals who by their nature tread precariously close to the precipice of their own sanities, have a peculiar love for taking sides. Abstraction in the form of the wider picture is rarely contemplated, because time is of the essence in an environment that is becoming psychopathically obsessed with the speedy delivery of sentiment. The rapidity of Manchester United’s descent into such a noose-craving mediocrity has brought with it all forms of sorry sorrows, but it hasn’t been without intrigue. Remove your head from your hands for a rare moment and you’ll spy all sorts of sinisterly and interesting human behaviours. Given the nature of the cruel beast, David Moyes was always destined to be the first domino to be toppled when the situation, as it did some months ago, became categorically irreparable. While the vast majority of the supporters home and away admirably tried to rally him and his shambling troops, United have throughout the season never stopped looking like a car being driven by a blind man with his feet. Each random moment of steadiness was soon obliterated by another crash. But to reduce such a degeneration to mere managerial negligence seems at best to be extremely naive. Tactical incompetency may inspire wrath and dispirit amongst players and the support, but should it be an acceptable reason for a lack of collective effort? Moyes’ enduring moroseness and failure to embrace for one minute United’s philosophy has justifiably signalled a death knell, but there lurks many other issues too. For United to really improve, the conveyor belt he’ll leave on will need to be a busy one.

Removing Moyes from the seat that scorched him is in United’s interests, but the decision carries with it a considerable danger. The sobering rise of player power within the game has ensured that the egotists in the dressing room carry with them an attitude that the most severe punishment for prolonged inadequacy is a managerial casualty. We all seem to have swallowed this reality with little more than a groan, but on further inspection it’s difficult not to grimace when you think hard about it. David Moyes may not have known quite how to handle such a enormous task, but supporters would do well to remember that, save for a very select few, the vast majority of United’s players willingly chose to operate under the delusion that they were playing for a manager, not the club we all adore. Whoever now takes the helm will find their job a no less taxing one than what Moyes chose to take on a mere 10 months ago. The new manager may not encounter the same bloodcurdling anxiety, but the task at hand remains a distinctly gargantuan one. It will involve much shooing and shoving out of the old guard and the inept, and the unenviable task of constructing something great out of limited funds. The most intriguing aspect of the whole affair, however, is observing how supporters have reacted to it. There appears to be some unspoken agreement that when it comes to something controversial, entrenching yourself in a “pro” or “anti” group is a prerequisite in becoming a proper spectator. Unless you’re a staunch pro- or anti-, you may as well entirely remove yourself from the debate. Ignoring for one minute the sheer lunacy of such a proposition, it’s clear that such outright division brings with it a danger, too. Blind support for a manager is at best naive and at worst unforgivably dumb. Those who back a manager blindly may do so with their best intentions, but in doing so they contribute to their own disillusionment with what they are witnessing on the field. Nothing is ever likely to get better unless it’s subjected to rational and fair criticism. Similarly, total opposition is a precarious assault too, as it tends to ignore the multitude of factors that can contribute to a decline. Those who have crudely imagined Moyes’ head being led away on a stick, all the while attributing to him all blame for this hellish spell, are guilty of grabbing at what is only in front of them. They have failed to see that what most inspires their disdain is merely a symptom of something larger, something in which many are lamentably complicit, something which many more shockingly choose to ignore: the club’s poisonous ownership, and how it – far more than David Moyes – has brought this new hell. The removal of the Scot was logical for reasons that are obvious, but the glee with which it was met once more brought into view the primary concern of most supporters: glory and the pursuit of it. Such a yearning is a natural and understandable one, particularly given the anguishing destination of this year’s title, but it’s difficult to not see a managerial change at United as something greater than a bandage over a shattered bone. The heart of the football supporter swoons as a result of the witnessed aesthetic, but what happens before our eyes is largely a result of what is done out of our line of vision. United’s maneuverability has unquestionably been compromised since that dark day in 2005 when the Glazer family, with pathetically scant opposition, placed its pincers around the club’s throat. In the 9 years since then United, unaided by any outside financial aid, have achieved success but something rotten still lies at its core. The sacking of David Moyes may appear on the surface as a cleansing move, but it does not free the club of its most hamstringing influence. A truth that cannot be forgotten.

And so nearly a year after I knew the identity of the second manager in charge of the club I adore in my supporting lifetime, I now await the identity of the third man. I couldn’t have been more wrong about David Moyes and Man United – although I’m not alone in that respect. A drop-off was to be expected but to fall this hard? Few can claim to have foreseen this. The upcoming summer was always going to be important for the short and long term future of the club but even more so now. For the second pre-season running, all eyes will be firmly fixed on United.

Despite United being held aloft as supposedly being all that’s great about faith and longevity, the board have been left with no decision but to remove him from the club. One might argue that in the end, he got more time and patience than he should have done. There is absolutely no doubt that as tempting as it might have been to push on with the plans for the summer that have been worked upon with Moyes for months now, that this is indeed the sensible decision.

There have been so many articles and blogs written now about what’s been going wrong and why he’s the wrong man that it doesn’t bear repeating most of them. However, to pick on one thing in particular, this turned out to be an almighty clash of philosophy and style that neither party could budge on. Moyes has his ways of talking, of playing, of reacting and they are simply not in line with the expectations at United manager, by the players or the fans. He doesn’t carry the aura or authority that we assume the manager at United should. That extends to his tactics and team selections, often overly cautious and lacking in cohesion or style – too often going into a game set up as the underdog.

There is something sad in the rejoicing though. It shouldn’t be personal with Moyes, he simply isn’t right or good enough. Fans that have met him, particularly on away trips, have had nothing but positive things to say about him as a person, by all accounts he is more than a nice man. Yet, he has become a target for ridicule. Online it’s become a season-long competition about who can be ‘most right’ about him. Every day the same arguments and discussions have taken place between the same people. Some who’d dare not question Ferguson have been telling Moyes how to do his job. Amongst it all, there has been a strange belittling of the job he did at Everton – a rewriting of history almost in some quarters. Some people may find it strange but he has my sympathy. I don’t believe he’s this bad a manager and it wouldn’t be surprising if he succeeded elsewhere, albeit at a smaller club with lesser expectations. Whilst it’s his job to manage, motivate and improve the players, he’s also been let down by a good few of them – seasoned professionals who’ve seriously underperformed.

What happens next is vital. United cannot afford to be left behind this summer. Transfer targets have been identified and already worked on for weeks and months. Do the club push on with them or wait for the new manager to assess the squad and list his own preferred potential signings? Standing still simply isn’t an option and Ed Woodward must step up now to help the new manager in that respect. The job is bigger today than it was 12 months ago with even less margin for error.

For the existing players and staff it’s a nervous period. Those who’ve so publicly underperformed this season may not get a second chance; younger players who might have had their eye on the first team next season may simply be too much of a gamble now for a new manager. Whilst there’s an obvious benefit and romance to keeping on Phil Neville for example, a former player who should get the club; he appears to have fallen victim to Moyesification in interviews. There’ll be decisions that have to be made about him, Lumsden and Round – less so Woods.

The immediate future will be intriguing. This isn’t a bad squad but it arguably isn’t a balanced squad. There are too many wide players and number 10s – finding a system to suit both seems impossible. Then there are the undroppables, players who have been allowed to become too influential with inflated egos. Chances are they will remain even with a new manager. Supposedly there’s a lot of money to spend on strengthening the squad but that money won’t be available every year. Both the short and long term future of the club hangs in the balance now. Make no mistake about it, sacking Moyes won’t fix everything, he isn’t/wasn’t our only issue but, despite what I thought about him a year ago, or even a few months ago, this is a big step towards repairing some of the damage of the last year.