Some of us were a little hungover from enjoying too much of the festivities from the night before, but Boxing Day served up a right Christmas cracker with Manchester United coming from two goals down to beat Hull City 3-2. Hull will no doubt be extremely disappointed to not have come away with a point after squandering a number of late chances and of course, having had a two goal lead inside fifteen minutes.

A stunning Wayne Rooney half volley was the pick of the goals, whilst United’s number ten was also involved in setting up Chris Smalling’s towering header and putting pressure on United old boy James Chester, who headed into his own net.

Here we discuss the talking points of a thrilling game and welcome comments from both sets of fans. Apologies for the late posting of this blog, overindulging at Christmas takes its toll!

Awful defending sees United two down inside fifteen
Despite the fact that Rio Ferdinand has, this season, started to look his age – you would have forgiven many reds who were crying out for Vidic and Ferdinand after the second goal flew past David De Gea off the foot of Jonny Evans. United were a shambles at the back for the first twenty minutes, and it was only until Rafael picked up a groin injury that forced Antonio Valencia to right back and Adnan Januzaj to right wing, did United start to look an attacking threat.

The first goal, although television replays quite clearly show the right wing back Ahmed Elmohamady smashing the ball out of play, came from a corner – with Alex Bruce, who had a fine game throughout, towering above Patrice Evra to nod the ball back into the path of James Chester, who had lost his marker Wayne Rooney. Hull City couldn’t believe their fortunes when David Meyler, who had about three opportunities to score, bundled the ball over the line with a deflected shot off Evans. The United back line looked all at sea, which is surprising considering the composure both Evans and Smalling demonstrate when in possession of the football and also, without it.

As the game wore on United seems far more comfortable on the ball, despite the heavy pressing of Hull City. Evans was able on numerous occasions to steal in and win the ball off of Graham or Sagbo and start a counter attacking move. Evans was unlucky not to get on the end of a superb cross from Ashley Young in the second half, having started the play, whilst Smalling scored an excellent header from Wayne Rooney’s exquisite cross. It was this goal that got United back into the game and the fightback began, but those twenty odd minutes before the goal saw Hull City dominate proceedings

Wayne Rooney: Goals, assists and playing deeper
Wayne Rooney’s fabulous strike was quite possibly one of the goals of the season. His right footed shot flew past McGregor to get United back on level terms, which again reiterates his importance to this United side, especially in the absence of Robin van Persie. Rooney is closing in on Denis Law’s 237 goals for the club, although that target will surely not be beaten in this campaign (Rooney is currently on 211 in all competitions). His goal was in fact his 150th league goal for the club and he is now only eight behind Joe Spence (in terms of league goals).

It was Rooney’s excellent delivery into the box from a freekick on the right hand touchline that allowed Chris Smalling to nod home and get United back in the game having been two goals down. He also played a big part in the winner, after helping to get the ball out wide to Ashley Young, who put in some exceptional balls all afternoon, before the cross came in for Chester to head in under pressure from United’s number ten. Although Rooney’s brilliance was there for all to see with his strike, he was lucky not to pick up a yellow card for a wild kick at Tom Huddlestone.

Many have questioned where Wayne Rooney operates best, but he surely causes more damage operating from a deeper position as he did yesterday. These two diagrams from FourFourTwo statszone, highlights his influence on the ball when as the main front man (against Spurs away) and playing in the hole (against Hull City):

Against Spurs away (United drew 2-2 with Rooney scoring both): 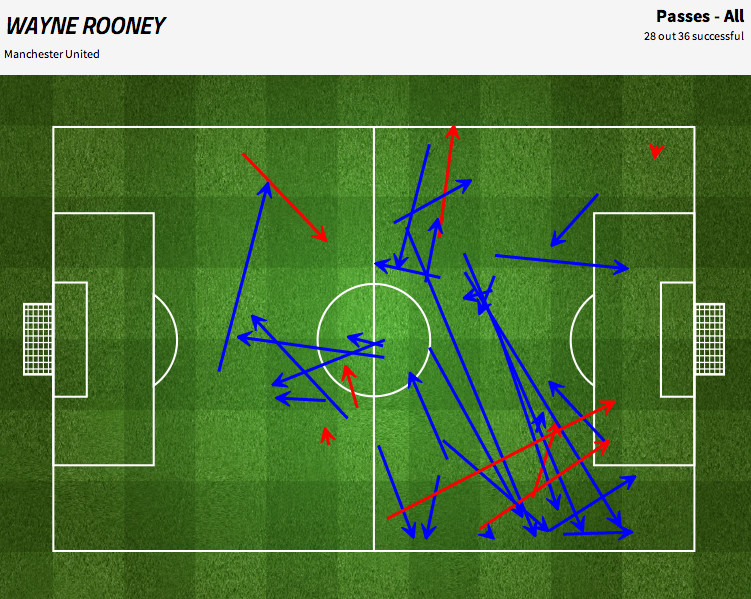 Against Hull City away (United won 3-2 with Rooney scoring once and assisting another): 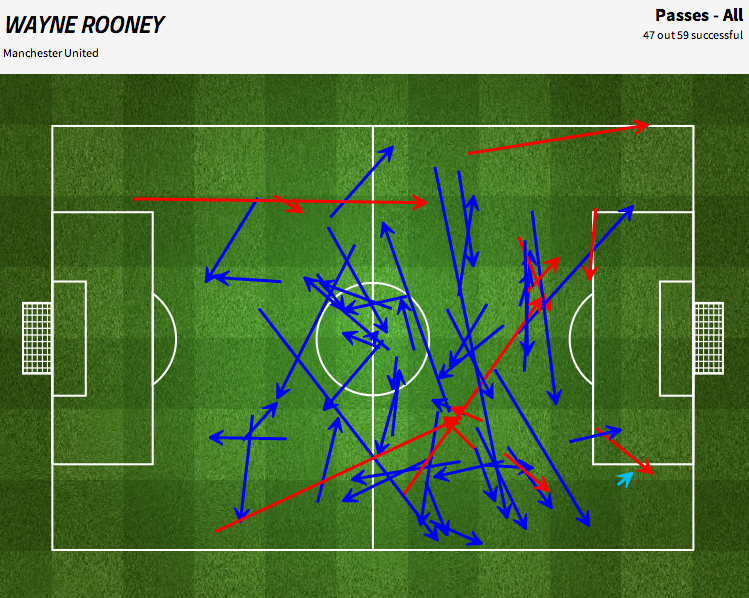 Adnan Januzaj:A talent that must learn from Ronaldo
Adnan Januzaj is definitely the most exciting youngster to pull on a shirt since the summer of 2003 when Cristiano Ronaldo lineup against Bolton Wanderers. That afternoon saw one of the most breathtaking substitute appearances from a young lad of 18 with an abundance of talent. Everyone leaving the ground that day knew they’d witnessed something special and many even thought that he would one day be the best in the world.

Over the next four years, Ronaldo received an abundance of praise and an equal amount of heavy criticism for his diving, showboating and lack of end product. Ruud van Nistelrooy even fell out with the player over his hesitance to deliver the ball at the right moment. However, over time Ronaldo developed both physically and mentality to be able to take the kicks and continue to want the ball, be brave.

Yesterday, Adnan Januzaj went to ground too often as he was anticipating a foul. David Moyes ever roared at the youngster to get on his feet and get on with the game. There is no doubt Januzaj is targeted due to his slight frame and exceptional balance to weave in and out of players, but he will no doubt be looking to remove this from his game. His goal against West Ham was fantastic and as soon as he was introduced he won a free kick that led to the opening goal for United. He has such a bright future in the game, but must be cleverer when looking to draw a foul, otherwise decision will go against him.

Match Conclusion
David Moyes will be delighted in the manner that United fought back, reminiscent of the 3-2 victory over Aston Villa last season or even the 3-2 win over Blackpool in 2010/11. United were all over the place for the first fifteen minutes, but full credit must go to Steve Bruce’s side for their high pressing game, which forced United to hit long balls and be extremely quiet in the attacking third.

When Hull City scored their second goal, United had only managed twenty five passes in the attacking third with nine going astray and five being long balls. The following fifteen minutes saw United ramp up their attacking play with thirty seven passes in the Hull’s half and the longer balls limited. This highlights the fact that both Smalling and Evans settled and were far more comfortable on the ball and the introduction of Januzaj stretched Figueroa as Valencia moved to right back and was a real attacking threat. Ashley Young also got joy out of the wing back, who was eventually substituted, in the second half – setting up the winner as James Chester headed into his own net.

Hull nearly equalised at the end of the game when Chester found himself in a one on one with David De Gea following an excellent through ball by substitute Boyd. The former United defender just had to slip it past the Spaniard, however – United’s number one was off his line to close down Chester and put the ball out for a corner. De Gea had nearly be caught out following a cross, which he fumbled, but again showed how vital he is to the side with an excellent stop right at the end. He also demonstrated an extremely strong punch through the match, stopping Sagbo early in the second half.

From United’s perspective, it is a massive boost to have Darren Fletcher back in the starting lineup. Fletcher hadn’t started a game for United since the 4-3 victory over Reading last season due to illness. Fletcher’s usual game of high pressing and closing down of the opposition may take some time to return, but he put in a great shift alongside Tom Cleverley in United’s midfield. Michael Carrick’s return from injury is also a welcome addition, having missed the last two months.

Although United had the majority of possession, Hull City will be disappointed to not have obtained at least a point from the match. Bruce has done an excellent job so far and with performances like this will surely see Hull avoid any sort of relegation dog fight. It was only last month Hull won handsomely against Liverpool and there will surely be a few more scalps at the KC Stadium this season.

United now travel to Norwich on Saturday afternoon for the final game of 2013.