Manchester United, the newly crowned champions, travel to Arsenal on Sunday as the season draws to a close. Arsenal still have a lot to play for in order to qualify for the Champions League next season, desperate to get one over United, who return victorious with their former captain – Robin van Persie.

Last season, United ran out 2-1 winners with goals from Antonio Valencia and a late strike by Danny Welbeck. United’s top scorer, then at Arsenal, scored in between – but it concluded a double over the North London side, who had been humbled at Old Trafford in the previous August. United beat Arsenal 2-1 at Old Trafford earlier this campaign, with van Persie getting on the scoresheet inside the first few minutes. We welcome comments and predictions from both sets of fans.

As usual, we’ve got an excellent View from the opposition with Mark Gilbert, a season ticket holder at The Emirates. You can follow Mark on Twitter @Gilberto82. We discuss Dennis Bergkamp, Robin van Persie and whether Arsenal will qualify for the Champions League next season:

1) How would you sum up Arsenal’s season?

Bitty. We started the campaign with two goalless draws but then beat Liverpool & walloped Southampton. We then suffered back-to-back league defeats against Chelsea & Norwich. Some of the games have been thrilling – the 7-5 win over Reading in the Capital One Cup & the 5-2 over Spurs in the league…but too often, our defensive displays have been shocking. We absolutely must tighten up at the back next term & that should mean a new keeper, centre-half & right-back coming in. Sagna, at times, has not looked interested this season.

2) Is Arsene Wenger the right man to lead you next season?

Yes. I think most fans are frustrated by the board more than Wenger. It would be good to know whether we want to challenge for trophies or whether top four is the overall aim. Many supporters would accept a short-term ambition of just finishing in the top four bearing in mind the financial constraints on the club. However, longer-term, the club must show its ambition – especially considering the cost of going to the Emirates.

3) Will you qualify for the Champions League next season?

I think the fact Chelsea still have to play Spurs does us a huge favour. One or both will drop points leaving an opening for us to take advantage of. I’m confident we’ll finish in the top four.

Absolutely. It’s been a poor league compared with many previous campaigns but United have been the most consistent & have used their squad most effectively. Robin van Persie has been terrific & proves what an absolute snip signing him for £24million was.

5) What are your thoughts on Robin van Persie’s return?

He could have left in a more classy manner – criticising the club that made him & jibes at Wenger were not needed. But ultimately, he made the right decision for his career.

6) How do you think Wenger will line up on Sunday and what is your prediction?

7) Other than the 2002 title winning match, what is your favourite United vs. Arsenal game of all time?

The 2005 FA Cup Final was a lot of fun because we got lucky that day. Totally outplayed, but we won the shoot out thanks to Patrick Vieira’s final kick in an Arsenal shirt. The Battle of Old Trafford was good too – two teams at the top of their game going hell for leather. I always remember Marc Overmars’ goal in 1998 though, that set us on our way for the first Double under Wenger. So I’d go for that one. There was also the 3-0 game that season too…which introduced Freddie Ljungberg to the wider world…

8) Who is your favourite Arsenal player and why?

Dennis Bergkamp. Skill, flair, vision, anger – he had it all. He made three world-class strikers in Ian Wright, Nicolas Anelka & Thierry Henry look even better than they were. He made everything look easy & could bring out the best in anyone of his teammates. The best player Arsenal have ever had.

9) If you could take one United player, other than RVP, who would it be?

Phil Jones. I’d play him as an anchorman in our midfield. He is going to be world class one day – and that’s superb news for the England team.

England played Italy at Wembley in 1934 & SEVEN Arsenal players were selected for the Three Lions first XI that night. No England team prior to or since then has ever seen seven players from the same side fielded at the same time. For anyone interested, England won 3-2 that night.

Manchester United
Ashley Young will miss the rest of the season with an ankle injury, whilst it looks as if Paul Scholes will miss out due to a knee injury, despite the legendary midfielder training on Friday. Darren Fletcher is a long term absentee.

Arsenal
Arsenal are without their striker Olivier Giroud who starts the first of his three match ban after harshly being sent off against Fulham last weekend. Lukasz Fabianski is out with a rib injury, whilst Abou Diaby is a long term absentee with a knee injury.

David De Gea has proved many critics wrong this term. His weak punch against Spurs earned him criticism from all quarters, however – his performance since then have been exceptional, with the young Spaniard making a number of superb stops, with Real Madrid away the pick of the bunch. Ferdinand and Vidic were rested for the game on Monday and with Evans picking up a slight knock, it might be an easy decision for Sir Alex Ferguson to make.

With the wide men, Antonio Valencia has been in good form for the past two games, however – Welbeck has missed the last two fixtures and could be reinstated wide left to combat the attacking threat of Sagna. Nani hasn’t featured since the 1-0 loss at Chelsea in the FA Cup and there are media reports that he and Anderson are set to leave the club in the summer, so he will be looking to impress in the final games of the season. The Brazilian last featured the game previous, in the 1-0 victory over Sunderland over Easter. He was poor at the Emirates in 2011 against Arsenal (United hadn’t won the title at that point), when United lost 1-0 to an Aaron Ramsey goal.

Michael Carrick, like Evans, looked to be struggling against Aston Villa with a slight knock, so it could be an opportunity for Ferguson to rest the exceptionally gifted number 16, who has been one of United’s best players this season. Carrick is second only to Robin van Persie in terms of appearances this season and could be eased into the final games of the campaign. Rooney was exceptional first half against Villa, but struggled second half as the vistors pressed – Sunday will be a superb opportunity against a surging Wilshere and roaming Cazola to see how he performs in a central midfield berth. Kagawa’s qualities are all on show and many Reds are looking forward to his impact next season. The Japanese star definitely operates better off the front man, rather than out wide.

That leaves Robin van Persie up top against his old club. 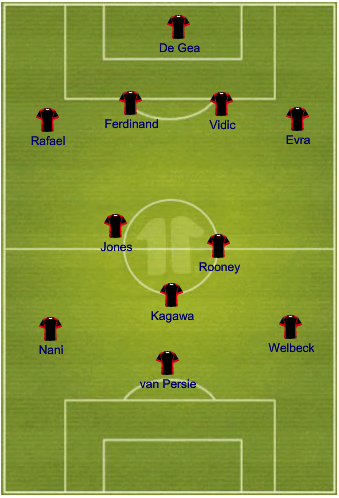 How do you think Manchester United will line up against Arsenal?

Forget guards of honour and forget ex-players returning – Arsenal need the three points against the Champions and Arsene Wenger will set his team up to attack United. Since the 4-2 victory at Highbury back in the February of 2005, Sir Alex Ferguson seems to have found the perfect formula to beat Arsenal, home or away. Yes, there have been Arsenal wins – the 2005 FA Cup final victory and the 2-1 victory in 2008/09 (when United were European Champions) that stand out – but United have been much more comfortable than before that match.

There were games where Arsenal were the best team in Europe and beat United comfortably, but Ferguson would always respond and get a reaction from his players. United’s 6-1 mauling back in 2000/01 was met by a title winning match at Old Trafford the next season by Arsenal. That was the way it was for years, until Arsenal began to sell players, such as the exceptional Patrick Vieira, Barcelona bound Cesc Fabregas and of course, the disgruntled Dutch captain.

The Arsenal fans I have spoken to are pretty level headed about Wenger’s decisions and blame the board more so for the failure to compete at the top of the table. However, there are many that are tiring of Wenger’s lack of success, despite apparent financial constraints (forget what the directors say), the move to a brand new stadium and the recruitment of two two top talents in future captain Jack Wilshere and the once United target Alex Oxlade-Chamberlain. Yes, there needs to be progress for a team, and Wenger’s next challenge will be to get Arsenal to step up to the same level as Manchester United and Manchester City.

Arsenal had a midfield trio of Nasri, Wilshere and Fabregas when they beat Barcelona in 2010/11 – all three were gone or sidelined by the September of 2011, something that I’m sure Wenger did not envision at the start of the season. Not to come across as patronising but, Wenger is a great manager, and I’m sure his Arsenal team will compete for a trophy before he leaves the North London club.

Arsenal have lost three games at home this season, with United losing only two away from home (Everton and Norwich City). Chelsea, Swansea and Manchester City all picked up three points at the Emirates this term. Walcott will surely start the match in the absence of Giroud. The Englishman is Arsenal’s leading scorer this term, with Giroud trailing by a single goal on 17. Jack Whishere should return in the midfield having been on the substitutes bench against Fulham last weekend, but United will no doubt fear the roaming Santi Cazola, who scored late in the day at Old Trafford earlier in the season. Cazola is a wonderfully gifted footballer, two footed, who can take an exceptional set piece. Expect him to start on the left against Rafael, however – the Spaniard will not stay there and will drift infield to influence play.

6 Comments on Arsenal vs. Manchester United preview & line up