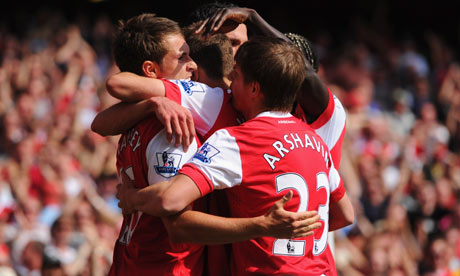 United endured a fourth league defeat this season and ensured that trips to London have not been an enjoyable experience for travelling fans this season. Arsenal meanwhile kept alive slim hopes of a league title whilst the biggest cheers will have come from Chelsea fans as they are now just three points behind the Reds on the same goal difference with a trip to Old Trafford next weekend. Here we discuss the talking points of the match and welcome both sets of fans to contribute to the events.

Selection and set-up away at Arsenal is often something Fergie gets spot on at Arsenal. If by chance and luck or tactical nous, Fergie had a winning system. A 4-5-1 built to soak up pressure and contain Arsenal but able to hit them hard on the counter attack with deadly pace. The key to both of those victories was a solid defence, a three man midfield that would work back and wing play. In the match preview I alluded to the fact that Fergie would have a selection problem. In Rooney and Chicharito, Fergie had a pairing in form however it would mean going away from a system that has served him so well against Arsenal. Personally, I opted for the system over the partnership leaving out Chicharito with Park playing as a CM in the absence of Scholes, Fletcher, Hargreaves and Giggs who is ill.

Fergie opted for fitting in the successful Rooney-Chicharito partnership with this formation: Rooney has done very well in a ‘number 10’ role lately but today there was only room for one striker to start (be it Rooney, Chicharito, Berbatov or Owen). It was key to match Arsenal’s 3 man central midfield with out own. Rooney isn’t a central midfielder and never will be. His instinct is to attack be it from deep or a high line. I’m not singling him out for criticism rather the selection, it wasn’t his choice to play there. He wasn’t disciplined in keeping on Arsenal’s deepest man, Song and nor were his combative skills good enough to play in that position today: Rooney, if asked to play as the third central midfielder, had to copy what Anderson did earlier this season and sit on Song in the middle of the pitch. As the heatmap shows, Rooney was erratic in where he was. That’s part of his game though, he doesn’t like to stick to one position and nor is he someone you’d usual detail with a man-marking job, hence I thought Park would have been perfect for this role. Song was passing in United’s half for 54% of the time today but Rooney was only that deep as a starting position for 25% of his play. Rooney also struggled with his tackling. He’s passionate player who’ll always attempted to win the ball back but too many of his attempted tackles today were unsuccessful, again highlighting the risk in asking him to play the role much more suited to a natural midfielder.

This change in system from Ferguson, to not pick three central midfielders was key. Arsenal most definitely won the midfield battle today with Anderson and Carrick often caught out by slick passing from the Arsenal players. A third natural midfielder in there helping could have made a big difference.

With the scores at 0-0, Ferguson took off the ineffective Anderson. He’d only completed 14 passes in 55 minutes and hadn’t made a single tackle. Having left Gibson out of the 18, there was no central midfielder on the bench – although O’Shea has before performed in a deep central role.

On came Valencia, with Park moving centrally in a deep role. Park is usually very disciplined, he sticks to his man well. However he was asked to play much deeper than usual – previously when he’s played centrally, he’s been the furthest forward of a three, sticking to the opposition’s deepest central midfielder (a famous example would be the job he did on Pirlo in the Champions League at Old Trafford last season). However in a deeper role Park is understandably more uncomfortable.

It was Park’s error that lead to Arsenal and Ramsey scoring the game’s only goal. As the series of images below show, having originally been tight to Ramsey, he lost sight of him and allowed him to be totally free. It’s worth adding that Ramsey’s finish was excellent and despite being free he still had a lot to do in order to pick his spot with players onrushing to attempt to block any effort.

It’s frustrating that the passage of play came immediately after the substitution and tactical change for Park. It was the one rare slip by a United player in that respect during the game. Errors have cost United lately, against Man City the game was similarly won by a United mistake. Anderson would have been tight on Ramsey as he had been all game despite not influencing United’s play greatly when he had the ball.

Ferguson even admitted to MUTV post-match that this was why Arsenal scored:

“When we made a substitution, taking Anderson off, Ji didn’t adjust to it immediately and still went to the left-hand side which freed to Ramsey to score.”

Song and Wilshere standing out

As previously mentioned, the midfield battle was well and truly won by Arsenal today. Song, Wilshere and Ramsey have an average age of just over twenty and a half yet supported by Nasri and Walcott cutting-in with Van Persie dropping deep, they passed rings around United’s often isolated midfield duo of Anderson and Carrick. That isn’t to say it often lead to much other than Arsenal pressure, as often is the case against Arsenal, United were more than happy to let them have the ball 30-35 yards from goal.

Keeping possession is though key and both Ramsey and Wilshere did this well with the latter often demonstrating quick feet to get away from a challenge as well as good strength to hold off players: As the chalkboard above indicates, both Wilshere and Ramsey kept the ball well without really hurting United. Both of them concentrated their passing 35 yards from the United goal with excellent accuracy – Wilshere had a success rate of 87% and Ramsey’s was even better with 89%. They were supported well by Alex Song. He as mentioned was given a bit more license given Rooney wasn’t able to nullify him like previous United players have. As a result he was free to roam about chopping up United attacks with ease: Song made five interceptions, more than any other player on the pitch as well as having an impressive 100% tackle success rate – 9 made, 9 won. He was key to frustrating United and certainly had his best games in months after a poor 2011 so far. Vidic was also incredibly fortunate. Just after half an hour he inexplicably handled a cross from Walcott. At first glance there appeared to be nothing wrong with it as only Van Persie appealed but with the aid of a replay it’s clear that Vidic handled the ball and may well have been lucky to even stay on the pitch having denied Van Persie a goalscoring opportunity.

At first glance (above) it’s hard to tell that there has been any hand involved at all. However on a replay… …Vidic’s misdemeanour is clear to see. It begs the question of why the linesman, who had a clear view, failed to wave for an offence. After Chelsea’s fortuitous win yesterday the subject of video technology reared itself again. My stance is that I would like goal-line technology where by there is an immediate ‘yes’ or ‘no’ that is given to the referee if the ball has or hasn’t crossed the line. Human error is key to the game, it always has been and importantly it doesn’t interrupt the flow of the football. Referring decisions to a video referee would disrupt the regular action and even then, decisions are still often unclear. Feel free to debate this point further and elaborate on how you feel in the comments section below.

Arsenal may well have been aggrieved by the failure to award a penalty but United too had their own penalty appeals turned down. First, Ramsey charged down a shot/cross with his hands and the referee awarded a free kick despite replays showing the incident happened in the penalty area. More clear-cut though, late on, Owen was clearly fouled by Clichy (see image below) inside the area but the referee, who’s sight may well have been blocked, gave nothing.

Sir Alex Ferguson chose not to shuffle his strike-force or defence as United travelled to Arsenal, unbeaten in their last 7 meetings. Instead he opted to select Nani and Park out wide with Carrick and Anderson in the middle – the system was heavily reliant on Rooney’s ability to offer the qualities of a midfielder rather than an attacker. Whilst Arsenal lost their skipper Cesc Fabregas to injury yesterday.

Arsenal started the match strongly, having more than 75% possession in the opening ten minutes. Wilshere had the games first chance as he fired wide from an uncharacteristically poor Vidic clearance. Chances were few and far between though, Walcott’s outstretched leg could only direct Clichy’s shot over the bar whilst for United, Fabio’s breakaway couldn’t find Chicharito – in truth the Brazilian should probably have had a shot himself. Just after thirty minutes the half’s talking point occurred. A Walcott cross appeared to be cleared by an excellent Vidic header only for replays to show he’d used his arm. Arsene Wenger having seen the replay on the big screen was understandably furious.

Arsenal were forced to bring on Arshavin for Nasri at half time due to an injury but United kept their shape the same and started the half well with Rooney’s free-kick saved by Szczesny. United then made a tactical change, Park was moved centrally to allow Valencia to be brought on to replace Anderson. Immediately an Arsenal attack saw Park lose his man and Ramsey was able to pass the ball accurately into the corner of the net from 12 yards out. It was Arsenal’s first shot on target all game – Van der Sar would only be tested once more on what was a quiet afternoon for the Dutch keeper.

Having fallen behind, United responded. Vidic headed wide when he should have at least hit the target and following a good run from Rooney, Nani shot straight at Szczesny when he should have squared the ball – United had broken with four men against Arsenal’s two. There was further drama with the referee – Ramsey handled the ball inside the area but Mr Foy only gave a free-kick. Then with three minutes to go, Owen was brought down from behind by Clichy inside the area but the referee gave nothing at all much to the displeasure of Sir Alex Ferguson. Despite ending the game having had more possession and 7 shots on target to Arsenal’s 2, United couldn’t muster a goal and slumped to a fourth league defeat of the season.

United’s next game is home to Schalke in the second leg of the semi finals of the Champions on Wednesday 4th May.