Rafael celebrates opening the scoring at QPR for Manchester United

In theory, the bottom side and lowest scorers hosting the runaway leaders and highest scorers should have been a formality but with both sides having so much to play for, any assumptions would be dangerous. United have been in good league form with no defeat for over three months whilst QPR are embroiled in a difficult relegation battle. Wanting to avoid an upset, Ferguson called on his experienced players for this game and rewarded Nani with another start after his display last Monday. As ever, we welcome comments from both sets of fans.

Many will point to Rio, Carrick or maybe van Persie as United’s most consistent player this season. Plenty though will also cite Rafael. The likeable, smiley, happy Brazilian is having his best season yet in professional football. Even in his two worst games – Reading and Real Madrid – he recovered. At Reading he was hauled off but returned in the next league game away at City with a great performance. At Real Madrid, he was twisted inside and out by their wingers before putting in a very mature second half. At 22, he’s already firmly United’s main right back and one of the best in the league.

His performance at QPR will no doubt be remembered for the rocket of a volley that put United ahead. Travelling at 62mph, it was probably wise that Samba ducked out of the way or he’d have had his head taken off. Technically his effort was flawless, keeping a volley struck so low off the ground at a height that’s below the crossbar is insanely difficult and yet not only did he manage that, but he also found the corner of the net, just to add to the aesthetics of it all. But while it was the undeniable highlight of the game, Rafael also contributed spectacularly in other ways. His first-half display had everything in it: that wonderful goal, followed by a crucial goal-line clearance at 1-0, which he followed up moments later with a magnificent floated ball over to Robin van Persie, whose volley was well saved by Julio Cesar. Truly all-round excellence from one of our most improved players.

Not so regular watchers may know more about Rafael’s attacking than defending. Like any Brazilian fullback, his natural inclination is to go forwards – and he’s good at it – but his defensive work is much improved and as vital as anything he does. Importantly his ability to turn defence quickly into attack is a huge asset, as seen on a few occasions yesterday. For the third league game running, he was part of a defence that kept a clean sheet – he and United are peaking at exactly the right time.

Whilst Rafael celebrated his thunderbolt, van Persie lay in agony after falling colliding with a BBC cameraman who was in a pit by the pitch. Due to a lack of space at Loftus Road, cameramen (and camerawomen) are perched much closer to the action and hence as soon as Robin fell off the pitch, he was involved in a collision.

Due to the fact it was an impact injury, one hopes that it’s nothing too serious. After the game, Ferguson said that he had a badly bruised hip and would be assessed this week. Chances are that it’s nothing a week of rest and painkillers won’t fix. If it’s worse though, it’ll be interesting to see who takes up the goals burden. Robin’s contributed to nearly a quarter of United’s goals in all competitions and has laid on 11 assists, joint most with Rooney.

Interestingly, for someone who had an ‘injury prone’ tag, Robin’s one of only three players at the club yet to be ruled out of starting a game due to injury. Buttner and Cleverley are the other two. United have generally been fortunate with strikers and injuries – Rooney may have sat out of eleven games but Hernandez and Welbeck have only missed one each. Hopefully Robin won’t be joining them.

As you probably know, we’re big fans of Michael Carrick at this site, so it was quite pleasing to hear the away fans singing his name for long periods of the second half. While less important, it’s also nice to see him getting praise (belated, but still welcome) from the press, pundits and fellow players this season. That said, it’s strange to see him suddenly receiving plaudits from all quarters; his form is only slightly better than last season, and his game hasn’t changed much in the six and a half years he’s been at the club. Perhaps he’s become more visible as Scholes has faded from his prior majesty, and Carrick is now undeniably first choice in the United engine room. In any event, he gave another fine performance at Loftus Road.

Funnily enough, though, the song with which he was serenaded – “You Wouldn’t Believe It’s Not Scholes” – wasn’t particularly appropriate for this game. At 80%, he had a lower pass completion rate than his usual standard (around 88% for the season), and he hit quite a few wayward long- and medium-range passes throughout the game. However, it’s the other side of his game, the defensive side, which really shone yesterday. You would definitely believe it’s not Scholes, because his tackling was excellent!

Carrick was a model of control in the second half, blocking out, tracking back to the edge of the United box, and keeping the likes of Taraabt very quiet. With a revenge mission against Norwich next Saturday, and of course the return leg of the Real Madrid tie coming up next week, Carrick will need to show leadership in screening ahead of the back four. Given that Jones is likely to be out for both games, the responsibility on his shoulders will be massive. Fortunately, with the kind of displays he’s shown in this game and others recently, he looks up to the task.

Another game. Another goal.

There’s little more that can be said about him but it was nice to see him play so well in the middle after performing admirably out wide recently. In fact, Giggs has been a bit hit and miss in the middle, particularly early this season. However, with Carrick putting in a disciplined performance and QPR oddly reluctant to press high, Giggs not only had space but was seldom required to do a lot of deep defensive work. Generally he won’t be a viable option in the middle but on the odd occasion in the right game and with the right set up it can work. He’s a remarkable specimen and the way he keeps himself in shape you’d be amazed if he didn’t play on for another year.

For the first time in goodness knows how long, we saw good (if unspectacular) performances from our wingers. After returning from injury on Monday, Young had another good game, holding on to possession, linking well with the midfield, covering for and having nice interchanges with Evra, and crucially, putting in a number of excellent crosses, which Nani and Chicharito couldn’t convert. Crosses beating the first man, either finding a teammate or spinning into dangerous areas – a sight for sore eyes, as I’m sure most United fans would agree.

Nani, in keeping with his more mercurial nature, flitted in and out of the game, but when he was ‘in’ his contributions were telling. He had long spells of being very quiet, but at times showed some good movement – getting into the box for the aforementioned header – while putting in some good passes and crosses of his own, and near the end, providing a fine reverse pass to set up Giggsy’s clinching goal. He also put in a good defensive shift, tracking decently at times against Traoré. Perhaps he’s realised that Fergie tends to favour wingers who take up defensive responsibilities, especially for the big games.

Unfortunately, while Young and Nani showed some improved form, the same couldn’t be said of Valencia after he came on. Another slow, timid display followed, one which we’ve become all too familiar with this season. Sir Alex clearly likes him – he’s started almost all the important games this season, despite his sustained dip in form. But it’s hard to see how that can continue, unless we see a marked improvement from the Ecuadorian, who was previously a model of consistency in red.

United maintained a healthy lead at the top with a thoroughly professional and controlled performance away at QPR. Goals from Rafael and Giggs meant that it was the first league game since Swansea that a striker had failed to score in. Concerns will be with van Persie’s injury but the form of Nani in particular means there’s much to be positive about. City brought the gap back down to 12 points with a victory over Chelsea but have two tricky looking away ties to Villa and Everton coming up next whilst United host Norwich and Reading.

With eleven games to go, it’s fair to say that the title looms closer! 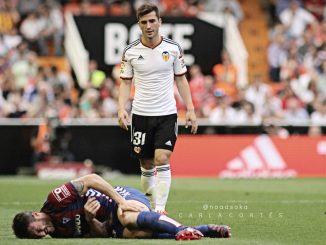