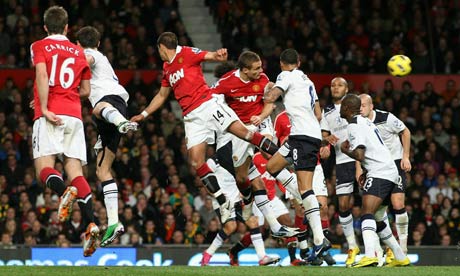 Another dreaded away fixture. Granted, the away curse has subsided slightly with the New Years Day win at West Brom, but Tottenham Hotspur is an entirely different nemesis. It has been a crazy season which has seen Tottenham surpass defending Champions Chelsea in the Premier League for a place in the top four. There is positive news ahead of the journey to North London though. Wayne Rooney, Nemanja Vidic, Paul Scholes, and Edwin van der Sar are all in contention for Sunday’s fixture against Spurs after spells on the sideline.

Three points against Tottenham would be massive in the title race. While they sit on the outskirts on the title race, Tottenham is a very talented and threatening team. To come away from White Hart Lane with three points is a difficult task, but one that may be defining of champions. It is comforting to know that Manchester United has not lost to Tottenham since 2001. Of course, that doesn’t pertain to all of the miserable draws we’ve suffered away from Old Trafford this season. Hopefully, the win at West Brom was the end of that poor away form.

In some of the tougher away fixtures this season Sir Alex Ferguson has packed the midfield using a 4-5-1, so it is perhaps a bit bold that I’m predicting a 4-4-2. If Van der Sar is healthy, then I fully expect him to start. There is no reason to stray from the first choice back four. Rafael silenced Gareth Bale when Tottenham came to Old Trafford, and I fancy him to do exactly that again on Sunday. With Vidic back in training, he should reclaim his spot next to Rio Ferdinand in the heart of defence. And of course, the ever present Patrice Evra completes the back four. The midfield and strikers give the line up some flexibility. I’m predicting a midfield four of Nani, Anderson, Michael Carrick, and Ryan Giggs with Rooney and Dimitar Berbatov leading the line. This would allow for the team to shift to a 4-3-3 if necessary. Rooney could go wide left with Nani shifting to a more advanced role on the right, leaving a midfield trio of Anderson, Carrick, and Giggs. This sort of flexibility would be key depending on the flow of the game. When looking for the threats in this Tottenham side, you need not look beyond Gareth Bale and Rafael van der Vaart. The midfield duo have been terrorizing defences all season. Bale is full of pace, and unlike Theo Walcott, that isn’t his only asset. He has a fantastic ability to both cross and score. Like I mentioned earlier, though, Rafael did a fantastic job defending him last game. If we can get the same sort of performance from the young full back that’d be a major part of the battle. Van der Vaart has also been a revelation since his arrival at White Hart Lane. Often positioned right behind the striker he’s capable of both creating and scoring. Ferdinand and Vidic will be busy trying to deal with his threat.

There is some cushion at the top of the table for United, with Manchester City trailing by two points, albeit having played two more matches than United. It is getting to the point now where we can no longer afford to throw points away. It goes without saying that the longer United can maintain this lead in the Premier League, or possibly even extend it, the better our chances of a record 19th league title. The title is ours to lose, but I have faith that the squad can hold on until May and reclaim the Premier League.