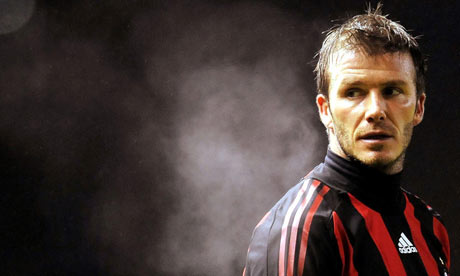 Manchester United have been drawn against AC Milan in the last 16 of the Champions League, who are currently sitting in second place in Serie A.  United haven’t had the best record against AC Milan over the years in the European Cup – winning three out of the eight games played and losing the remaining five.  United and Milan have history in the competition and the first clash occured post Munich in the spring of 1958.  United beat the Rossoneri 2-1 at Old Trafford but were outclassed in the San Siro in the second leg, losing 4-0 in the process.  The game will also see the potential return of former United midfielder David Beckham – who left the club for Real Madrid back in 2003.

So who is excited about this game? I personally can’t wait for it! Yes, we could have got an easier draw, but this is what European nights are all about. Onto the pitch will walk United, the current English Champions and three times winners, whilst the opposition boasts seven European Cups – five of those in the past twenty five years. Ronaldinho, Pato, Nesta and Beckham will be hoping that they can look to past heroes for inspiration in trying to overturn United – who have not failed to in the last sixteen since 2005/06, when the club failed to get out of the group stages.

Milan are nowhere near the force they once were in the 80s, 90s and even early part of this century. The loss of Kaka, Maldini and Carlo Ancelotti is one summer is obviously going to effect any club that have relied on the services of three club ‘legends’ for so long – but the club hasn’t won Serie A since 2003/04 and have had to live in the shadows of their city rivals Internazionale. Our game against Inter last year was a thrilling contest over the course of both legs. I can honestly say, i’ve never seen a more dominant performance from an away side in Europe without coming away with a win. The 0-0 draw looked like a stereotype Italian result – keep it tight in the first leg and then scrape a 1-0 victory in the next. United battered Inter on their own turf with Giggs, Berbatov and Ronaldo squandering chances to score. Many Reds will be hoping for something similar again.

Milan are closing the gap on Inter – but the Italian league is no where near the force it once was. Gone are the days of the superstars flocking to Calcio. I remember growing up and looking at the likes of George Weah, Pavel Nedved, Marco Van Basten, Zinedine Zidane and Diego Maradona over in Serie A and it made me jealous. The lure of the Lira is no more and Italian fans now follow their teams in crumbling stadiums, watching stars like Kaka and Ibrahimovic leave for Spain and the constant accusations about the corruption within Calcio. Ronaldinho was once the best player in the world. From 2003 to 2006 he was unstoppable – sambaing his way past fullbacks, hitting innovative freekicks and playing football how you want the game to be played in the attacking third. Like all legends of the game – it doesn’t last forever and his inevitable fall from grace will happen to Cristiano Ronaldo and Lionel Messi in years to come, its happens to every footballer. However, his skill and inspiration will be a problem when we face Milan. Then there is the duck – Ronaldinho’s fellow country man Pato – who bagged a brace in the Bernabeu earlier in the season. Then there is Seedorf, Pirlo and Nesta to contend with. United will face a class act of a club in February but providing our injury situation clears up – we should be able to reach the next round. I’m confident and looking forward to an excellent contest.

I also did a post just before the Chelsea game on Fergie vs. Ancelotti, which looks at a number of clashes over the years between United and Milan.