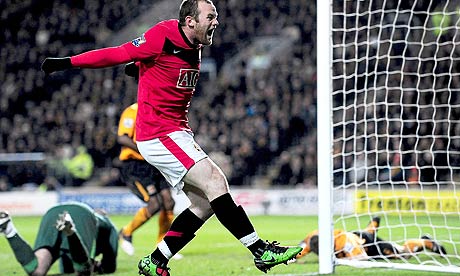 Manchester United bounced back from a 3-0 hammering at Fulham by beating relegation threatened Hull City 3-1 at the KC Stadium. Goals from Wayne Rooney and Dimitar Berbatov either side of an Andy Dawson own goal, sealed the win as United keep in the hunt for a fourth successive title. United welcomed back Wes Brown, Rafael Da Silva and Nemanja Vidic from injury as United lined up with a more recognisable backline.

United looked a lot more comfortable lining up with four at the back at four across the midfield, unlike the 3-5-2 formation Ferguson was forced to use in the last league game at Fulham. Many Reds accused Ferguson of getting his tactics wrong – however, hopefully after watching United line up with a 4-4-2 formation against Hull City on Sunday, some fans will understand why the manager was forced to play such an unorthodox formation.

United had to wait until two minutes into injury time at the end of the first half before finding the back of the net. Efforts from Giggs (shot over the bar) and Rafael (shot saved by Myhill) were squandered before Wayne Rooney’s strike gave United the lead. A Fletcher cross from the right was missed by everyone at the near post but wasn’t by United’s number ten attacking the ball through the centre. It was Rooney’s fourteenth goal of the season in all competitions (thirteen in the Premier League), whilst it was the third assist from Fletcher.

Hull City equalized in the sixtieth minute after an awful backpass from Wayne Rooney, which let in Fagan who rounded Kuszczak and then crossed for a waiting Altidore, who was then bundled over by the full back Rafael. Fagan took the spot kick and struck a shot to the left of Kuszczak, who was diving to his right. Although it was the young Brazilian that gave the spot kick away – the blame lay with Rooney for his woeful backpass.

Hull City pushed forward, searching for a win that would lift them clear of the relegation zone, however it wasn’t to be and their swashbuckling approach ultimately led to their down fall after United scored from a counter attack on the 73th minute. Dimitar Berbatov picked the ball up on the half way line before shifting the ball to the galloping Giggs. Giggs broke into the Hull City half on the right hand side, before releasing Wayne Rooney who struck a low cross towards Park who was waiting at the far post. Park couldn’t convert as Hull City’s Andy Dawson got there first and his attempted clearance was smashed into the back of the net. Wayne Rooney’s power, pace and superb low cross had given United the lead.

It got even better for United eight minutes from time after a solid header from Wes Brown lifted over the advanced Hull backline for Rooney to latch onto. Rooney’s constant running in behind was a worry for Mendy and Gardner all afternoon, however the pass that was to follow from Rooney was quite simply out of this world. His right footed pass into to the path of Berbatov was sublime. It demonstrated the accuracy, vision and technique that Rooney has in his arsenal. It also, on the basis of this game, shows his character after his horror backpass to Kuszczak. Its Wigan up next for United and Sir Alex Ferguson will be hopeful Brown and Vidic will be again available for selection.