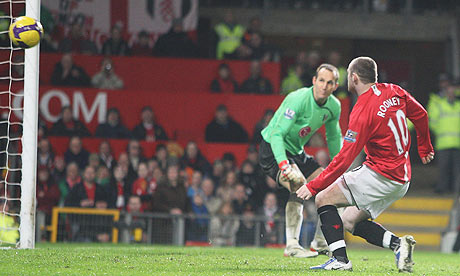 A 3-0 rout of Fulham sent out an intimidating message to the Premier League as champions Manchester United established a 5 point lead in front of Liverpool at the top.

It was as routine a victory as Sir Alex Ferguson could have hoped for and the points were never really threatened after Paul Scholes had volleyed the home team ahead. Michael Carrick’s corner was met by Scholes from the edge of the box with trademark velocity but Fulham keeper Schwarzer found the strike too hot to handle and the ball rolled into the corner.

The Red Devils pressed with urgency for a second and were denied when Carlos Tevez’s shot from a Dimitar Berbatov pass was ruled out for offside, but achieved their just reward shortly before the break when Berbatov took advantage of Fulham’s defensive shambles – perhaps the reaction to an exhibitionist home side passing move – to tap home what seemed an unassailable goal.

The second half became merely a procession as Fulham declined to threaten and United declined to press home their superiority save for Ronaldo’s constant desire and the introduction of the returning Rooney, who scored the third and final goal converting Park’s mis hit shot with his first touch.

The easy return of Rooney and extension of the record breaking defensive legacy will have pleased Sir Alex but the ease in which they discarded potentially tricky opposition coming into a vital stage of the season will possibly have given him more cheer.