Manchester United looked like a brilliant team in the first few weeks of the season. They were scoring goals at will, and seemed to dominate every opponent that stood in front of them. But that hadn’t been the case during the past few weeks. The team looked inconsistent, and struggled on both ends of the pitch at times. The results were still there (for the most part), but the team did not look good.

Fast forward to November 18, and Manchester United certainly look like a different team. Sure, it’s only one game. But The Red Devils produced a stellar effort against Newcastle United, and showed they remain very much alive on the title race. Goals from Anthony Martial, Chris Smalling, Paul Pogba and Romelu Lukaku lifted United to a huge win at Old Trafford. But the main thing we learned from this game was not the win, or the fact that United have been unstoppable at home this season.

No. The main thing we learned this Saturday is that United is an entirely different team when their star players are on the pitch. We are talking about two in particular: Pogba and Zlatan Ibrahimovic.

First, let’s start with Pogba. The Frenchman return to action following a nagging hamstring injury that kept him two months away from the pitch, and needed less than 45 minutes to prove why he is one of the most expensive players in the world. He assisted Martial with an excellent cross, and later scored after a beautiful assist from Marcus Rashford. Scoring and assisting on his return is exactly what the fans expected out of him, but he did more than that. He looked composed on the ball, moved all over the pitch, and emerged as an undisputed leader in the middle of the pitch.

Then, there’s Zlatan. Ibrahimovic returned from suffering a ligament injury in April and made his presence felt immediately. The lone fact of him being out there makes United a far more dangerous team. And in what would have been a spectacular return, Zlatan came close to score with a bycicle kick but his effort missed the target. Still, the Swede played and returned to action roughly seven months after his injury. That itself is quite an accomplishment considering his age.

Zlatan will only get better as he gains match fitness. And we could say the same for Pogba, too. The return of both should only make United better. And there’s no question the team needs their star players to contend for the league title. Fortunately, they returned just in time and when the club needed them the most. 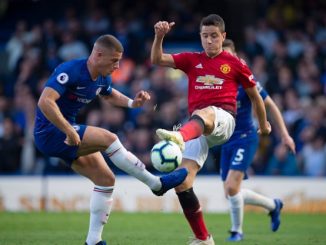