Reported Manchester United target Ederson looks set to slip out of Jose Mourinho’s grasp, with The Guardian stating that the Benfica goalkeeper is set for a £34.9 million move to rivals Manchester City.

The Red Devils have been linked with a number of new stoppers, as there are growing concerns that current number one David De Gea could be set for a summer switch to long-term admirers Real Madrid.

United are believed to have been keeping tabs on Brazilian Ederson, who has impressed this season for the Portuguese giants both domestically and in the Champions League.

The latest report suggests that City have all-but agreed a deal with the South American custodian and that he is expected in Manchester this week to undergo a medical and complete a move to the Etihad Stadium.

Obviously every United fan’s first-choice outcome would be De Gea staying at Old Trafford, but it remains to be seen if the Spaniard’s heart is with Mourinho’s men or whether he would prefer a return to his homeland.

Should the Spain international stopper be sold this summer, the Red Devils would be losing arguably the best goalkeeper in the Premier League and an indispensable member of the team.

Back-up Sergio Romero is undoubtedly an able player, with his record at international level for Argentina impressive and the South American performing well when called upon at United.

However, De Gea’s potential departure would surely spark a reaction from Mourinho and the possible addition of another keeper before the transfer window closes.

Ederson looks set to be a star for years to come and missing out on him would be a blow for the Old Trafford side if they are looking for a new goalkeeper, with alternatives that are up to the required standard and attainable few and far between.

Speculation in the press has linked Atletico Madrid’s Jan Oblak as a possible target for United if De Gea does leave, while the availability of Jordan Pickford after Sunderland’s relegation could be an interesting option.

However, regardless of what happens with United’s current number one this summer, Ederson looks very likely to be lining up for rivals City next season rather than in Mourinho’s side. 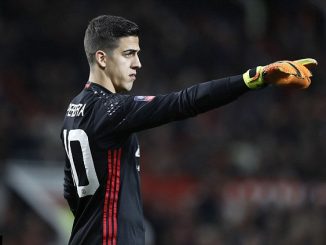