Ander Herrara has quite a tough task. When starting a new job, in whatever you do, you want to make sure you make an impact and show you can offer a little more than those who went before you. Herrara has the quite daunting task of treading in the footsteps of Paul Scholes at club level and Xavi Hernandez at International level – two of the finest European midfielders the world has ever seen.

Scholes was the heart of United for so many years, had a sublime range of passing and was excellent at scoring goals from midfield. Xavi, although his influence is waning in the autumn years, was inspirational in the heart of Barcelona’s and Spain’s midfield for over a decade. Both have set the standards for future players and fans will remember the special moments both players brought to the game.

Herrera, who is yet to win a full international cap, has excelled as the season has progressed in the centre of the park and his proving his worth at a club who are now closing in on a Champions League spot. A top performance against Liverpool and two goals against Aston Villa have highlighted his worth in United side growing in confidence.

The Spanish contingent
Alongside David De Gea and Juan Mata, Ander Herrera makes up the third Spaniard in a United side so long devoid of any flair or creativity during the David Moyes era. It was of course Moyes who brought Mata to the club, but it is in recent weeks under Louis van Gaal that the former Chelsea man has stepped up a level. The wonder strike against Liverpool has his name now cemented in United folklore and his linkup play with Herrera for United’s third against Aston Villa demonstrates the growing confidence of United’s number 8 and the understanding the players have with one another.

De Gea has been United’s best player this season – without a shadow of a doubt. The big question this summer will be “Can Manchester United keep David De Gea is Real Madrid come calling?“. The early criticism aimed at United’s Spanish goalkeeper was laughable, considering his age and the fact he had zero experience of playing the Premier League. Sir Alex Ferguson managed him well and rested him when necessary.

But there were always glimpses of the world class goalkeeper he would become. For example, ironically against Juan Mata, the unbelievable last minute save in the 3-3 draw a few seasons back. The saves against Arsenal, Everton and Liverpool do not even do him justice for the amount of points he has won for the club. If nobody knows what the state of the country will be in the morning of May 8th following the general election, you can be assured – David De Gea will be Manchester United’s player of the season.

Then there is Ander Herrera, probably the most junior, in terms of stature, of the Spanish contingent. Herrera’s botched transfer from last season summed up the David Moyes reign, whilst the £28million transfer fee for a player with zero senior international caps, considering ex-United target Cesc Fabregas – who is approaching a century of Spain caps – cost £27million, could have been considered an over inflated price for such a player.

But United fans are delighted with the progress of Herrera. Industrious, competitive and good on the ball, Herrera showed his worth at Anfield and was unfazed by the hostile environment. His brace against Aston Villa has taken Herrera to seven goals this season. Consider the return from last season by United midfielders. Michael Carrick and Tom Cleverley notched up a single goal each whilst Anderson, Darren Fletcher, Marouane Fellaini and Shinji Kagawa failed to score a single goal between them. In Herrara United have an all action midfielder who is becoming a vital part of that three man midfield.

A team without Angel Di Maria, Robin van Persie and Radamel Falcao
If you would have said at the start of September that United would be going into the derby without Angel Di Maria, Radamel Falcao (both choice) and Robin van Persie (through injury) you’d be worried as a United fan. However, United have been in great form over the past month and will be confident going into the match on Sunday.

United have not beaten City at home since that 2-1 victory in February of 2011, when Wayne Rooney scored that sublime bicycle kick. In that time, United have lost 6-1, 2-1 and 3-0 – with City winning the title twice and United once. Both sets of fans would concede that the current campaign is Chelsea’s to lose – but a victory at Old Trafford on Sunday would send out a message for either manager.

Louis van Gaal’s stock continues to rise whilst Manuel Pellegrini will do well to keep is job if City end up trophy less, which is looking likely. Below is an overview of United’s best side at present and the potential line up against the current Champions: 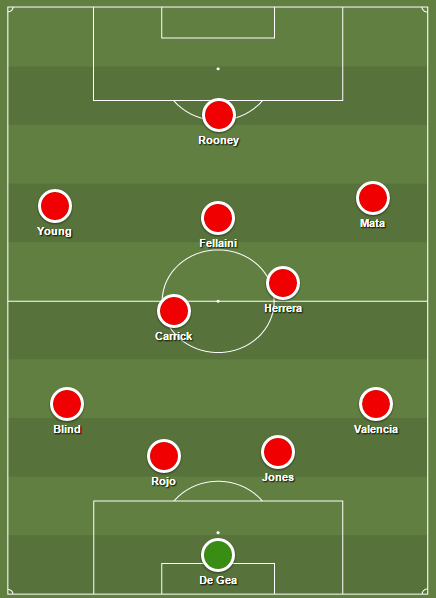 Ander Herrera is an important component of that side and will be extremely vital in closing down and tracking the movement of fellow countryman David Silva from his usual wide to central movement. Paul Scholes had many fine moments against Manchester City over the years, lets hope Herrera can continue his fine form in one of biggest games of the season.

West Ham vs. Manchester United view from the oppo