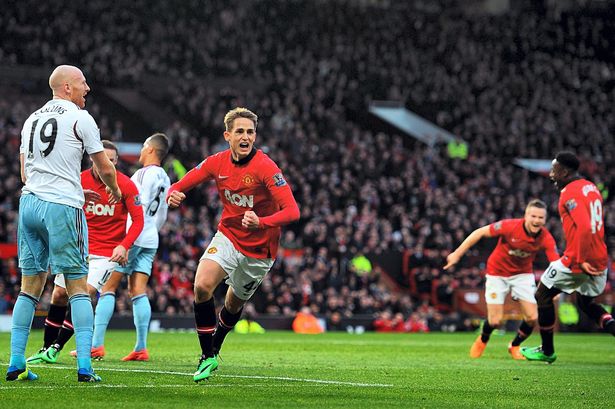 As we hit the Christmas and New Year rush it looks like United have started to rediscover their own sense of urgency on the pitch.

Goals from Danny Welbeck, Adnan Januzaj and Ashley Young, all with their own differing beauty made this a comfortable afternoon for the reds with a 3-1 win. It appeared at times almost like a United team under Sir Alex who didn’t let their opponents ever get a significant foothold in the game. Plenty of positives to digest and very few negatives (Buttner) with now only being 4 points from the top 4 made it a solid afternoons work.

Here we pick out some of the talking points of the afternoon and invite feedback/thoughts from both sets of fans.

The Rise and Fall of Adnan Januzaj

Adnan is the most exciting talent we have seen since the boy Ronaldo turned Bolton inside out in a stunning debut. It appears that he is destined to be our next number 7 and the very future of the team. His first goal at Old Trafford was a joy to witness and showed the skills that the first team has been sorely lacking since the last great number 7 headed for the circus of Madrid. His ease of moment, ability to pick the right option and overall confidence are way the beyond the small number of years he has under his belt.

In the last few games we have adopted a specific game plan going forward that looks to get the best out of Adnan. A focus on attacking down the right through a much more effective Valencia and Rafael, who is slowly getting back to his best days opens up the centre for Rooney and Januzaj to float about. On several occasions Januzaj came inside to link up with Rooney and Welbeck in quick moving, one touch play. With the added experience he is getting each week Januzaj can only get better and he will only get better, this kid is the real deal.

Unfortunately it wasn’t his sublime goal that plenty in the media were reporting but more his booking for simulation in a dual with Collins. In the Stretford End it looked at first like he had been clipped but on review it was clear that no touch was there, a booking was the correct decision.

This is a situation that has arisen several times already this season and is one we would like to see dealt with going forward. Januzaj is being targeted for ‘extra treatment’ in much the same way like many of the younger rising stars in World Football today. It is one thing to avoid tackles and another looking to win free kicks, Januzaj has been guilty of both so far. Yesterdays booking for me was a case of trying to win a free kick and wasn’t really necessary. He needs to make sure he cuts out trying to win the free kicks so when the time comes for him to avoid the nasty tackles he gets the justice he will deserve.

A Confident and Competent Midfield

We need a couple of new midfielders, there is no doubt about that and hopefully January will see at least one arrive.

Yesterday’s pairing though of Jones and Cleverley did exactly what was required of them, keeping the ball moving quickly and pressuring mistakes from West Ham. United don’t currently have ball winners in midfield and with Carrick in the side it’s been more about intercepting the ball rather than winning it. Jones has shown in several performances this season that he can offer pace and strength in the middle of the park. Against West Ham he picked up the loose balls well and was confident to burst forward with the ball when gaps appeared. Jones still looks to be a central defender long term but more performances like these could suggest a real future playing in a deep midfield role.

Tom Cleverley appeared to believe too much of his own hype when he emerged last season. The TC23 brand stuff irked many fans who felt he had not done enough yet to justify such things. This season overall has been tough for Cleverley but in the last 2 weeks he has started to show glimpses of his abilities reappearing. Cleverley is best when he’s keeping it simple, short sharp passing and linking play up. His was excellent at this yesterday and offered the pivot between going forward and the back line.

If Cleverley can keep this level of ball retention and pace he will start to win over those fans who doubt his long term value to the team.

The biggest difference for United against West Ham and Villa to previous performances was the intensity and pace of play. It has previously taken the side too much time to get into games meaning we are playing catch up to our opponents. Against Villa and especially West Ham yesterday, we looked to get forward from the off and put opponents on the back foot. The quick one and two touch play between Welbeck, Rooney and Januzaj in particular kept West Ham constantly moving and unable to set themselves. It was no coincidence that the opening goal for Welbeck came from a quick free kick and fast passing between Rooney and Welbeck. It was almost reminiscent of Yorke and Cole in the Nou Camp, the way the ball fizzed between the two before being dispatched.

Players like Welbeck, Januzaj, Cleverley and Rafael have been developed at United to be confident at playing quick football. One touch, quick movement and control to never let the opponents settle. The moment more of these players are integrated into the team, the more we will see that style of play. Welbeck leading the line has coincided with an improvement in going forward and that understanding between the players is obvious to all.

We all know that additions are needed to make this side truly competitive at the top of the league but things are not as dark as some seem eager to suggest.

Players like Januzaj, Welbeck and Jones will be at the heart of the next side and we need to persevere so we can see more football like yesterday on a more consistent basis.