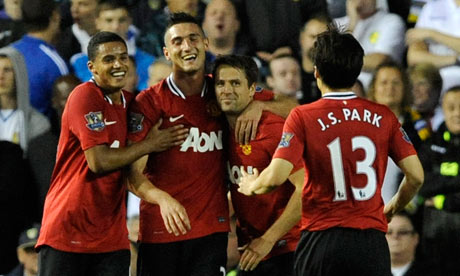 Manchester United travelled to Elland Road for the first time in eight years to record a 3-0 win over their old rivals. United fielded a much weakened side that included Michael Carrick at centre half and Federico Macheda on the left wing. Michael Owen bagged a brace whilst Ryan Giggs, who captained the side, scored the third goal in a very convincing win. United also gave first team debuts to Ezekiel Fryers, Paul Pogba and Larnell Cole – who will no doubt want to experience more football in this competition.

Michael Owen made his first appearance of the season for Manchester United and impressed throughout the match. Owen scored a well taken first goal following some good work from Dimitar Berbatov and Ji Sung Park. His left footed strike in the inside of Lonergan’s post, before nestling in the back of the net, however it was Owen’s build up play that was even more impressive than his finishing ability. Owen was always available for passes into feet, either with a defender behind him or dropping deep to try and influence play. His second goal was exceptional and showed the quick feet of the former England striker. Macheda played the ball wide out to Diouf, on the right hand side, who proceed to cross the ball low into the edge of the box where Owen was waiting. United’s number seven proceeded in trapping the ball with his right foot, before nearly instantaneously striking the ball with the same foot passed the helpless Lonergan.

Owen was unlucky in the second half not to notch up a hattrick, with a lob that just went the wrong side of the post. Owen is up against Wayne Rooney, Javier Hernandez, Dimitar Berbatov and Danny Welbeck – meaning that he is currently fifth choice striker for the Reds. His performance tonight, evidently against weaker opposition, will give Fergie food for thought – however, I can only see Owen starting games in this competition if all the striker are fit.

Macheda/Diouf: Fair assessment on the wing?

Ok, I will admit it, I once thought Federico Macheda would be the next big thing, however – the young Italian has not progressed since his phenomenal introduction to the Premier League, where he scored winners against Aston Villa and Sunderland. Macheda’s stint at Sampdoria wasn’t a success and his deployment as a left winger won’t have Ashley Young or Luis Nani quaking in their boots. Having said that, it would be unfair to judge their first team involvement based upon a stint (where they were both substituted) as wide men in the League Cup.

Will Diouf ever be good enough to start for United in a big Premier League clash or a meaningful European fixture? For me, no chance – however, in order to challenge on multiple fronts, United need to have a big squad so that key players remain fresh. With Macheda, the jury is out – although I’d like to see him move to Premier League club (like Welbeck and Cleverley did) on loan to further his development.

Much had been made of Paul Pogba’s inclusion in the build up to the match. I have been lucky to watch Paul Pogba on a couple of occasions for the youth team and he has always impressed me. Many have claimed he is the natural heir to Arsenal’s former captain Patrick Vieira, presumably because of his build and nationality, however from what I’ve seen – his deployment from deep (including his range of long passing) and nimble footwork when pushed on in the attacking third (think of the goal against City) highlights his dynamism and vision – rather than the power and short passing that Vieira was famous for. Don’t get me wrong – Vieira was a superb footballer and I honestly thought we were close to getting him in 2001 prior to the purchase of Seba Veron, however I think many cite the lazy comparison based upon his physique and nationality.

Despite the build up being about Pogba, Fryers was given a start by Fergie alongside Michael Carrick in the centre of defence and didn’t look out of place. The youngster had to leave the field of play ten minutes from time after picking up an injury, which saw United’s record signing Dimitar Berbatov drop back in the defence to help the side out. Larnell Cole was brought on for Macheda for the last thirteen minutes of the game. Tonight, United had seven players who came thorough the youth ranks included within the first team squad – Danny Welbeck, Federico Macheda, Ben Amos, Larnell Cole, Paul Pogba, Ezekiel Fryers and of course – one Ryan Giggs.

Depth of squad and versatility

Michael Carrick and centre half and Antonio Valencia as right back? You don’t usually see that in a Manchester United fixture, especially at the start of the game! Carrick has played centre half before (in the December of 09 when United were hit by horrendous defensive injuries) and Valencia was deployed as a right back when United travelled to Chelsea last season following an injury. Both Carrick and Valencia demonstrated their versatility (many will question that compliment of Carrick I guess) and professionalism in playing out of position in a league cup game, the lowest priority competition of all four this season, I’m sure you’ll agree? Although many will claim that Carrick is now playing second fiddle to a host of United midfielders, Valencia is recovering from injury and regaining match fitness. His excellent form towards the end of last season saw him start in the final against Barcelona, replacing Luis Nani – who was exceptional for the majority of the season and won theManchester United player of the year award.

Both players obtained valuable playing time against Leeds United and will not doubt be selected, in the squad, for the trip to Stoke City on Saturday evening.

Manchester United rarely got out of second gear in an easy 3-0 victory over Championship side Leeds United. United’s pressing limited Leeds’ chances in the first half, despite an early scare from a corner that saw a scramble in the United six yard box. Michael Owen showed once again that he has developed as a forward, dropping deeper to trying and influence play – a trait usually associated with his Bulgarian strike partner. JI Sung Park never stopped making forward runs, as he usually does, whilst Ryan Giggs was the best player on the park in the first half, spraying balls around and galloping across the turf like a man ten years his junior. His nutmeg and finish for the third and final goal demonstrated his superiority to all the players on the pitch and was rested at half time by Ferguson, who will no doubt have the 37 year old in the first team squad on Saturday. 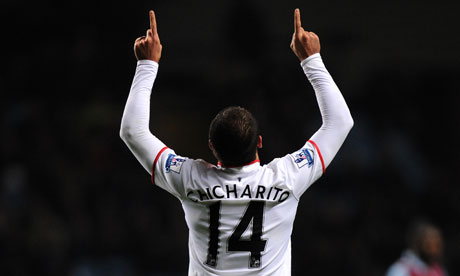 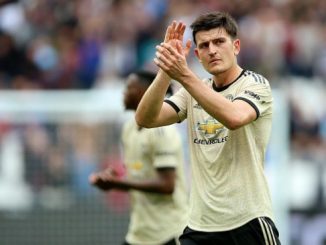