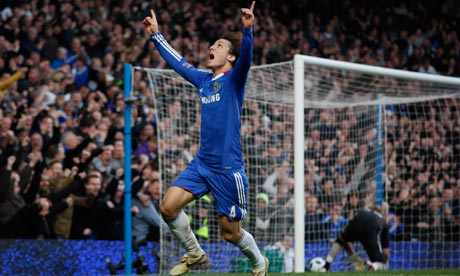 Chelsea defender David Luiz has stated that Chelsea can ‘do everything’ this season and are hot on the heels of league leaders Manchester United. Luiz scored in the 2-0 victory over Manchester City yesterday and believes that Chelsea can catch United in the league and knock them out of the European Cup (a tie that Luiz is ineligible for). The Brazilian defender has been a hit at Stamford Bridge since signing from Benfica (for £25million) in the January transfer window – although was very lucky to remain on the field following an altercation with Wayne Rooney when United lost 2-1 earlier in the month.

United face Chelsea three times in the space of a little over a month with the first leg of the Champions League quarter final tie on 6th April, with the second leg the following week on 12th April. Chelsea then travel to United on May 7th, in what could be a title deciding game. Luiz believes that there are still plenty of points to pay for and that Chelsea can still win the Premier League title:

“We want to do everything this season. We want to catch United in the Premier League and beat them in the Champions League. We have to believe – we can win the title. There are still many games and a lot of points to play for. I can’t play in the Champions League because I am cup-tied but I am very close to the team. The happiness of my team-mates will be my happiness if they do well.”

There is no doubt that with only eight games left (for United) anything can happen, however – United have destiny in their own hands and welcome Chelsea to Old Trafford in early May. United have lost the last three games against Chelsea in the league, and it is arguable that United deserved to get something out of at least two of them. The infamous Drogba offside goal is still clear in the memory and after the fallout following the 2-1 defeat early March means that United should be more than ready for the challenge over the next few weeks.

5 Comments on David Luiz: “We can catch United”