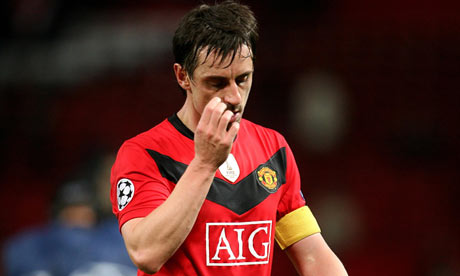 Reports are suggesting the Gary Neville is set to retire at the end of the season. Neville hasn’t been a regular in the side since his 2007 injury in a match against Bolton Wanderers. Wes Brown, John O’Shea and more recently Brazilian Rafael have all featured ahead of United’s former captain. Neville has featured in both away wins so far this season, however was lucky to remain on the pitch in both matches.

Neville has reportedly, according to Goal.com, told friends he does not want to play for another club and would like to take on a coaching role at Old Trafford after he ends his 19-year playing career in the summer.

Gary Neville was part of the famous 1992 FA youth cup winning side, which helped produce other legendary players like David Beckham, Ryan Giggs, Nicky Butt and Paul Scholes. He made his debut as a substitute against Torpedo Moscow in the UEFA Cup back in the September of 1992 – the match finished as a draw. He went onto make another 601 appearances, scoring seven goals. Neville was part of the legendary Treble winning side in 1999, forming a formiddable understanding with David Beckham on the right hand side of the pitch.

Neville broke into the first team in 1994/95 and was a regular feature until that injury after a 50/50 challenge with Gary Speed four years ago. Sir Alex Ferguson believes Neville has been ‘absolute fantastic in his time at Old Trafford. Ferguson was speaking to the press last year:

“He never had the talent of Ryan Giggs or Paul Scholes but he had determination to make sure he was always in the team. He also showed that quality to come back after a year and a half out with injuries recently. At his age, it isn’t easy. But he’s been absolutely fantastic. It’s a demonstration by Gary that he’s never going to give in. He’s an amazing man.”

Gary Neville has been an superb servant to the club in his time at Old Trafford. Always wearing his heart on his sleeve, Neville has given his all for the club winning trophy after trophy. Many felt Neville would move from right back to centre half as he got older, however his lung bursting runs to provide an overlap and excellent delivery from wide areas meant he was forever to remain a right back. Neville is currently 5th in the list of all time Manchester United appearances, behind Paul Scholes, Bill Foulkes, Bobby Charlton and of course Ryan Giggs.

It may be the right time for Neville to hang up his boots, but there is no doubting the legendary service, performance and commitment of the former United captain in his time at the club. View Gary Neville season statistics 2010/11.

2 Comments on Gary Neville set to retire at the end of the season?