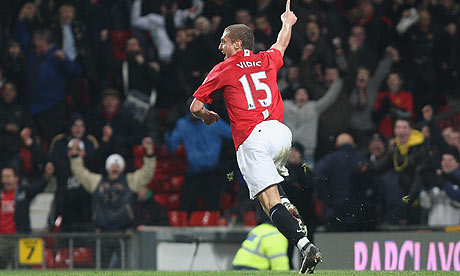 United, top of the league at Christmas, kick off the festive fixture schedule at home to Sunderland on Boxing Day. Sunderland themselves are performing well in the league and sit in 6th place, level on points with Spurs in 5th. We welcome back former captain, Steve Bruce, and his side for what should be a potentially tricky game.

There’s little doubt that few people would have predicted that coming Christmas, Sunderland would be sitting in 6th place. Maybe only the most optimistic of fans would have dreamed this up. Then again, many would predict Sunderland shouldn’t be there based on who should be there – the reality is, Sunderland have spent a lot of money and are always seemingly prepared to spend more…maybe this is less of a surprise than it looks at first.

It’s hard to say exactly how Sunderland play. Their game is as much about power and strength as it is about quick counter attacking football. The infamous 3-0 win at Chelsea was an example of both those elements. It’s fair to say they bullied Chelsea that day but also cut them open with quick, decisive passing and counter attacking. They’re aren’t a team who are too prepared to just sit back, rather, if they will try and play for a draw, they’ll still attempt to push on in a game and have a go. Like every single team in the league though, they lack consistency.

Sunderland’s foundation for success lies in their home form – 9 played, 5 won and 4 drawn…no defeats. Their away form is ok, it’s not great but it’s above average in the league. With one defeat in their last six games – a surprise defeat at Wolves – Sunderland are in fact 5th in the form league. They come to Old Trafford unbeaten in three games – three games in which they’ve also kept three clean sheets. Confidence is high, morale is high and I believe Sunderland will be coming to Old Trafford to cause an upset.

With regards to the Sunderland squad, there are some big problems ahead of this game. Captain Lee Cattermole is suspended, in-form striker Danny Welbeck is ineligible (fortunately) to face his parent club. Mensah, Bramble and Turner are all injured leave the centre back area looking thin. Meyler is a doubt after picking up a knock following his recent return from a long lay off, and former Red, Fraizer Campbell remains a long-term absentee with Reid and Kilgallon. It means that Da Silva will have to be partnered by one of Angeleri, Onuoha or Bardsley – all naturally full backs. I expect that Sunderland may only play one up top, they travel with only Bent and Gyan as recognised strikers whilst any one of Henderson, Malbranque or Zenden will be able to push on and support a lone front man from a midfield 5.

What Sunderland lack in playing personnel at the moment, they have in spirit and belief. United will have to be ever aware of Darren Bent who likes scoring against the Reds, whilst new recruit Asamoah Gyan has been a very impressive buy and will no doubt want to impress on a big stage. Jordan Henderson is of course the one player who most Reds will be closely watching – he has been strongly linked with the a move to United for a few months now and no doubt fans will wish to run the rule over him (and of course put him down should he not excel beyond imagination!).

This starts a tough run for Sunderland, 5 games in three busy weeks, but after this fixture, the next four in the run-up to the derby against Newcastle all look very winnable. Hopefully Steve Bruce will be in the festive spirit and his team will roll over for United (that is a joke before people claim that our ex-players always try to do us a favour!).

Enough on Sunderland…onto United and my predicted line up: It seems strange that the last game played was way back against Arsenal. By Sunday, United will have nearly had a two week break from football. I think we will witness a return to the 4-4-2 formation for Sunderland.

First up, O’Shea, Scholes, Valencia and Hargreaves are injured whilst Lindegaard cannot be registered yet. Wes Brown is likely to be fit for the squad but he had a minor twinge in his calf midweek and is unlikely to be risked. I’d like to start my predicted team by mentioning Park. This will be his last game before he leaves for the Asian Cup and in recent weeks his form has been excellent. He will be a big loss for the time he is unavailable and I can only hope that Old Trafford gives him the applause he deserves on Sunday.

I’ve picked what I consider to be the strongest team available. Now United are at the top of the table, that’s where they have to remain. With it so tight at the moment, now is not the time for squad rotation. The back 5 pick themselves as do three of the four midfielders. The one who I am not entirely convinced about is Anderson. He had a virus last week and so either Carrick or maybe even Gibson could play if he’s not 100%. Up front Berbatov and Rooney should be reunited. It seems harsh on Chicharito at the moment given he’s done very little wrong since he joined but he can’t seem to get a game anywhere. There could be a return to the team for Michael Owen – he’s not played since injuring himself against Sunderland earlier in the season and now fit and having come through three weeks of intense training he could feature on the bench.

The concern for United is getting the team right baring in mind the next few fixtures. This is the time of year where games come quickly and a run of games coming up against on paper weaker opposition means points cannot be dropped now. Ultimately this run of a game every few days culminates with the FA Cup match against Liverpool. Whilst I’d prioritise the league over the FA Cup, losing to Liverpool any day in any competition is unthinkable.

Recent form shows United sitting top of the form league with three wins in the last three games – however those three games have been spread out over a month and a half. The sparsity of league games played has been down to postponements due to the weather. All is not lost though in this festive time, United are top at Christmas for the first time since 2006 and are still unbeaten in the league – the first time they’ve ever achieved that at this time of the season – there’s much to be happy about.

This fixture doesn’t bare much for Sunderland fans to be happy about. In 9 Premier League visits to Old Trafford they’ve never won (although game within seconds of doing so last year). They’ve limited United to just two draws in those fixtures and have only managed to score four goals. The two draws have come within the last four visits though. A Sunderland win at Old Trafford hasn’t happened for 42 years, a 2-1 win in May 1968 when United’s goal was scored by a certain George Best. Old Trafford has been a frustrating ground in recent years for Sunderland fans – Anton Ferdinand’s 94th-minute own goal earned United a 2-2 draw while in December 2008, Nemanja Vidic also struck in injury time to give the Red Devils a 1-0 win – they’ll hoping for no more late drama this time round.

No club has kept more clean sheets than Sunderland this season, they average one every two games. This has helped them to beat Chelsea away and a solid defence has aided holding both Liverpool and Spurs away. Sunderland can claim to be one of only two teams in the league this season who have kept Manchester United from scoring – the other is Man City. Steve Bruce of course knows a thing or two about good defending but his record against Ferguson reads P15, W0, D4, L11 – not very good.

United’s South Korean, Park has four league goals in his last four Old Trafford league games. Hopefully he can add some more as he says goodbye for a month. This game is not to taken lightly. Sunderland are depleted but they are confident. Sir Alex Ferguson described the trip to The Stadium of Light earlier this season as the hardest away game United have had. A win is paramount and I think United are starting to get into a rhythm of wins now. A good result will help carry momentum into the Birmingham match on Tuesday evening. Sorry Sunderland, but I think injuries and player unavailability will cost them as I prediction a 3-0 win for United.

You can share with us your thoughts and your favourite moments from games at home to Sunderland on our forum.

Two videos I wanted to share ahead of this game, one late late winner from Vidic and a moment of genius that no one will ever forget from The King: