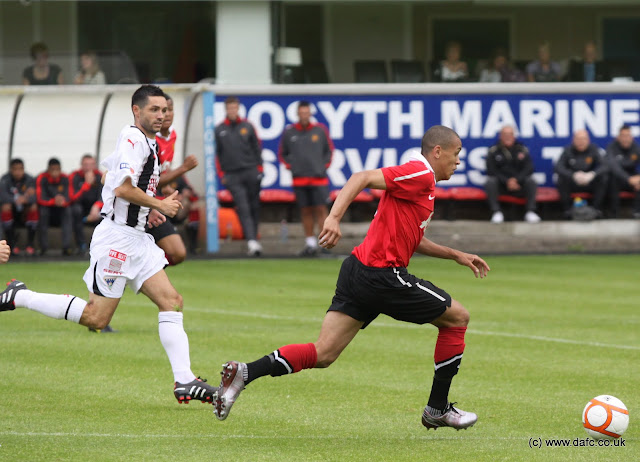 I get asked about this player more than any other. Touted at a young age as a future star by the media, the expectation on his shoulders is massive…so without further rambling, here’s Ravel Morrison…

Background – Morrison was born in Wythenshawe but grew up in Longsight, in South Manchester. A notoriously rough area it seems to have had an effect on Ravel’s attitude as I will explain later. He signed a professional contract with the club on his 17th birthday after impressing as a schoolboy. This underlines the huge potential the many believe he has. He shot to prominence amongst many fans in November 2008 when as a 15 year old he shone in the Academy’s FA Youth Cup third round defeat at home to Chelsea – the Daily Mail chose to single his performance out after the game. However he had already made an impression in the Nike Premier Cup that summer and had scored in the league for the U18s against Bolton a few weeks earlier.

Position – Ravel is a midfielder. It’s hard to define what position he specifically plays in though. He can play through the middle, on either wing, behind the striker or he can sit deep. I believe that his style of play makes him best suited to playing as one of three in the middle of a 4-5-1. He likes to roam and float around. He is notoriously hard to mark as he tends to pull opposition players out of position. Due to the freedom he likes to have he is reliant upon other midfielders doing a lot more work to fill in gaps that he has vacated.

Strengths – This might be a fairly long section…his obvious strength is his style of play. He is very unique. He possesses skills but he enjoys teasing opposition players by giving them half a chance to get close or win the ball. He is quick but has a very handy sudden burst of pace that he uses to skip away from players having drawn them in with his lazy style. He plays with a very nonchalant attitude, he rarely looks like he is in a hurry but he is able to spring counter attacks so quickly. These strange factors put together make him unique to watch and a nightmare to play against. Of the more basic footballing skills, he excels when it comes to passing. He has a superb range and plays with his head up often trying balls that don’t appear to be possible. He’s always looking and calling for the ball so he can control the tempo of the game. He’s not afraid to shoot and has found the net from long range on a few occasions. Although he sits deep he times his runs into the opposition penalty area very well and is particularly good at halting a run to find space just on the edge of the area. Finally he has a good physique. He is still young and will have a lot of physical development to go but over the summer he looks to have broadened and added some muscle to his frame.

Weaknesses – This is the tricky section and I have to be careful how I go about wording this. To start with he has to work on his all round effort and tracking of players. It has been encouraging to see him start this year looking like he’s making much more of an attempt to get back and help the defence out. He has been on the edge of his own area on a few occasions to clear the ball away. My only other major criticism of his game is that I feel he sometimes takes too many touches and can hold on to the ball for too long. His passing can be a bit short and he has been known to play a pass that leaves his teammates in trouble. Now the hard part – his attitude. Ravel’s all round attitude to life on and off the pitch has been a topic for much discussion and concern. As part of the schoolboy team and in his first year of being a scholar his commitment to playing football was in doubt. It seemed for a long time that he was mixing with the wrong people off the pitch. This peaked when he was in a car that had a gun and drugs in it that was pulled over by the police. He is often named by his teammates as being lazy in training, Robbie Brady when asked who the worst trainer was, said, “who is the worst trainer? I’ll say Ravel Morrison. When he’s on his game he’s quality. But I reckon it’s just when he fancies it!” – this lack of motivation is a real concern and he was seemingly dropped for long periods of the 09/10 Academy season. It took until March of 2010 for him to put a run of games together. It’s good to see he has finally deleted his Facebook page – hopefully a sign of maturity – his pictures revealed someone who had his mind somewhere other than football. Whilst this is a harsh criticism of a boy, a teenager growing up; if you want to become a professional footballer then you have to take it seriously if you’re lucky enough to be in the academy of a good football club.

Player comparison – This is tough as I’ve already pointed out he has a unique style. Someone like Paul Gascoigne or David Ginola come to mind when I think of the style in which they would tease opposition footballers but in terms of all round game (and I know this may sound very very silly) but he’s a bit like Kaka – not so much for the skills but for the way he glides about and passes the ball about with ease, always in full control. Don’t read too much into that comparison at all though, as I said, it’s hard to think of someone in the game who plays like him.

Present -Morrison ended last year with a good run of games in the Academy and he played well. Whilst he’s still technically only a second year scholar (even though he’s signed pro) I was hoping to see him pushed on this year to the Reserves. He was rewarded with a key role for the reserves in pre-season and he seemed to relish the added responsibility. His noticeable change in attitude has been rewarded with a more permanent promotion to Solskjaer’s starting XI on a regular basis now. When fit he has started every game for the Reserves this season, playing mainly in a midfield three with Eikrem and C.Evans. He recently had a small injury and dropped down to the Academy for their game against City. That midfield three partnership in the reserves hold a lot of responsibility and whilst Evans and Eikrem in particular have been superb, Morrison has not held back either. His performances have merely stressed how he is too good for Academy football; in fact he seems to find Reserves football very easy as well.

Bizarre Fact – Paddy Crerand can never pronounce his name properly when commentating. He’s usually referred to as “Raphael Morrison”. As that’s not that interesting, I thought I’d share various things that have been said in the media. Very few young footballers have had as much mentions as him at such a young age. Almost a year ago Henry Winter mentioned him as a future star of English football; in January of this year he was singled out as one to watch by the Independent; only a few weeks ago the Independent again mentioned him in an interview with Noel Blake, the England U19s coach; finally even his fellow United pros have touted him as something special, Wes Brown being the latest only a few weeks ago in an interview with Caught Offside.

Watch from 3mins 20secs here and look out for a ridiculous piece of skill on the near touchline:

Prediction – There is no doubting Ravel Morrison is one of the biggest talents at the club. In terms of natural ability he’s at the top. A lot will depend on whether he can keep up his new attitude that he has shown at the start of this season. He is almost too good for Reserve football already but he is too young and has too much physical development to go to be considered for a loan. Some people have suggested that he may even force his way into first team action via the Carling Cup by the end of the season. That seems a real long shot but if he continues in his current manner, first team football will happen for him. He’s been out of the international scene for a little while as his attitude was considered too much of a risk in terms of disrupting the atmosphere but I would expect to see him called up to the England U19s soon – his problem is that he is fighting with Jonjo Shelvey, John Bostock and Josh McEachran for a position, all of whom are top talents in their own rights. Of course, one age category up is also Jack Wilshere, so there are five technically gifted central midfielders for England to manage in the future – a new Lampard/Gerrard problem awaits. That’s not our problem though, we should be delighted that he’s on our books and is making fantastic strides at the moment. Keep an eye on this one, he’s something special!