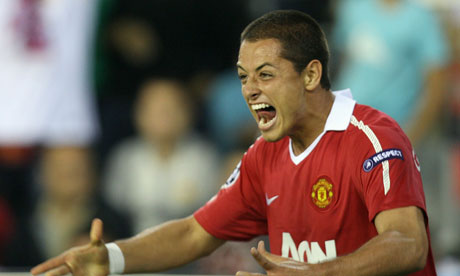 Javier Hernandez came off the bench to score the crucial late, late goal that gave Manchester United all three points in Valencia. On paper it was the trickiest tie in the group but in truth the visitors navigated the fixture with a degree of comfort.

Rafael, Rio Ferdinand, Michael Carrick and Anderson were all given recalls to the starting line up as several big names were left at home through injury and rotation.

United’s previous Champions League visits to the Mestalla Stadium had both finished goalless and both sides looked perfectly comfortable settling for the same result this time round, too. Pablo looked most likely to provide a breakthrough for the hosts with a number of telling crosses and flashed finishes across goal while the Red Devils first real attempt was a Berbatov effort ten minutes after the break.

The 4-5-1 formation adopted by Sir Alex was extremely effective with the tireless Anderson making a very clear statement and Ferdinand looking as if he had never been away. The Brazilian midfielder was probably United’s best player but after exhausting himself, was replaced by Chicharito with just 14 minutes left.

In a 4-4-2, United began to open up the game, and it was the Mexican who came the closest yet to a goal on the 84th minute when he reached at stretch to push a Nani cross onto the post. Within the next 60 seconds, United had replaced Dimitar Berbatov with Kiko Macheda and the Italian teenager had assisted the only goal. Brilliant right flank movement by Nani resulted with Macheda finding the ball – Kiko shifted the ball inside, and Hernandez fashioned space with his body before brilliantly converting with his left foot from 16 yards.

United saw the game through with little difficulty; the worst moment being an unsavoury and unnecessary flashpoint when veteran goalkeeper Cesar threw a punch at the teenager Macheda, but was completely unpunished. The Red Devils were able to achieve just their second win in Spain this century with little discomfort and propelled themselves into a position of strength in their group.