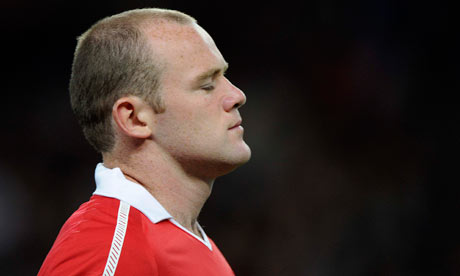 Sir Alex Ferguson revealed at today’s press conference that Wayne Rooney will not travel to Spain to face Valencia on Wednesday night following an ankle injury in the 2-2 draw with Bolton Wanderers at the weekend. Many Reds believe that a break from the pitch is exactly what Wayne Rooney needs following trouble in his private life. Ferguson confirmed that it is not the same ankle that Rooney went over on in the 2-1 defeat to Bayern Munich last March.

Kevin Keegan spoke on Sunday about the striker lacking confidence in front of goal due to the issues surrounding his private life, whilst the Daily Mirror linked Rooney with a laughable move away from Old Trafford to Barcelona. Manchester United assistant manager, Mike Phelan, believed that Rooney would be fit to face the La Liga leaders following the disappointing draw with Bolton, however Sir Alex Ferguson revealed today that the injury was a little more serious:

“It will be two to three weeks. But it depends because Wayne has done quite well with his recovery from injury in the past. It is a straightforward ankle injury. And it is not the same one he did in Munich.”

United are also missing Ryan Giggs (hamstring) and Paul Scholes (calf) due to a injuries, but could welcome back Michael Carrick following a spell on the sidelines. United have only scored one goal against Valencia in Spain, although that was back in 1982 in the UEFA cup and in the Luis Casanova stadium, now known as the Mestella – the home of Los Che. United have played Valencia six times, winning once, losing once and drawing the remaining four game. You can read more on our Valencia Vs. Manchester United preview here.

2 Comments on Wayne Rooney injury news: Striker out for 2 to 3 weeks