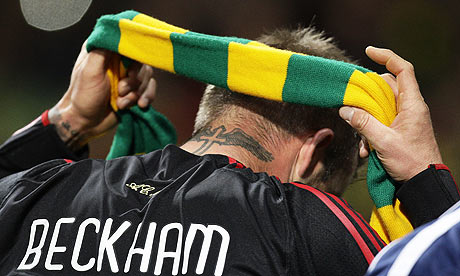 Anyone that reads this blog on a regular basis will know and understand what a Fergie supporter I am, however I think we all agree that we do not believe him one bit when he speaks about the lack of quality/value in the transfer market. Today, we’ve seen Barcelona snap up Spanish forward David Villa for a cool £34Million, whereas Manchester City have placed a £20Million bid for Manchester United target James Milner of Aston Villa – whereas Chief Executive David Gill believe United have already done the majority of their spending, with the signings of virtual unknowns Chris Smalling and Javier Hernandez. This has all coincided with the news that the PIK loan that the Glazer family took out in 2006 – will increase by £75million. No market value, or the real reason – no money to spend as United are funding the Glazer greed?

So we’ve been linked with Luka Modric, Karim Benzema, Jack Rodwell, James Milner and Angel Di Maria. As much as I like to think of all the player in the world that I would love to see at Old Trafford, lets get real, we are no longer a club that can purchase a Wayne Rooney for £30 Million – we are now looking at resale value and deals to help balance the book. Why are we balancing the books? To be a safe and well run club? Total nonsense. We are over £700million in debt, which is rising year on year and the only people we are funding are the Glazer family. As much as i’d like to think we could sign these players to make us stronger next season for a potential title challenge, the reality is we are falling behind.

Ferguson has a difficult job, because he had been at the club nearly nineteen years prior to the take over in 2005. He has invested too much time, effort and passion to throw it all away and I, even if some other Reds do not, understand that. With his decision to operate under the Glazer family, he obviously will not come out and do a Rafa Benitez (although that is ironic considering he is the one who spent it all!) and blame the lack of funds to be able to purchase new blood. No, he has to state that he doesn’t believe there is value in the market – which make him look foolish, considering even us amateurs know there is. Where is the £80million Ronaldo money? Why is that not being invested back into the club? What is going on should be illegal.

The latest hefty interest rate rise of 2% to16.25 per cent (as of August) came about after United broke financial rules governing the loan. This is where the extra £75million interest comes into play, so looks like we’ll have £5million left over from the Ronaldo money. News also emerged that the Red Knights bid is looking increasingly doomed as a number of key players are becoming disaffected and are losing hope of persuading the Glazer family to relinquish power at Old Trafford. So all in all a pretty bad day if you’re a Red. The negativity comes from the apparent over-pricing of the club by the Glazer family, who are obviously content on making as much money as they can in anything they do, and a bid would only be submitted to ‘save face’, which would inevitably be turned down. The comes after mysterious reports that the Glazer family rejected a £1.5Billion offer for Manchester United from the far East.

David Gill obviously doesn’t see a problem with the lack of transfer activity or commitment:

“Hernandez and Smalling are signings we’ve already made and the other point to bear in mind is that the Premier League is bringing in squad limits next year of 25, which we clearly operate in European competitions but is now coming to the Premier League. There will be unlimited under-21s and other rules and we’ll be taking all that into consideration.”

I’ve made my feelings on Gill known in the past, which was met by mixed reaction. But the whole head in the sand attitude and Chinese government stance if you say anything negative about the Glazer family is laughable. You just have to look at the reports of long serving stewards losing their jobs because they are sticking up for what they believe in. Where is the fairness in that? Gill once famously said “debt is the road to ruin” – so where does he stand on that viewpoint now?

Anyways, Fergie’s comments are below, and if I am perfectly honest – we could lose more players than we bring in this summer. Expect Macheda, Welbeck and Gibson to be thrust forward even more next term: