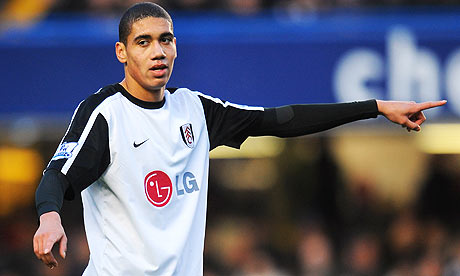 Manchester United have confirmed the signing of 20 year old centre half Chris Smalling from Fulham for a reported £8million fee. Smalling had been the pursued by Arsenal manager Arsene Wenger, however the defender will join the Champions in the summer ready for the 2010/11 season.

The signing of the England U21 International could be an indication that Nemanja Vidic will leave the club in the summer. There have been numerous reports linking the Serb with a move to Spain, with Barcelona or Real Madrid as the likely destination. Smalling has made eight appearances so far this season for Fulham and was an unused substitute in the 3-0 defeat to Fulham in December.

“Manchester United has agreed terms for the transfer of Chris Smalling from Fulham. Chris has agreed personal terms with the club and will join for the beginning of the 2010/2011 campaign. He will remain at Fulham until the end of the current season.”