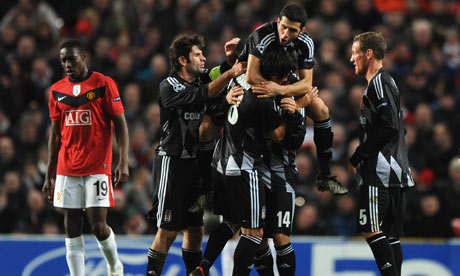 Twice consecutive finalists Manchester United suffered a humiliating defeat at Old Trafford to Turkish side Besiktas after conceding a deflected goal – throwing more than a slight comparison to their first ever defeat at home in European competition against opposition from the same country.

A line up that resembled more Carling Cup than Champions League played some wonderful football in the early minutes after being encouraged by Sir Alex Ferguson to try and make their mark by “expressing themselves”.

Ji Sung Park, Darron Gibson twice, and Federico Macheda heeded those words with attempts from outside of the area that all went close enough to trouble experienced stopper Rustu Recber, while inbetween those long rangers Nemanja Vidic horribly miscued a header he should at least have got on target.

With speculative efforts the theme of the moment, Besiktas stunned Old Trafford by taking the lead when Tellos punt from 30 yards took a slight deflection off Rafael to beat the helpless Foster. The goal stunted the confidence of the United youngsters who only fashioned one real opportunity in the remainder of the first half, an Obertan shot well saved after a brilliant move, while their Turkish visitors almost two up by the break when Fink’s effort scuffed the outside of the post.

The second half response from the homeside barely deserved a draw even if Besiktas offered very little in the way of being an attacking force – as was their want, being in the lead – and perhaps the responsibility of the most humiliating night in the clubs European history was too daunting for the second string forward line Ferguson had put out, showing only Obertan’s header from Macheda’s cross that hit the top of the net the best they had to offer until the dying minutes.

With 5 minutes to go Evra was blatantly fouled in the area but the referee didn’t give it, sparking a brief late flurry – and Anderson’ s brilliant late invention almost rescued a point but Macheda’s header from his cross was excellently saved, and from the resultant corner another Rustu athletic save denied Wes Brown, as the visiting keeper exploited every opportunity to waste time.

As disappointing as the result was it is difficult to be too harsh on the youngsters who were faced with the responsibility, though on this evidence it is apparent that there is a lot left for them to learn.