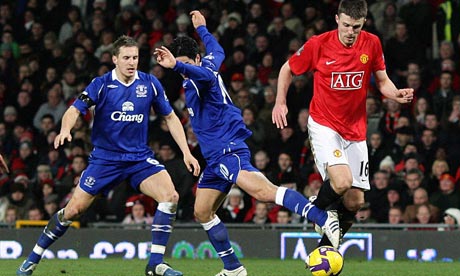 When it comes to a “Big Four” in England historically speaking Everton are the club that join United, Arsenal and their city rivals Liverpool, with 9 league titles, 5 FA Cups and a European Cup Winners Cup to boot.

The Toffees visit Old Trafford this weekend in the second part of a clash between the city’s teams as Liverpool host City earlier in the day – and unlike the frostier relationship that exists with their neighbours, there always seems to be a healthy respect between the Merseyside blues and the Manchester reds, even if that cordial relationship suffered somewhat during the transfer of Wayne Rooney.

Still, Everton too have been the beneficiary of transfers between the clubs down the years, with their current club captain Phil Neville still the most domestically decorated player outside of Old Trafford, while it’s hard to believe that when signing Andrei Kanchelskis 14 years ago Everton were tipped to overtake the United side who were famously told their kids would win nothing.

Stretford-End.com takes a look back on 5 classic Premier League bouts between the two North West teams.

The Red Devils first home Premier League game was mercilessly ruined as Everton destroyed them with goals from Peter Beardsley, Robert Warzycha and Mo Johnston. Despite such a positive early season result Everton had a stuttering season and finished in 13th – United meanwhile recovered from an unlikely start to win their first league title for 26 years.

The first game for United after the death of Sir Matt Busby saw a performance that was a great nod to the philosophy of the former manager, as the Champions peppered their visitors with a relentless barrage of shots only to find Neville Southall, as usual, in stunning form. It was fitting that it was the first of “Fergie’s fledgings”, Ryan Giggs, who secured the win with a fine header.

Only in this Manchester United team could one of their front four score 4 goals and then not start the next two matches. Ole Gunnar Solskjaer put the Toffees to the sword with this one man show while Denis Irwin got in on the act with a penalty.

As false dawns go this was pretty impressive – a resounding win that was orchestrated by the wizardry of Seba Veron with a fine goal from the Argentinian being the highlight of a game that included strikes from Andy Cole, Quinton Fortune and a late strike from David Beckham. United went on to lose 6 of their next 11 league games to blunt any realistic hopes of being the first team to win the league four times in a row. Mind you, with Fortune and Luke Chadwick as United’s “wizards” on the wing, it was no surprise.

From false dawns to false reflections – a staggeringly harsh scoreline on a resolute Everton team who, with a wet behind the ears Wayne Rooney, came close to inflicting a reverse against United. With just 4 minutes Paul Scholes took centre stage and struck a cruel blow by scoring the winner at the Stretford End. Worse was to follow for the visitors as Ruud van Nistelrooy converted a penalty and their woes were compounded further still when Scholes struck spectacularly in off the bar in stoppage time.

Still, there was plenty to admire about David Moyes’ as then new approach to his job – clearly an opinion shared by the boardroom at Goodison as in the seven years since Moyes has established himself as one of the league’s top managers and completely transformed the club from one that was facing financial ruin to one that regularly finishes in the top 6 and, on last season’s showings, ready to challenge for silverware.