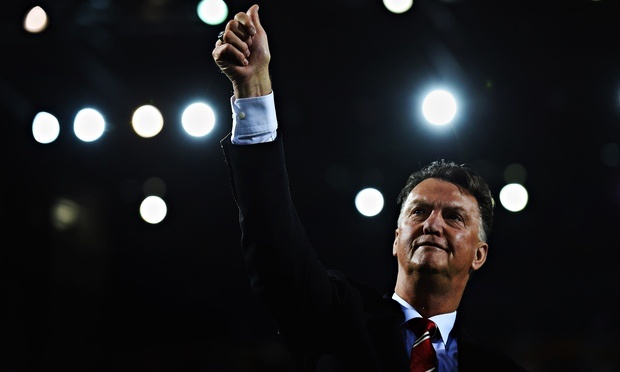 It’s been a year of no trophies and high drama for Manchester United. Comings, goings, spending, criticism and philosophies. For fans of a certain age, it has been an eye opener and a year that won’t be forgotten quickly.

There is really only one place to start. David Moyes’ United opened the year with 4 defeats in 5 games and went out of the FA Cup in the 3rd Round to Swansea, and then calamitously lost a Capital One Cup semi-final against Sunderland on penalties. Just the 9 wins in 22 games only told half the story – it was the manner of the defeats at home to Liverpool and Man City, away to Olympiakos and fatefully, Everton that ultimately saw the axe wielded.

There were few highs. Rooney’s halfway line goal at West Ham; van Persie’s hat-trick against Olympiakos; a rare accomplished performance at Newcastle; and the two legs against Bayern Munich which gave us a brilliant Old Trafford atmosphere and that Evra goal. We’re scraping the barrel though. These were hardly highs, just moments that weren’t quite as bad as everything else that was going on.

David Moyes, despite not being everyone’s ideal choice of manager, had received the backing of Old Trafford and beyond early into the new year but March was to be a fateful month. His name was no longer sung and although there was never widespread booing the atmosphere became tense – it was clear that faith in Moyes had waned and the vast majority now doubted him.

Many will feel that it ended in an unprofessional manner and that Moyes was ultimately treated with a lack of respect. That everyone seemed to know he’d been sacked before him was appalling and the bitterness that exists now between Moyes and the club should have been an avoidable outcome. He is a good man and will hopefully be successful again but his spell at United is a black stain on United’s history.

On 26th April 2014, 75,208 of us were privileged to see a Manchester United side managed by Ryan Giggs with Paul Scholes, Nicky Butt and Phil Neville as his assistants. There is now a great deal of cynicism attached to this group because of the commercialisation of the Class of ’92 and various things they’ve said in the media but there’s absolutely no doubt this was a special moment. As a cluster of players, few have come close to influencing the club like them and to see them together in the dugout was, potentially, a one-off that may never be repeated. Four local (ish) lads who loved the club, a memory to treasure.

It wasn’t too surprising that Giggs called it a day. David Moyes had lessened his role in the squad and with ambitions of being a manager, his time was up. On reflection, it’s been a seamless move to the backroom staff and maybe the lack of celebration of Giggs’ playing career is fitting. United don’t really do big fanfares; with the exception of Alex Ferguson’s retirement at the Swansea game, it’s only really been at testimonials that we’ve made a big deal out of other figures moving on.

I thought it would be stranger to see a United side without him but actually it’s not been that odd. In years to come he’ll probably be remembered as United’s greatest. There have been better players and some might argue that Giggs was rarely in the “world class” bracket but playing at the top for so long with at least one reinvention is not to be scoffed at. For me, he was best as that lightning quick winger in the early 90s, an extraordinary talent that went on to win the lot. In case it was overlooked with all that’s gone on this year, thanks Ryan.

Giggs wasn’t the only person we said goodbye to. The United squad has probably never had such a drastic overhaul in one year. Between Ferdinand, Vidic, Evra and Giggs, United lost 2,097 appearances and countless trophies as well as three of the finest defenders to ever wear the club’s colours. By contrast two of the more comical players also departed; Buttner and Bebe represent two of Alex Ferguson’s stranger decisions. The Kagawa experiment ultimately failed and we also thanked Macheda for his 2008/09 contribution.

One of the more disappointing departures was the sale of Danny Welbeck to Arsenal. His record so far at Arsenal justifies van Gaal’s belief that Welbeck couldn’t have been a leading goalscorer at United but I still believe he had a role to play. A Mancunian United fan who adored the club and was popular; who worked hard for his team; and came through the Academy. His sale was hard to stomach and along with the loaning of Cleverley raised questions about United’s Academy and indeed commitment to youth.

The man challenged with returning United to a more stable condition was the enigmatic Dutchman, Louis van Gaal. A gentleman’s agreement with Spurs was broken as soon as he heard of United’s interest and he was supposedly lined up as early as February (another poor piece of professionalism by United given that this was leaked whilst Moyes was still in charge).

His World Cup success with Holland coupled with his unique approach to the media restored some confidence to the fans and seemingly, the players. Although his ‘philosophy’ isn’t quite clear, his assertiveness and decision making whilst juggling a never-ending injury nightmare has brought some calm to the club. The players appear happy again and there is fight and passion on the pitch. Wherever he’s been he’s had success and there is growing momentum at United now. Top 4 is surely attainable this season and then beyond that we can at last dream again.

To reach the position we’re in has required a different approach from the owners. In the calendar year United have spent about £180m and can at last, after years of under-investment, say they’re competing with the wealthiest clubs for the best talents again. Seeing a team with Juan Mata, Falcao and di Maria in it is still surreal but since the sale of Ronaldo it’s what the club has needed. Star quality, managed the right way improves everyone. United have always been big spenders thanks to a well-maintained sponsorship model but whilst Chelsea and Man City took strides to move ahead of us, we now appear ready to match and maybe better them.

There was a fear, thanks mainly to the media and bitter ex-staff, that all the spending and the sales of our own produced players would see an end to United’s commitment to their Academy. As the year comes to an end, we can safely say it’s been one of the most successful for the Academy in our history. There have been debuts for Tom Lawrence, James Wilson, Patrick McNair, Reece James, Tyler Blackett, Saidy Janko, Jesse Lingard, Tom Thorpe and Andreas Pereira. On top of that, Januzaj continues to be involved whilst Michael Keane and Marnick Vermijl have come back into the team at various points.

These players and the faith shown in them has helped to make 2014 a year we can be proud of. Our traditions remain in place. Every group of young players will always be marked against the ’92 group but that’s unfair; they were a freak occurrence. Recent research shows how excellent our Academy remains at producing players for the top leagues and it’s only right that it’s heralded rather than questioned.

Although it’s perfectly feasible that 2015 will be a second consecutive year without silverware, United’s current trajectory means that we should continue to see improvements in various aspects of the club. European football will hopefully be secured and an FA Cup run will be welcomed. More signings and sales are expected as van Gaal’s United takes shape.

The last 12 months have seen us experience some of our darkest days for a long time but at last we are climbing towards the top again. The atmosphere at the club, Old Trafford and amongst the fans could not be more different from this time last year. We are once again optimistic, bullish, arrogant and maybe in some quarters, even feared. Happy new year everyone!