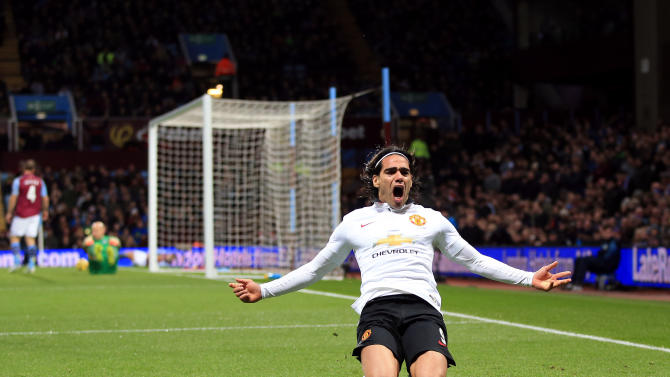 Radamel Falcao scored a lovely headed equaliser, but United failed to push on from there.

United’s six-match winning streak was ended at one of their happiest hunting grounds, following a tenacious display from the home side, led by the dangerous Christian Benteke. Villa also had Gabriel Agbonlahor sent off – very harshly in the opinion of most observers – yet they defended resolutely, and United failed to push on after the numerical advantage presented itself. In the end, a point each is a fair reflection of the play, but Louis van Gaal’s side must see it as a missed opportunity to add to their growing yuletide momentum. We’ll discuss some of the main talking points from the game here, and as always we look forward to comments from both sets of fans.

In many respects, United played with greater authority than they had during the recent away victories as Arsenal and Southampton. This may have been due to the quality of the opposition but, regardless, United dominated possession in the manner that they have been doing at Old Trafford in recent months but have struggled to do on the road. Despite this, they left Villa Park with a disappointing draw and two points dropped. United have certainly ridden their luck away from home in their victories over Arsenal and Southampton but, to a certain degree, you make your own luck. For example, having players capable of taking half-chances in big games is not luck; just as Chelsea and City don’t rely on luck when the likes of Costa or Agüero score – that is their function.

The difference at Villa was, ultimately, a failure to take the chances that came United’s way; Van Persie had 2 good chances and 2 half chances but failed to score and Falcao had a half chance after his goal that he mishit. In total, United had 9 shots on target, to compare to the 2 shots on target that they had in each of their last three away games against City, Arsenal and Southampton. Had Van Persie connected properly with his chance in the opening minutes of the match, United may have been able to enjoy a more comfortable afternoon.

I have to admit, I’ve always been sceptical of the argument that Rooney will begin to play a deeper, midfield role as he enters the twilight of his career. I’ve always been of the belief that his strongest position is as a goal-scoring centre forward and that scoring rather than creating goals is his forte. Despite this, it has to be said that Rooney gave another convincing performance in midfield, continuing at the level displayed against Liverpool. He spread the ball well and brought both Valencia and Young into the game frequently and had to be on the top of his game in the first half to ensure that United had any kind of presence in midfield, given the poor performance from Darren Fletcher.

Given Van Persie’s renaissance and the potential goal power if Falcao can retain match fitness, it would appear that Rooney may well become a permanent fixture in United’s midfield. This would allow Di Maria to play centrally behind the two strikers, with Mata probably becoming the fall guy again.

United have tended to play under Van Gaal using either a 3-5-2 or a 4-1-2-1-2 (or 4-4-2 diamond) and the re-emergence of the 3-5-2 this season hasn’t been exclusive to United either, with many Premier League teams using the formation. In these days of attacking full backs and a holding midfielder, however, I often think to myself that there is very little difference between the two formations and certainly not to a level whereby too greater significance should be placed on it. This is especially the case when United use a player like Michael Carrick at the centre of the three ‘centre-backs’. When Carrick is used in that position, the only real difference to the more orthodox 4-1-2-1-2, is that the holding midfielder’s starting position is deeper, with the two centre backs spread further apart. When you think about it, that isn’t a particularly huge transformation.

I’m sure many will point at United’s 3-5-2 formation as being the reason why United struggled and that Carrick should be played in central midfield, given he is our best midfielder. I’d agree that Carrick should have started yesterday in midfield, however, that was primarily due to the performance from Fletcher; had Fellaini or Herrera been fit then I don’t think Carrick would have needed to be pushed forward in the second half. Bear in mind, as well, that Villa looked far more threatening in the second half, even with ten men, and this was in part due to the absence of Carrick screening United’s defensive third. If Van Gaal has Fellaini, Herrera, Di Maria and Rooney to choose from for the two central midfield positions, I would envisage that Carrick will continue to play the deep holding role for the foreseeable future. Whether you call this a 5-3-2, a 3-5-2, a 4-4-2, a 4-1-2-1-2, a 4-3-3 or a 3-4-1-2, depends on your preference.

Falcao jumped over the moon

Hopefully Falcao’s goal will kick-start his season. It’s obvious that he has great desire to be a success and I thought his hold up play and physicality looked impressive against Villa. All being well, he should start against Newcastle on Boxing Day and this will be an excellent chance for him to improve his match sharpness and hopefully build up his confidence. If United can get him, Van Persie, Rooney and Di Maria all in the same team and playing well, then a top 3 finish and a good cup run should be a realistic objective.

During the first 70 minutes of the game, Ashley Young was United’s greatest threat from the left side, testing Guzan with a cross shot that almost crept in and then later providing a great cross to set up Falcao’s equaliser. The only downside to his performance was that the quality dipped once he was switched to the right hand side as he failed to take advantage of the room he was allowed as the game entered the last 10 minutes. It’s good to see that a player so often targeted by his own fans, play with the confidence and desire that Young has shown this season; he is, in effect, the cover at left (wing)back for Luke Shaw and he has taken to it very well.

While the decision to remove Fletcher at half time was a given, it would be fair to say that the other substitutions for United probably did more damage than good. It is easy to see why the changes were made, as Van Gaal will have hoped that Di Maria would stretch the game with his pace (and also, he will need minutes if he is to feature much over the festive period), and, once Villa went down to ten men, he would have felt Wilson could stretch the game even further and take advantage of a hopefully tiring Villa side.

Unfortunately for United, Villa defended with great tenacity and with danger on the counter attack once they were a man down and neither of United’s substitutes managed to have much impact, with Di Maria reduced to shooting from range and Wilson making largely unfound runs. In hindsight, Van Persie and Valencia may well have provided the greater threat as United were building a head of steam before the changes were made.

While the result was disappointing, United are now unbeaten in 7 and it was encouraging that, once they were behind, they took the game to Villa after half time, something that was beyond them when trailing in games last season. A home victory will be expected against Newcastle on Boxing Day and then United conclude the Christmas period with two difficult away games at Spurs and Stoke within the space of 48 hours; if United are unbeaten after those games, then they will be in a really strong position.