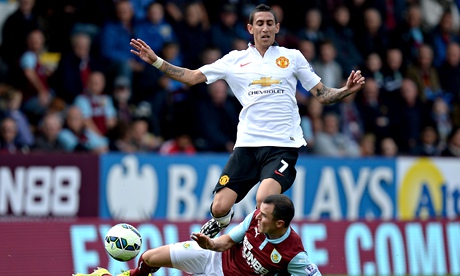 “First match, it was a loss. The second match is a draw. So maybe today it’s a victory.”

No such luck for Louis van Gaal who again leaves an away ground with two fewer points than should have been expected. Whilst the game was overshadowed by the debut of Angel di Maria, the anticipated lift of spirits seemed to fizzle early on with the defensive line at sixes and sevens and little in the way of dynamism from anyone not named Angel. Burnley were unlucky not to be a goal up early on with a free kick hitting the post and then Jonny Evans nearly gifting a goal were David de Gea not already running out to clear the ball, but United could easily have claimed two penalties in the second half as Ashley Young was pushed off the ball and Ashley Barnes of Burnley blocked the ball with his hands just a short while later.

You’ve probably heard every pundit call into question what Angel di Maria can bring to a team desperately in need of reinforcements elsewhere. The answer, on today’s performance, was a whole lot. The Argentine provided pace and intensity that has sorely been missed from the team; chasing, winning and running with balls. The passing and crossing, at times, was sublime. One particular cross in the first half landed perfectly into the path of Robin van Persie. Two years ago, the resulting shot would have led to mass celebrations from the away end, but Tom Heaton made himself big enough to save the day for Burnley.

For all the concerns about 3-5-2 and how Di Maria would play on the wings or in the #10 role, he gave central midfield the jumpstart that it needed. Though he roamed towards the left at times, the British record signing dictated pace from the back and did much of the donkey work that Darren Fletcher and Juan Mata struggled with. He’s no Arturo Vidal, but he didn’t need to be. The remotest improvement in the middle of pitch was always going to be noticed and Di Maria stood out amongst everybody. To see him substituted before the 70th minute for Anderson just highlighted how wide the gap of talent is and just how little depth United really have.

With that being said, United only looked slightly more attacking than we’re now accustomed to. There were still large chunks of the game where United were circling the perimeter of Burnley’s penalty area without any hint of penetration, on the rare occasions where they weren’t fending off the attacks in their own end. Di Maria is going to be a superstar for United, but he won’t be able to fix the van Persie-Wayne Rooney partnership; £60m can get you a lot of things but it can’t buy a miracle.

Big decisions will need to be made

Looking objectively at the game, there were few positives to United’s play. David de Gea looked like a goalkeeper thoroughly sick of mopping up after the players in front of him, coming out and making sweeper clearances more often than we’re used to seeing. Phil Jones, again putting in a man of the match performance, gave away a clumsy free kick but otherwise put in a strong performance to make up for yet another poor showing from Jonny Evans. When Danny Welbeck was subbed on late in the game, the attacking impetus seemed to pick up a little more.

The positives were few and far between. The negatives were far more scathing.

Antonio Valencia, for example, was appalling all game. Any attempt at a cross either bounced off the first man or was so wayward that even Andre The Giant wouldn’t have gotten his head to it. Ashley Young could have been awarded a penalty after being pushed off the ball, but otherwise his contributions were zero. Darren Fletcher, the big-hearted soldier that he is, simply looked like a man watching the game fly past him. Mata again seemed uncomfortable in his role, whilst Wayne Rooney and RVP continued their staggering lack of chemistry together.

The injury woes are well known and nobody can expect a second-string team to play like world beaters in every game. Luke Shaw, Rafael, Ander Herrera, Michael Carrick and the incoming Daley Blind and Marcos Rojo will replace half of today’s starting line-up. Yet, even still, a team spearheaded by Rooney and Van Persie should not be so allergic to goals as they are right now. At some point, the manager will have to make key decisions moving forward. Will 3-5-2 remain or should a 4-3-3 be implemented? Should Fletcher be dropped the second Michael Carrick returns? Can Adnan Januzaj give Mata competition in the attacking midfielder role? Will Valencia be dropped completely?

More importantly, who gets dropped up top? Van Persie and Rooney simply cannot function together in any cohesive manner. With Welbeck on the bench and James Wilson in the wings, someone has to be moved. RVP was LvG’s captain at the World Cup, but Wayne is the club captain right now. It will take a big set of balls to make that decision, but if anyone can be trusted to put their balls on their line, it certainly has to be Van Gaal.

Another injury. Just what is going on?

As if the boss didn’t need any more problems to contend with, Mata limped his way off the pitch with five minutes to go, complaining of a hamstring issue. Whilst you wouldn’t expect the Spaniard to be out for long – and with today’s performance, any absence could be considered a minor positive – Mata joins a long list of players who have fallen victim since the new manager came in.

You may be sensing a bit of déjà vu here, since David Moyes came under a lot of criticism for his intense training regime that seemed to do more damage than anything else. With tales of double-training sessions and complaints of fitness levels towards certain players, questions surely have to be raised about just what is going on at Carrington.

Of course, United are no strangers to periods of time with a number of stars out of action (often around Christmas) but the tally seems to be piling up to ridiculous numbers and, whilst a number are back in due course, it has to be worrying fans that the problems are increasing rather than decreasing. One can only wonder how damaging it would be to the team if, say, Di Maria or Jones were to drop at any moment. Depth is already a sore subject without having to field more young, inexperienced kids or uninspired fringe players. Whatever the club does, it cannot allow itself to reach the point where Anderson is a starter through necessity. It shouldn’t come to that, but it certainly could.

In an ideal world, Man Utd could have nicked a result at the end. Typically, nobody could find their feet long enough to open Burnley’s defence. As most teams seem to have sussed, ‘parking the bus’ is a perfectly effective way of curtailing a United whose once-intense, quick-paced attacking play would have ripped open any opposition. The first half was all about Di Maria and our new number 7 didn’t disappoint even when those around him did. The second half performance, same as last week, seemed more urgent and inspired but only just. Every problem that United have faced in the last twelve months still remained. The project continues…

Let us know what you think in the comments section below.