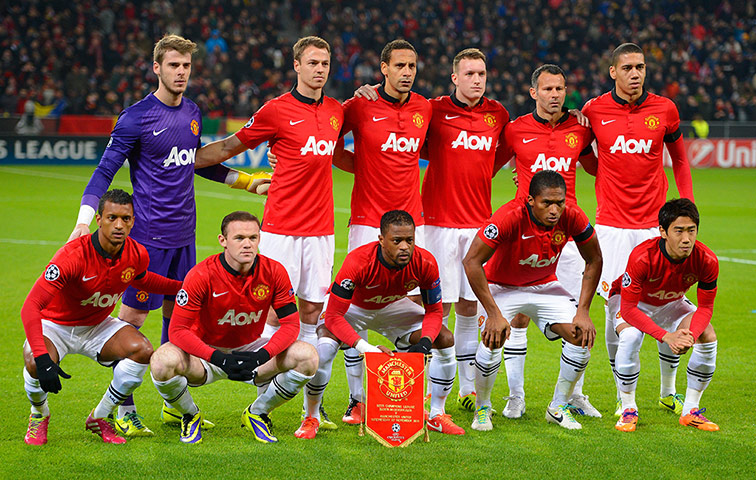 Valencia’s haka paid off, as nearly all of the starting XI performed superbly.

In what came as a massive surprise to almost everyone, Manchester United went to the BayArena and savaged hosts Bayer Leverkusen by a score of 5-0. In doing so, United qualified for the next round of the Champions League, almost certainly as group winners. After conceding another late equaliser in the 2-2 draw at Cardiff on Sunday, the team needed a good performance and result to put our restless minds at ease.

A team display
This was, by some distance, the most convincing collective performance of David Moyes’ reign. The first, fourth and fifth goals were exquisite in their construction, and a look at the goalscorers – Valencia, OG, Evans, Smalling and Nani – was evidence that United’s attacks came from all angles. There was a cohesion to United’s passing, and a purposefulness to the attacking play that has rarely been apparent in their Premier League outings. Though not a scorer himself, Wayne Rooney assisted or was heavily involved in all of the first four goals, another excellent display in what is now a pleasingly lengthy run of form. With a few wobbles at times, Rio Ferdinand was perhaps the only starting player not to perform above 7/10 on the night – otherwise United were mostly comfortable defensively, though they cannot yet be described as imperious. At 0-0 in the first half, Stefan Kießling was through on goal, before a last-ditch block by Jonny Evans and a De Gea clearance from the resulting corner set United on their way to a superb counterattacking opener.

Kagawa and Rooney
If you’re a  denizen of Twitter,  you may be familiar with the ongoing debate about Shinji Kagawa and his role in the side, whether he should play in the centre, or on the left or look at this exploding whale. Regardless, he played behind the centre-forward on Wednesday and played really rather well. Though he could still be more incisive in the final third, he did brilliantly to link the midfield and attack, keeping the ball well, displaying his exquisite close control and constantly driving the team forward on the break, from which United carried menace throughout. Kagawa and Rooney excelled as a partnership – exemplified by the combination for the fourth goal – which may prove significant for the side in future, especially if Robin van Persie continues to accumulate minor injuries. Rooney’s contribution to the game was more obvious to the statisticians. While he is some way short of the player we once expected him to be – the magnitude and variety of his abilities will be beyond the control of most defences, when he applies them consistently in this manner. Quick movement, clever interchanges with the attacking midfielders, and an excellence of set piece delivery – previously unseen until this season – were foremost on show against the German side.

Central midfield: Reliable Jones, Vintage Giggs
Much of the talk before the match centred upon United’s semi-final failure at this stadium in 2002 – in what Gary Neville called United’s least forgivable European failure of the Fergie era. Pre-match nerves were largely down to the absences in midfield, enforced by injuries to Carrick (achilles) and Fellaini (psyche, frontal cortex). Our fears were apparently misplaced, as Phil Jones and the utterly bloody incredible Ryan Giggs gave what was maybe United’s most assured central midfield performance of the season. That such a display came from a non-specialist duo – eager, plastic-faced centre-back; winger who made his United debut while his colleague was a foetus  – was jarring, it was also an excellent show of shared responsibility. For all of Leverkusen’s supine acquiescence, Jones did his work diligently, screening the back four when necessary and providing cover to the fullbacks when they ventured forward. Meanwhile, Giggsy ran the game, controlling it with long and short passes, bringing the ball upfield, spreading the play and contributing an extraordinary dose of energy to United’s attacks. His showing was rewarded with a gloriously lofted assist for Nani’s goal near the end. Like Kagawa, Giggs seems to be thriving in the European games this season. Brilliant, again.

More nice things
After about twenty minutes, I groaned about Chris Smalling’s deficiencies going forward from right-back – no fault of his own, as he’s clearly a fine young centre-back. Subsequent to that, Chris had some fun adventures in attack, contributing to the second goal (originally credited with it, before it was reclassified as an own goal), dribbling successfully, and putting the finishing touch on a magnificent fourth goal. It was just that kind of a (fun, brilliant, enjoyable to be proven wrong) match. Nani and Valencia had their best games in a long, long time, and we can only hope that this leads to some consistency from our two most influential wingers. Patrice Evra again showed his monstrous aerial presence in attack, winning the header that eventually led to Evans’ goal. As the youngsters say: this. By bringing on Alex Büttner, Anderson and Ashley Young in quick succession near the end, Mr. Moyes engaged in a truly outstanding bit of trolling, and one that can only be applauded.

Leverkusen observations
Apart from one moment in the first half, the home team’s star striker Stefan Kießling had a quiet game. Described in this piece  as ‘the German Andy Cole’ because of his lack of international caps, there was little else in common with Cole from this performance. On the right flank, Gonzalo Castro was probably their best player, but that obviously isn’t saying much. From some angles (perhaps this one?), Simon Rolfes looks a bit like the late Kenneth Williams. Bayer Leverkusen are owned by the pharmaceutical giant Bayer – inventors of aspirin, polycarbonate, and, err, heroin! The story here is really quite interesting: until World War I, the company owned the trademark for the heroin name, and the product was originally developed as “a morphine substitute for cough suppressants that did not have morphine’s addictive side-effects” (!!!) This science lark really is something else.

Conclusion
After a calamitous end to the last league game, and a drab performance in the club’s last European outing – 0-0 at Real Szzzzzzz… [apologies] – this was United’s finest away performance in Europe since they eviscerated Arsenal in the 2009 semifinal. The thorough home and away beatings of these opponents shouldn’t be taken for granted. Leverkusen are good enough to have kept pace with Guardiola’s frightening Bayern Munich side in the Bundesliga, thumped Shakhtar Donetsk earlier in this competition, and came into this game undefeated at home since March.

United are now 11 games unbeaten in all competitions, and while some of those games should’ve been wins instead of draws, decent performances are coming more frequently and more players are playing themselves into form. Mr. Moyes’ first Champions League run is going better than most expected, and Europe has been the stage where Shinji Kagawa has given his best displays of the season. Ryan Giggs continues to amaze, and several players showed excellent form at a time when key players (and Fellaini) are out. Next up in the league is a trip to White Hart Lane, where United will look to prolong Spurs’ immediate suffering and further their own aspirations.