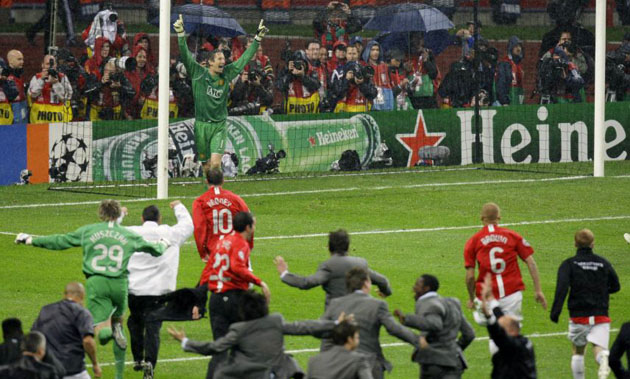 One thing I can’t stand since this blogging phenomenon came along is an angry response to an authoritative figure behind the furious bashing of a worn out keyboard. This is closely followed by the pretentious and cringeworthy open letter, which of course would be used as toilet paper by the person it is indeed intended for.

But I would like to discuss the comments by the well respect and extremely knowledgeable Brian Glanville in this month’s World Soccer – a superbly glorious historical football publication. The legendary journalist decided to focus on Sir Alex Ferguson, probably for the final time, but instead of gushing over the unprecedented era of success, Glanville has opted to concentrated on Ferguson’s handling of individuals within his profession and the 99 questions posed to the great man by Magnier and McManus.

Everyone is entitled to their opinion, that is the beauty of football. Glanville has been commentating and reporting on football for many a year and was in attendance at the 1958 World Cup, which saw a young Pele burst onto the scene. I’ve enjoyed his column in World Soccer for years, despite the grumpy nature of some pieces. He is honest and to the point and I will continue to subscribe.

However, for someone who does get lost in the Uncle Albert world of “in my day”, surely the old school, no nonsense talking man from Govan was the final figure to depart from an era we are never likely to see again? Personalities like Clough, hard disciplinarians like Herrera or revolutionists like Sacchi are hard to come by nowadays – Sir Alex Ferguson had it all in his locker. So why, for such a superb journalist, concentrate on off the field matters and relationships with the elitist over building side after side or investing in youth?

There is no doubt that Ferguson is a man to be feared if you get on the wrong side of him, no question. Stories of stubbornness, petulance and anger go back years, but without this narrow minded approach and desire, would he have been so successful in his time at Old Trafford? Despite nearly biting Patrick Barclay’s head off when being questioned about Seba Veron, the great man decided to offload the extremely gifted Argentinian for a loss of £13million, despite only arriving two season previous. Ferguson knew when he was in the wrong, but as the boss he had to always stand by his decisions.

As touched upon, Glanville often recounts of the stars of yesteryear, with one of Sir Alex’s heroes popping out now and again. Alfredo Di Stefano, was indeed one of the greatest players to ever grace a football pitch and was pivotal in Real Madrid’s five European Cup wins in the late 1950s and early 60s. He also, along with colleague David Conn who also added unnecessary caveats into his piece, questioned the two European Cup wins by Manchester United under Sir Alex – something I’m baffled with whenever I hear it branded around.

Its either mumbled by a moron or a rival fan who is still talking to his pals about his eight European Cup wins with Tranmere Rovers on Football Manager. How can winning two European Cup be said with any negative connotations? Honestly! There are a number of legendary managers that have picked up two European Cup wins such as Pep Guardiola, Jose Mourinho, Ernst Happel and Ottmar Hitzfeld. Bob Paisley is the only man to ever win three European Cups, a remarkable achievement, but there is no doubt that since 1990, the competition as we know it has changed dramatically in terms of competitiveness.

The fact that AC Milan were the last team to win back to back European Cups in 89 and 90 speaks volumes. It was indeed only Ferguson’s United that came close to matching that, losing to probably the best side of all time in Barcelona in Rome. Glanville referenced a Sunday Times article that spoke of the ‘narrow’ victories of United two recent European Cup successes. You either win something or you don’t. He goes onto compare the two victories in 2008 and 1999 with that of now lowly Nottingham Forest in 79 and 80 – a comparison I don’t think he needs to make.

If football were indeed played with the same formations, stadia and player diets – then he might have a point, but the fact that in that decade, Bayern Munich won the trophy three times, Ajax won it three times and both Liverpool and Forest shared it four times, highlights that it was far easier for teams to retain the title that it was twenty years later. The slightly smug and eyebrows raised at the ‘slim’ honours list of Ferguson’s European quest is ridiculous. Winning his first in 1999 was remarkable and the second unbelievable – feats that some fans and journalists downplay due to unrealistic expectations. We’ve only won the league this year…..

I probably speak about this quite often, but Sir Alex Ferguson once remarked that Juventus, the Old Lady, were the benchmark that United had to overcome before winning the holy grail. United’s performance in the September of 1996 was a little like the poor Tahitians against the World Champions Spain – we were battered, although the 1-0 scoreline wasn’t a true reflection of the Italian Champions dominance that night.

As time evolved and the sides paired up against each other again and again, United got closer to their Italian rivals. Lippi’s men were beaten in the 1997/98 season, with Ryan Giggs’ glorious solo run overshadowing the great Zidane and co. Ferguson’s men were growing in stature and the unbelievable 3-2 semi final win in Turin in 1999 is the best of the all. United were poor in the early part of the newly formed Champions League, but Fergie had caught up with the elite pack and beat them on their own turf.

From 1997 onwards, United were always amongst the elite, with the exception of a few seasons. In some peoples eyes, The European Cup is the pinnacle – eclipsing the romanticism of the World Cup. So why are two European Cups often used against Sir Alex Ferguson, rather than realising that feat was up there with the best of them, especially when viewed in context.

The tributes have been done and the goodbyes said. We now look to David Moyes to walk in the footsteps of the great men of the past. The purpose of this piece is not an angry rant at one of the greatest journalists this country has produced, but to suggest that his piece focused more so on Alex Ferguson the person, in his opinion, rather than the footballing man. It is ironic that an accompanying piece focuses on David Beckham, who he berates for achieving more off the pitch than on it. Perhaps if Glanville did indeed discuss issues on the pitch, we wouldn’t be talking about ‘style over substance’?

World Soccer is a superb magazine and I will, as always, continue to buy it. But I would have thought that both Ferguson articles would concentrated on his achievements, legacy and what he brought to the game, not about a race horse from 2003, his agent son and ‘lack’ of European Cups. He continued to build side after side, handling big egos and adapting with the changing footballer. From heading down the boozer in the 80s to witness legless pissed up players to Cristiano Ronaldo in his micro shorts and Rio Ferdinand tweeting pictures of him eating a Snickers bar – he saw it all and rolled with the times. Glanville. A great knowledgable journalist, but got it wrong on this occasion.

What are your thoughts on the matter?