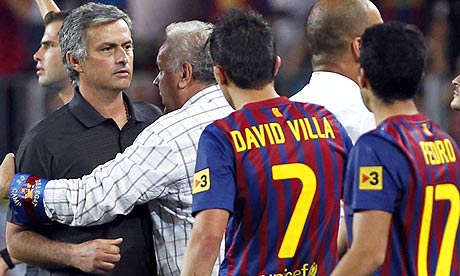 After what was another stirring ‘El Classico’ in the Camp Nou last week we are reflecting now not on a superb game of football, instead the headlines are about the mass brawl and touchline troubles that ended the game.

For two such extremely talented teams to resort to violence and intimidation after producing two fantastic encounters is sad. The fact that Real Madrid have now had 6 players sent off in 6 games against Barcelona coupled with Mourinho being dismissed and mass brawls on the pitch and touchline, does not suggest a manager fully in control of the situation he has created.

Long have we heard the rumours that Mourinhos next job is taking on what many people feel will be the hardest task of all, following in the steps of Sir Alex Ferguson.

After his antics of recent months in Spain however is he the right man for the job and can he manage with the principles of how United fans expect their teams to play?

The El Classico games are the most anticipated in Europe right now, with Madrid attempting to catch up and replicate the success that Barcelona have enjoyed in the last 3/4 years in Spain and the Champions League.

Its a huge task to try and catch up then overtake a team in Barcelona that is currently head and shoulders above the rest of Europe. If you were to suggest one man that would take on this challenge and have the ‘grapes’ to complete it then it is Mourinho. After enjoying success in Portugal, England and then Italy, the expectation was of more of the same in Spain. Tackling a team such as Barcelona who are playing argurably the greatest football of their history is different however to the jobs he has done previously.

If you look at the success he achieved elsewhere he has not had such a rival prepared to push him and his team so far.
In Portugal he had a team in Porto that were much stronger than most rivals and he was able to use spending power to widen the gap at the top.
In England United, Arsenal and Liverpool were in transitional periods that coupled with the vast spending power of Roman Ambramovich allowed him to take a strong team left by Claudio Ranieri to a title that was there for the taking.
The match rigging scandal that engulfed Italian football destroyed the major fighters for the league title, leaving an already strong Inter with few genuine challengers to the crown.

Not to suggest that Mourinho is anymore a lucky manager than other successful managers tend to be but its a valid point that the Real Madrid job is the first he has taken that gives him a genuine rival that he has to aspire to beat.

‘The Special One’ as he referred to himself in England has had a relative easy ride in terms of challenges at domestic level, having teams that were usually far too strong for the majority of competitors and coincided with many being in transition.

On the European level he has also enjoyed the luck that ‘good’ managers get, an offside goal for Porto against Man United, the ash cloud debacle for Barcelona and teams in both finals that were weaker than many other teams in both years competitions.

That is not to be critical of Mourinho for these reasons, you play the hand you’re dealt and Jose has called peoples’ bluffs on many occasions but now he’s at a poker table with a high roller he can’t easily intimidate.

Can he build a new team with a new style of play and be successful?

Can he work under as a coach under a management struture that doesn’t give him total control?

Can he win over the media and fans in a country where his support is minimal?

Mourinhos’ teams have always been built on a balance of skill and power. At Chelsea the forward 3 of Robben, Drogba and Duff offered pace and power backed up in midfield by the strength of Makelele, Essien and Lampard. The same thing occurred at Inter with the strength of Eto’o, Milito and the guile of Sneidjer backed up by a solid 3 in the midfield of Stankovic, Zanetti and Cambiasso.

At Real Madrid he has attempted to replicate this with a strong front man of either Higuain or Benzema flanked by Ronaldo and Di Maria. The power in the midfield is not as obvious as previous clubs with either Khedira or Diarra providing a steel flanked by Alonso and Ozil to create.

The style of play in Spain is much more technical than in England and Italy at this time requiring a smarter way to play other than ‘bullying’ teams to victory in the way Chelsea and Inter did. The evidence of Mourinhos failure to find a solution to this against Barcelona was evident in the 5-0 trouncing early in the season and that the subsequent games at the end of the season descended into Real Madrid players kicking Barcelona off the park when they could catch them.

After being comprehensively outplayed at Wembley in May, Ferguson complimented Barcelona on the style of play and dominance, suggesting that they are the goal to reach and he will do what he can to attempt to reach them.

Mourinhos’ childish response to defeat last week was to label Barcelona a ‘small club’ and poke a coach in the eye after one of his players had lunged into Fabregas causing a huge bust up involving the players and touchline staff.

Make of that reaction what you will…

The way that Mourinho has approached the challenge of Barcelona has appeared to be to wind them up until they make an error and capitalise on it. This approach smacks of a man who does not believe in his own tools, feeling the need to stifle the opposition rather than make them worry about you.

However much criticism Ferguson takes from the media, fans and opposition fans, he will always look to make the opponent worry about his team rather than stifle them. The whole idea is essentially an admittance that Mourinho doesn’t have a ‘football’ answer to the problem different from the style he employed at previous clubs.

Manchester United fans demand attractive, attacking football from their teams. It is something that has been with every generation of fan and is a must for any new manager that comes in. The chant of ‘Attack, Attack, Attack’ is a regular on the terraces emphasising that it is not just about winning for the fans.

The early signs in Madrid this season is that Mourinho has been able to alter the Madrid team slightly to make them less pragmatic and more pleasing on the eye but underneath that is still the visible anger and aggression as proven at the end of the game when the melee ensued.

Could we see any current manager in England behave in the way Mourinho did, basically gouging at a coaches eye? The answer is no without a doubt, for all the complaints and unhappiness with the English FA they would not allow such behaviour to go unpunished.

The reaction of Mourinho suggests a man who is struggling to control himself and his feelings as he attempts to get Madrid to a level to compete with Barcelona. So what would happen should a similar situation occur in a derby match or against Liverpool for example? Its becoming clearer that Mourinho has become too much of a law unto himself in the last 18 months. The illusion of grandeur fed to him through the media and the ‘Special One’ tag has created a man who doesnt believe the rules apply to him, he do things his own way and to hell with everyone else.

Sir Alex Ferguson has been punished for times he has crossed the line and rightly so. He has however always defended his team in the right way and given credit where it is due. As the head and leader of such a big club it is important that a balance is struck between doing all you can for your club and then going too far. Mourinho does not have that balance and it seems he basks in the spotlight and ignomy he causes with the bad behaviour just as much as he craves the spotlight of success.

As people such as Sir Bobby Charlton sit in the stand at United and show the ideals the club strives for, can we have a manager in the digout who appears to be out for himself and doesn’t give a damn about the headlines he creates or the disrespect he shows to others?

Clubs still stand for something in society and with a leader such as the current Mourinho at the head of our club it could harm the very name of Manchester United.

10 Comments on Has Mourinho Blown His Chance Of Following Sir Alex?