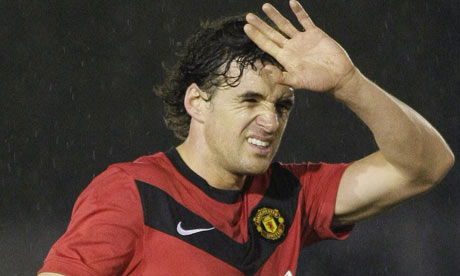 The Premier League have published the complete list of released players in England’s top flight. On it are five Manchester United players and four former United Academy players.

Four of the five players were already known about to fans: Owen Hargreaves, Gary Neville, Paul Scholes, Edwin van der Sar – the latter three all retiring from professional football. Neville has become a club Ambassador whilst also signing to work as a pundit on Sky Sports. Scholes will stay at the club and do some coaching with the young players, potentially even the Reserves. Edwin’s future is unclear, the club would no doubt want him to stay but he’d always maintained he’d take a year out. The new project at Ajax with many old players returning to the board may intrigue him.

The fifth name on the list of released players is Conor Devlin, the young Northern Irish goalkeeper. Conor played an important role in the Academy’s success in 09/10 with important saves in his twenty appearances. This season he was all set to have a step-up season in the Reserves after Heaton, Foster and Zieler left last summer but he hasn’t even featured in half of the games at that level. Despite being on the short side, Devlin has improved his catching immeasurably. His kicking and shot-stopping are solid but he has sometimes struggled with his concentration, spilling shots, letting balls squirm under him, and making errors. His release is a little surprising given it only leaves Sam Johnstone as a goalkeeper at Reserve level next year. Ben Amos is at a point now where a good loan will benefit him rather than another year in the Reserves.

Meanwhile, one player not being released is Luke Giverin. The young fullback will progress from the Academy to the Reserves along with the rest of the successful FAYC winning U18 team and he’ll sign his first professional contract with the club having previously only been on a part-time deal.