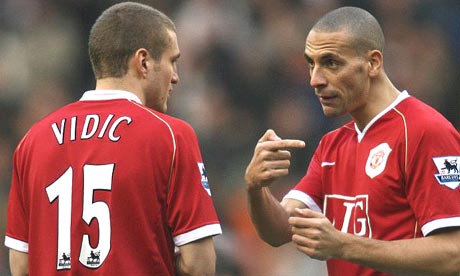 Today we complete the defence of the Stretford-End XI with our centre backs poll. Since there are obviously two centre backs in a 4-4-2, there will be two votes per person. Today’s contenders are Bill Foulkes, Martin Buchan, Steve Bruce, Garry Pallister, Jaap Stam, Rio Ferdinand, and Nemanja Vidic. The top two players will be included in our Stretford-End XI.

A survivor of the Munich air disaster, Bill Foulkes played a major role in the rebuilding of Manchester United. Foulkes represented United on 688 occasions, which is the third most appearances in the history of club. Following the disaster, Foulkes became captain of the team and led them to the FA Cup final in 1958. He was also in the squad that won the club’s first European Cup in 1968.

A former captain of Manchester United, Martin Buchan made 456 appearances for the club. Buchan was a member of the 1977 FA Cup-winning side that beat Liverpool 2-1 in the final. Though he did not play in the final, Buchan was still with United when they won the 1983 FA Cup. He now works for the Professional Footballers’ Association.

Scoring 51 goals in 414 appearances, Steve Bruce cearly had an impressive ability to score goals as a defender. Bruce played for the club from 1987 until 1996, and was a mainstay during the club’s rebuilding under Sir Alex Ferguson. In 1993/94, Bruce became the first English player to captain a side to The Double. Despite playing such an important role for United, somewhat surprisingly Bruce never earned an international cap. He went on to have a fairly successful career in management, and is currently in charge at Sunderland.

Forming one of the game’s best central defensive partnerships with the previous candidate, Gary Pallister made 437 for Manchester United between 1989 and 1998. Pallister’s move to United was the most expensive transfer between British clubs at the time. While Pallister was at United, the club won an impressive four Premier League titles and three FA Cups. He now works as a TV football pundit.

Dutchman Jaap Stam is quite possibly the only player that has caused Sir Alex Ferguson to admit he was wrong. The gaffer admitted that selling Stam to Lazio in 2001 was a mistake. When Stam signed in 1998, he was then the most expensive Dutch footballer in history. He was a member of the 1999 Treble-winning squad, and also featured in the PFA Team of the Year in each of his three seasons at Old Trafford. Stam currently works as a scout for United, focusing primarily on South America.