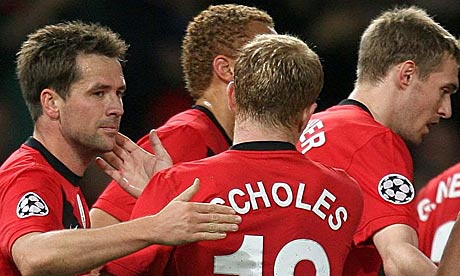 Manchester United qualified for the next stage of the Champions League despite being, for large stages, absolutely diabolical in this group match against their Russian opponents.

Sir Alex Ferguson, with the Sunday game at Stamford Bridge and injuries weighing heavily on his mind, made a series of changes to his side starting with a completely new back 4 and a front line of Macheda and Owen to give the team a feel that was more Carling Cup than Champions League.

That feeling clearly transmitted to the team who were slow and sluggish to react against opposition that were clearly there for the taking – however early warning signs were not heeded as CSKA benefitted again from the fearlessness of their young front line to score through Dzagoev whose fantastic angled drive completely outfoxed Edwin van der Sar. That sparked a frenetic 7 minutes that featured first Michael Owen scoring an equaliser from an extravagant Nani backheel and then Krasic restoring the lead for the visitors who took advantage of a static defence.

United, last seasons finalists, were less than encouraging in response and went into half time with no threat. Sir Alex gave the issue for a more disciplined defence in the second half but all thoughts of that were out of the window when a set piece in the opening moments was awfully defended and Berezutsky exploited his space by scoring across van der Sar to make it 3-1.

A reprieve was needed and was almost handed immediately when Fletcher was blatantly tripped in the area, however the Portuguese referee inexplicably cautioned the Scot, presumably for simulation. The Red Devils response was hardly immediate or enthusiastic. Rooney and Evra came on with the intention of injecting some energy and penetration into the side and the results were inititally inconclusive. With around 10 minutes to go United did start to press the goal and with his last action before being substituted for Obertan, Macheda almost scored, his fine header coming back off the post. CSKA keeper Akinfeev was also equal to an effort from Rooney.

Obertan’s introduction did open up a more fluent pattern but it was from the right hand side that salvation seemed possible when Gary Neville of all people sent in a free kick that Paul Scholes suddenly became the 12 year younger re-incarnation of himself to cleverly head the ball in.

United attacked relentlessly after this and the pressure told when Valencia, who had been found desperately wanting when a big performance was required, received the huge dose of luck that the team was perhaps due after the Fletcher penalty decision and saw his injury time 20 yard strike take a heavy deflection and give the brilliant Akinfeev no chance as it floated into the centre of the goal.

The points were shared and Sir Alex was forced to reflect on the super spirit of the team to keep fighting to the bitter end, although the glaring defincincies that became apparent in several areas of the team will surely play heavily on his mind.