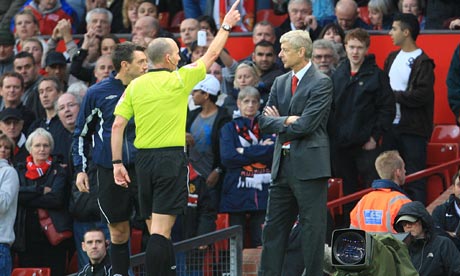 Arsenal manager Arsene Wenger has claimed that his Arsenal team is ‘stronger’ than both Manchester United and Manchester City – despite losing to both teams within the past month. Wenger believes that on the basis of those matches – in which Arsenal conceded six goals and scored three – Arsenal have a claim to be the stronger team. Wenger also cited injuries to key players being a main factor.

The Arsenal boss was quoted as saying:

“There is a belief after the games against Manchester United and Manchester City that we are stronger than them, we have to transfer that into points and wins. I am not talking about the whole package, but on the basis of that match we should not have any inferiority complex. We’ll see when the season ends. I had £30m in the summer, and I spent £10m on Vermaelen. Apart from that I did not want to buy. We have an unbelievable squad. Against Wigan, Bendtner was on the bench, Walcott, Arshavin, Nasri, Denilson did not play.”

Now – I know we’ll get the old ‘Wenger is the best manager that ever graced the earth’ and ‘Rooney dived‘ – but I think it quite a ridiculous comment. I agree that Arsenal should have got a point at Old Trafford three weeks ago – however, the same could have been said when United went to the Emirates last November and came away empty handed after a 2-1 defeat.

Most Arsenal fans will also admit that they need a holding midfielder and a goalkeeper – whilst Gael Clichy is still prone to losing concentration at critical moments – Arsenal are far from a perfect team. Unfortunately, the ugly commercialization of football has benefited Manchester City and although Arsenal play a much superior brand of football – they can’t compete financially (same as United) with City. United on the other hand have a great squad and an impressive number of youngsters on the way through.

Should Wenger have got something out of the game at Old Trafford? Yes, I think a draw was a fair result – but to state that Arsenal are ‘stronger’ than United is tad delusional if you ask me.

15 Comments on Wenger: Arsenal are stronger than United