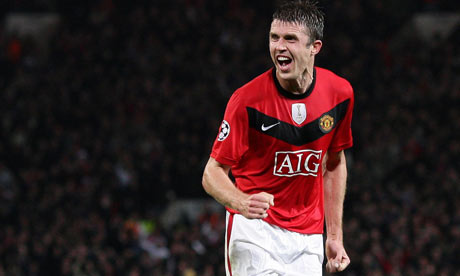 Manchester United kept up their 100% record in this season’s Champions League against German side Wolfsburg but the victory had a huge degree of luck as they had to come from behind.

The team selection prompted a few questions. Was Kuszczak’s selection a sign Foster had been dropped? The decision to play both Giggs and Valencia a similar sign for Nani? The decision to give Carrick and Owen game time seemed slightly straight forward but questions were being asked of the collective unit after an uncertain first 20 minutes in which United discovered that there was more to the German champions than their highly documented strike force.

The home side struggled to get a foothold of the game and it took until the end of that 20 minute spell to register a shot in – that being a Wayne Rooney 30 yard free kick that curled wide. It took a change of system for United to start imposing themselves and it came about from an all too familiar sight, as Michael Owen limped off with a groin injury. Given the forward’s luck with injuries Sir Alex Ferguson will hope that this latest knock will be the exception rather than the rule.

In any event, it was Owen’s replacement, Dimitar Berbatov who changed the face of the game. There has been debate over the Bulgarian’s form and on this very blog, debate over the respective merits of what Owen and Berbatov bring to the team. But the new addition made a significant impact, completely changing the shape of the game and adding a creative dimension. First of all he set up Antonio Valencia who dragged his shot wide when he should have done better, before creating an even better chance for Michael Carrick who saw his shot expertly saved, and in between those two chances created a goal for Rooney that was wrongly ruled offside.

Despite the noticeable upturn in domination the first half finished goalless. And worse still, the second half started in a similar fashion to how the first half did, with the visitors looking confident in an attempt to impose themselves, as Berbatov’s promising first half performance descended into anonymity. After Anderson had seen a chance smartly saved, Wolfsburg broke and took the lead. Imposing striker Edin Dzeko rose to head home but looked in a slightly offside position – at the very least it could be said that the linesman on that side was exercising his discretion in declaring a legitimate goal after deciding the Rooney “goal” in the first half was offside, but even so, the goal was expertly converted.

United did come back into the game, hitting back almost immediately – it’s almost a damning verdict of those players who have either recently joined the club or those experienced enough to assume the responsibility that it was Ryan Giggs yet again who proved the difference. It is, of course, a testament to the Welshman’s undoubted class but it would be naivety of childlike proportions to expect his veteran legs alone to rescue the club on as frequent a basis as he has been required to already at this stage of the season. It is not beyond imagination, of course, but it would be churlish to rely on such factors in the same manner for the rest of the campaign.

Nonetheless it was Giggs – with the benefit of a huge deflection – who restored parity with a free kick that was won by Anderson’s quick movement. It was Giggs’ 150th goal for the club, although he claimed afterwards to not know of the landmark, and it may be just as well if the dubious goals committee get their hands on it.

Relief almost turned to unexpected and undeserved delirium two minutes later when Giggs’ quick thinking from a corner almost led to Rooney scoring an exquisite curler. Giggs did have the ball in the net again but it was disallowed for offside, and although United probably had half a case to feel aggrieved given the ball ricocheted off the thigh of an away defender, there was a clear offside in the “first phase of play”. Regardless of this United probed and found a way through, inevitably through Giggs, assisting the ever improving Carrick who began the game misplacing passes sloppily and ended it spraying around like a maestro. A move down the left hand side resulted in United’s number 11 smartly finding Carrick who curled home from 18 yards with little over 10 minutes left.

The result was, from that point, pretty straight forward, though there were several problems in the Red Devils performance. The lack of urgency and domination was probably first and foremost in Ferguson’s mind; the over reliance on Giggs seemed to be immediately clear as soon as United conceded, and Nemanja Vidic was fortunate (to be kind) to remain on the pitch until the final whistle after a couple of extremely clumsy challenges.

It may not have been a completely satisfying evening for United who were given far more trouble than they seemed to anticipate, but the resilience in the side seems to be as impressive as it has been for a long time, and that is a huge positive to take out of the game.